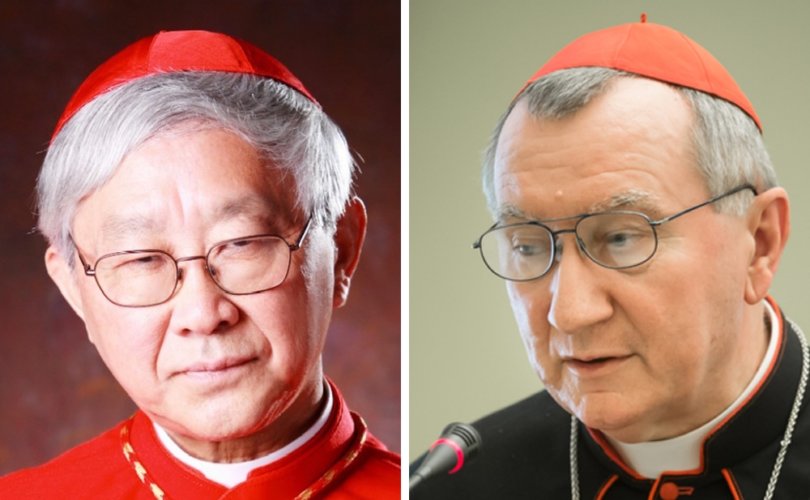 HONG KONG, September 21, 2018 (LifeSiteNews) – Cardinal Joseph Zen of Hong Kong is calling for the Vatican secretary of state to resign over the Holy See’s impending deal with China that he says is “an incredible betrayal.”

Secretary of State Cardinal Pietro Parolin, who is considered papabile, was chief negotiator in the agreement that is expected to be finalized when a Vatican delegation travels to China at the end of this month, according to AsiaNews.

America Magazine reported Tuesday a Vatican source confirmed “a high-level Holy See delegation will travel to the Chinese capital for the signing and that a date has already been fixed for this ground-breaking event.”

What is known of the deal, first referred to in February 2017, is that Beijing will acknowledge the pope as head of the Catholic Church in China but will have final say in appointing bishops, although the pope has a veto.

The Vatican has agreed to recognize and consecrate seven illegitimate “bishops” installed by the communist-controlled Catholic Patriotic Association and which the Holy See had previously rejected.

The Vatican has also requested, as part of the agreement, that two bishops from the persecuted Underground church step down in favor of “bishops” from the Patriotic church.

Zen has consistently fiercely opposed what is being hailed in some progressive quarters as a landmark agreement re-establishing diplomatic relations between Beijing and the Holy See after 70 years.

“They’re giving the flock into the mouths of the wolves. It’s an incredible betrayal,” the 86-year-old retired bishop of Hong Kong told Reuters in an interview published Thursday.

“The consequences will be tragic and long lasting, not only for the church in China, but for the whole church because it damages the credibility,” Zen told Reuters.

Zen told Reuters that Parolin, the Vatican’s highest diplomat, doesn’t seem to have high regard for the Catholic faith.

“I don’t think he has faith. He is just a good diplomat in a very secular, mundane meaning,” Zen said.

“He should resign,”  he added.  “It’s a complete surrender … I have no other words.”

Parolin was named by former U.S. nuncio Archbishop Carlo Viganò also in his explosive August testimony. Viganò alleges the secretary of state was among the high-ranking prelates who covered up the serial sexual abuse of ex-Cardinal Theodore McCarrick.

“As Nuncio to Washington, I wrote to Cardinal Parolin asking him if the sanctions imposed on McCarrick by Pope Benedict were still valid,” Viganò wrote. “Ça va sans dire that my letter never received any reply!”

Parolin has also defended the pope's controversial document on the family Amoris laetitia as a “paradigm shift” for the Church.

Zen traveled to Rome in January to warn Pope Francis of the deal after the news broke the Holy See was asking two Underground bishops to step aside for state-endorsed prelates.

Cardinal Zen has long mistrusted Parolin, warning Pope Francis in 2013 that when it came to China, his newly appointed to secretary of state “has a poisoned mind. He is very sweet, but I have no trust in this person. He believes in diplomacy, not in our faith,” he told Crux at that time.

But Francis nevertheless directed Parolin to re-establish negotiations with Beijing — which Benedict broke off before he resigned — and try to broker an agreement, Crux reported.

China expert Steve Mosher, head of Population Research Institute and author of Bully of Asia, accuses Parolin of making enormous blunders in China, which will be paid for by the country’s persecuted Catholics.

Parolin’s blunders began in 2005 when as a high-ranking diplomat he established direct contact with Beijing “with the goal of signing a written agreement with the atheistic regime over the appointment of bishops,” Mosher wrote in One Peter Five.

At this point, China’s estimated 12 million Catholics had settled into a far from ideal but “workable” solution to overcome the painful divide between the Underground church and the Communist-run Patriotic church.

In the general amnesty declared after the end of the Cultural Revolution, Underground bishops and priests imprisoned for decades for refusing to join the Patriotic church were released, and began evangelizing throughout China, wrote Mosher.

“By common agreement” the Communist Party and agents, although an ever-present “brooding, hostile” presence, were “kept out of the local arrangements that allowed Catholics from both [Patriotic and Underground churches] to coexist, even cooperate.”

Underground bishops, “with the permission of the Vatican, named their own successors. The Patriotic Association named its own bishops, but these then almost always sought, and almost always got, consecration by the pope,” Mosher observed.

But when Parolin came seeking negotiations, that essentially “put a target on the backs of Chinese Catholics. The ‘space’ in which it had operated began to shrink under the unblinking eye of state surveillance.”

And in Parolin’s current quest for an agreement, “not surprisingly, Beijing has gone for the jugular: the complete extinction of the Underground Church, starting with its bishops,” Mosher pointed out.

“This is why we have recently been treated to the heartbreaking spectacle of 88-year-old Underground bishop Peter Zhuang being forced, by Cardinal Parolin’s emissaries, to hand over his Shantou diocese to excommunicated Patriotic bishop Huang Bingzhang,” he wrote.

“This process will obviously continue until the last of the 30-odd Underground bishops have been sidelined and silenced, one way or another.”