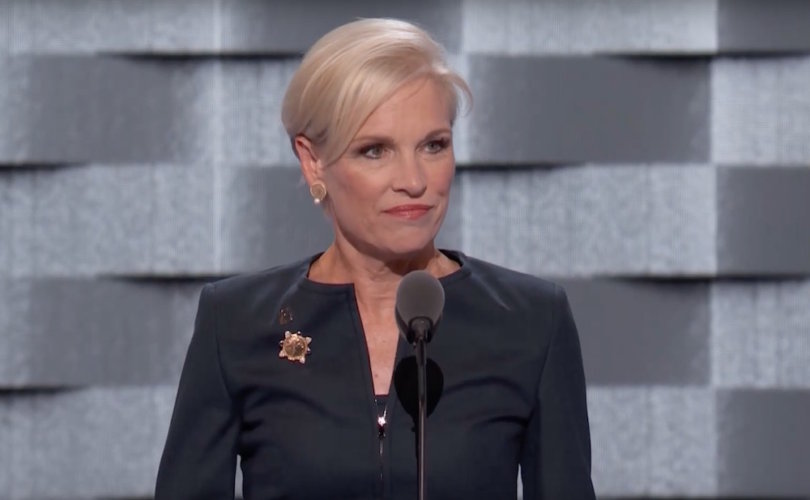 The CEO of Planned Parenthood stepped smartly to the podium last night after the announcer mispronounced her first name as “Cecil.”

Clinton “will always stand up for the right of every woman to access a full range of reproductive health care, including abortion, no matter her economic status,” she added.

Clinton, who officially clinched the Democratic presidential nomination last night after being nominated by former rival Bernie Sanders, has campaigned on a promise to repeal or amend two laws that protect U.S. taxpayers from funding abortion at home and overseas. The Hyde Amendment, which prevents Medicaid funding of abortion except in the cases of rape or incest, was signed in 1977 by Democratic President Jimmy Carter, who also addressed the convention by video last night. The 1973 Helms Amendment prohibits U.S. foreign aid from underwriting abortions in foreign nations.

The 2016 Democratic Party platform commits to repealing both laws, which enjoy the support of a lopsided majority of the American people.

Richards’ original remarks, as prepared for delivery, said Clinton “will always stand up for Roe v. Wade,” the 1973 Supreme Court case that, with Doe v. Bolton, struck down state pro-life laws nationwide. Clinton told Planned Parenthood in February that one of her “litmus tests” for judicial nominees was a commitment to “preserve Roe v. Wade.” Both Clintons began raising the issue of Supreme Court justices on the campaign trail before the death of Justice Antonin Scalia left a vacancy on the nation’s highest court.

“Just last month, the Supreme Court ruled that the Texas laws that forced abortion providers to close their doors are dangerous and they are unconstitutional,” said Richards, referring to the Whole Women’s Health decision. “But the fight's not over. Donald Trump has pledged to appoint justices who will overturn Roe v. Wade and undo decades of progress.”

She said the Republican presidential nominee’s views are “rooted in a deeply disturbing worldview.”

“He wants to punish women for having abortions,” she said. In March, Donald Trump told Chris Matthews that post-abortive women should face “some form of punishment,” a remark roundly condemned as out-of-touch with the pro-life viewpoint. His pro-abortion foes have cited those remarks, which Rush Limbaugh said would be “hugely damaging” to Republicans in November, ever since.

Richards contrasted the GOP ticket with Clinton and “her running mate Tim Kaine, a man who has been a champion for women and families his entire lifetime.” She said last Friday that Planned Parenthood was “very enthused” about the selection of Kaine.

During her speech – which preceded Bill Clinton’s speech, as it did in 2012 – implied that defunding Planned Parenthood would increase the incidence of breast cancer.

She referenced Dayna Farris Fisher, a woman who beat breast cancer but “couldn't have done it without Vivian, the Planned Parenthood clinician who stuck with her all the way through treatment.”

“When Donald Trump and Mike Pence say they'll defund Planned Parenthood, they're talking about cutting women like Dayna off of lifesaving care,” she said.

Dozens of academic studies have shown that abortion poses a significant risk to women’s health by increasing their chances of developing breast cancer, as does hormonal contraception, which Planned Parenthood distributes at taxpayer expense.

After years of making misleading remarks, Richards admitted under oath to Congress last year that Planned Parenthood does not perform mammograms, the medically indicated procedure for detecting breast cancer.

Richards' speech, her second to a DNC convention, drew a positive reception from some – but not all – delegates.

Richards was not the only speaker to vouch for Clinton's abortion position.

“We can count on Hillary to protect our right to choose,” said Sen. Barbara Boxer, D-CA. “Her opponent said a woman should be 'punished' for exercising her right to choose and then picked a running mate who believes Roe v. Wade belongs in the ‘ash heap of history.’ Well, I have a message for Donald Trump and Mike Pence: We are not going back to the dark days when women died in back alleys. We are never, ever going back! Never!”

After Richards alluded to her mother, the late Ann Richards, the last Democratic governor of Texas, she concluded, “Let's go win this election.”