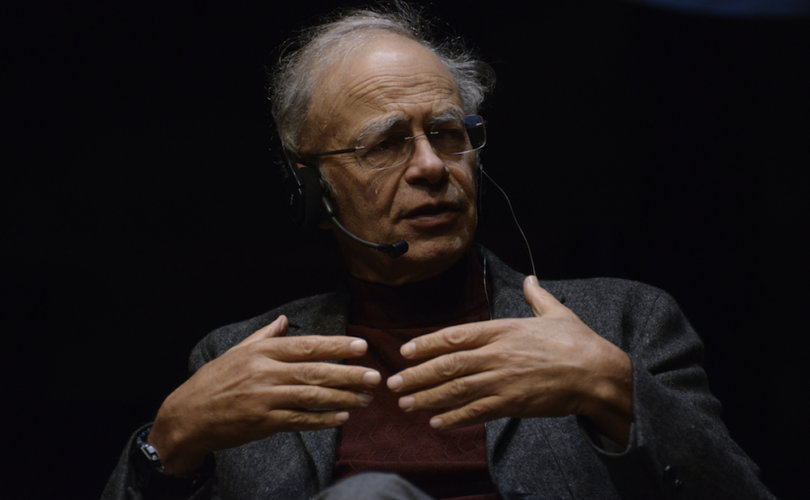 NEW YORK, April 7, 2017 (LifeSiteNews) – It may be ethical in some situations to rape a mentally disabled person, according to controversial Princeton bioethicist Peter Singer in an article he co-wrote and The New York Times published this week.

The argument made by Singer and Oxford moral philosopher Jeff McMahan is not hypothetical. Their article, “Who is the Victim in the Anna Stubblefield Case,” is two-pronged defense of Stubblefield, a fellow ethicist recently convicted of sexually assaulting a 29-year-old man with severe cerebral palsy.

The first prong is a relatively unobjectionable re-argument of the defense case. Stubblefield utilized a highly subjective and disputed technique called “facilitated communication” to befriend the man, known as D.J. “Over a two-year period in which she believes she communicated with him often and deeply,” McMahan and Singer relate, “she came to love him and to believe that he loved her and indicated his wish to have sex with her.”

They did have sex, but when she told his family, they sued her and went to the police. Then came a jury trial, a conviction and a 12-year prison sentence. Singer and McMahan say the judge prevented the defense from making a case that D.J. was a cognitively aware adult mentally and morally capable of consenting to sex. They contend that the judge allowed the jury to see only minimal evidence of the validity of “facilitated communication” and prevented D.J. from testifying because she accepted the prosecution’s and family’s position that D.J. was mentally and physically incapacitated. The conviction is being appealed.

This part of the Times article is reasonable, say observers. However, it is the second prong of Singer and McMahan’s case that is alarming, both to defenders of the disabled and to critics of Singer’s controversial equation of humanity with mental capacity.

In effect, the two bioethicists say that, if the prosecution is right and D.J. is mentally incapacitated, then Stubblefield has done him no real harm in having sexual intercourse with him and, arguably, some good.

“If we assume that he is profoundly cognitively impaired … in that case, he is incapable of giving or withholding informed consent to sexual relations; indeed, he may lack the concept of consent altogether,” they write.

“On the assumption that he is profoundly cognitively impaired, therefore, it seems that if Stubblefield wronged or harmed him, it must have been in a way that he is incapable of understanding and that affected his experience only pleasurably.”

Writing in Current Affairs, which he edits, Nathan Robinson said Singer [and McMahan] might have won plaudits from the disabled community if they had simply asserted D.J.’s right to prove his cognitive ability in court.

“Instead, he decided to give another defense of Stubblefield, and in doing so offer one of his most outrageous arguments yet: it might actually not be bad to rape cognitively impaired people.”

For Robinson, this is creepily close to Singer’s previous devaluations of the disabled, especially if newborn. Singer’s utilitarian moral philosophy values people — and animals — for their power to think, be self-aware and experience pleasure. In 1979, for example, he wrote, “Human babies are not born self-aware, or capable of grasping that they exist over time. They are not persons.” Therefore, he reasoned, “the life of a newborn is of less value than the life of a pig, a dog, or a chimpanzee.”

Later, he defended the killing of disabled newborns based on how little pleasure they could be expected to experience. He argued that the prudent disposal of children be allowed for up to 30 days after birth — time enough to discover their defects. Other factors that might enter into Singer’s calculus: Would caring for a disabled child give the parents pleasure? Then let it live. On the other hand, if a couple killed their disabled child, might they then have another child with much more capacity to enjoy life? Then kill the disabled child.

“This kind of stuff (repeated again and again),” Robinson added, “has led some disabled people to get the not unreasonable impression that Peter Singer, perhaps the world’s most prominent ethicist, would prefer it if they died.”

Groups such as Not Dead Yet opposed his hiring by Princeton University. Robinson says the problem goes beyond Princeton. He condemns utilitarians in general for being “meticulous and Spock-like in their deductions from premises. … Utilitarians constantly end up endorsing the moral necessity of an endless number of inhumane acts. It’s a terrible philosophy that leads to brutal and perverse conclusions and, at its worst, it turns you into Peter Singer.”

Robinson says The New York Times should never have run Singer and McMahan’s piece, attributing its action to stupidity or negligence. “Either way,” he concludes, “the continued presence of Peter Singer in national dialogue about disability shows just how far we have to go before people like D.J. will actually be granted their full humanity, by prosecutors and philosophers alike.”

This man supports bestiality, infanticide and experimenting on the disabled

Peter Singer: women's right to have children might have to be sacrificed