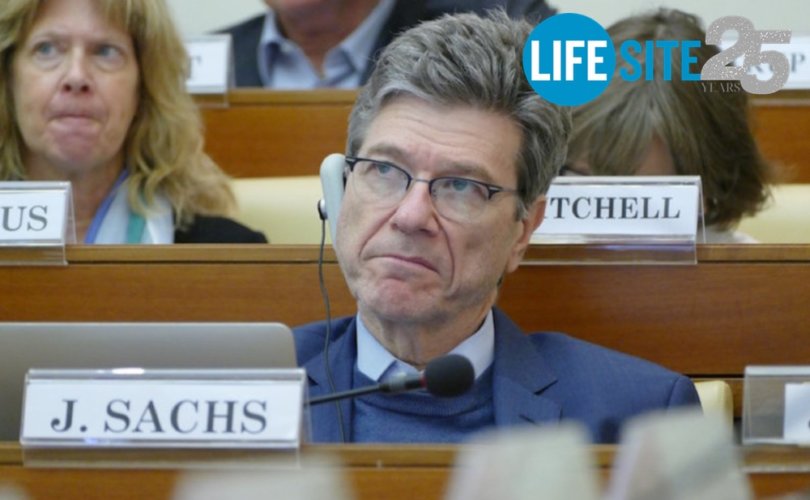 (LifeSiteNews) – In the halls of the Vatican where he was an invited speaker, famed population control advocate Jeffrey Sachs yelled, “You’re disgusting, you’re disgusting, disgusting,” at LifeSite’s John-Henry Westen in 2017, taking issue with being characterized as a “pro-abortion globalist.”

“I sat there rather stunned but also, I must admit, somewhat intimidated since this man marches in echelons of power far above the top one percent he is so fond of disparaging,” Westen wrote at the time.

“Imagine someone who approved of men raping women, even lobbied for it, didn’t insist on it mind you, just supported its legalization. Would Mr. Sachs be faulted for referring to that person as pro-rape even over their objections that they should be called ‘pro-choice’ instead?” LifeSite’s editor-in-chief wondered. “It seems we are speaking a different language, and that the terminology of the pro-life movement is so foreign that it is completely misunderstood. Language is an important thing when it comes to trying to make convincing points in the public square, and it appears Mr. Sachs refuses to be labeled by what in his mind must be antiquated terminology.”

LifeSiteNews was ahead of the curve in sounding the alarm about troubling developments at the Vatican during the Francis pontificate; just four years into his papacy, Pope Francis had already released Amoris Laetitia, made comments about the Zika virus and contraception that contradicted Church teaching, sacked or replaced orthodox prelates in prominent Vatican positions and promoted heterodox clerics, and referred to a woman who underwent a so-called sex-change operation as a “man.” He had praised notorious abortionist Emma Bonino, the Vatican had released a scandalous sex-ed program, Francis had made numerous disparaging comments about faithful Catholics, and the Vatican hosted a bizarre and sacrilegious light show on the façade of St. Peter’s Basilica (this is by no means an exhaustive list).

ROME, November 6, 2017 (LifeSiteNews) – “You’re disgusting, you’re disgusting, disgusting,” yelled world-renowned economist Jeffrey Sachs in the hallowed halls of the Casina Pio IV in the heart of the Vatican Gardens. Sachs, the Columbia University professor whose monthly newspaper columns appear in more than 100 countries, was in a full rage, threateningly pointing his finger in the face of this reporter during his outburst. I sat there rather stunned but also, I must admit, somewhat intimidated since this man marches in echelons of power far above the top one percent he is so fond of disparaging.

A collaborator with George Soros, Sachs is known around the world as a guru on climate change, sustainable development — and to pro-lifers — population control and abortion. It is this pro-life concern that was the source of his rage. He was railing against me because of an article I wrote the previous day in which the headline referred to him as a “pro-abortion globalist.”

I believe he would have been fine with a label of “pro-choice,” but I didn’t get to ask him despite trying a couple of times to speak to him after the fireworks. He vehemently resents being called pro-abortion, he let me know in rather uncivil terms.

From the pro-life perspective, the “choice” of abortion is murder and today’s abortion holocaust with some 60 million innocent victims per year is a global catastrophe very much like what Sachs claims will happen with unchecked global warming. If someone believes that abortion is an acceptable “choice”, that person is indeed pro-abortion.

Imagine someone who approved of men raping women, even lobbied for it, didn’t insist on it mind you, just supported its legalization. Would Mr. Sachs be faulted for referring to that person as pro-rape even over their objections that they should be called “pro-choice” instead?

It seems we are speaking a different language, and that the terminology of the pro-life movement is so foreign that it is completely misunderstood. Language is an important thing when it comes to trying to make convincing points in the public square, and it appears Mr. Sachs refuses to be labeled by what in his mind must be antiquated terminology.

“I’m not so sure about all the differences because I’m not an expert on the Vatican,” replied Professor Dasgupta. “I’m here as a social scientist in the Academy and we speak about common problems that humanity faces. As you observed that is what we’re doing. I don’t know about differences at all. We come with whatever knowledge we have and we put forward ideas to see how they conform to the evidence. That’s it.”

I proposed that one of those differences centered around limiting population growth. I asked if that remained a focus for many of the participants or if they were perhaps moving away from that focus. “I don’t know what you mean. I don’t know that there was any discussion on population growth,” Dasgupta replied. Population was not on the agenda, but the issue nevertheless surfaced during a question-and-answer session a few hours later.

When I clarified that I meant historically many of the speakers have been advocates of limiting population, he responded, “I wouldn’t be able to tell you. I wasn’t involved in any of that.”

It is interesting to see Prof. Dasgupta’s past involvement in what pro-lifers would refer to as population control in light of his comments above.

In 1995 Prof. Dasgupta wrote an article titled, “The Population Problem: Theory and Evidence.” In this article, he looked for ways to lower the desire of couples to have children. “The analysis presented here suggests that the way to reduce fertility would be to break the destructive spiral where such a spiral is in operation,” he wrote. “Because parental demand for children, rather than an unmet need for contraceptives, in great measure explains reproductive behavior in poor countries, we should try to identify policies that would so change the options men and women face that their reasoned choice would be to lower their fertility.”

Later in the same article he speaks of shifting economic policies so as to give the impression that children are a financial burden to be avoided. “Providing infrastructural goods, such as cheap fuel and potable water, will reduce the usefulness of extra hands.  When a child becomes perceived as expensive, we may finally have a hope of dislodging the rapacious hold of high fertility rates.”

Professor Dasgupta could perhaps be forgiven for forgetting about a single article promoting population control over 20 years ago. However, in 2013, Dasgupta wrote an article for Science Magazine titled, “Pervasive Externalities at the Population, Consumption, and Environment Nexus.” In the article, Dasgupta argues that population growth is placing an undue burden on available resources, decrying the lack of availability and use of contraception. He says: “Family planning is not subject to the play of ‘free markets’; it is biased by restrictive laws, widespread misinformation, and rules not based on evidence. The unmet need for family planning is substantial.”

Later in the same article he adds, “When the barriers,” to acquiring contraception, “are numerous, as in the Philippines, the poor both have more children and a greater unmet need for family planning.”

“The aggregate demand for environmental resources is, in part, a function of humanity’s population size,” he wrote. “Whether world population reaches 8 billion or 10 billion in 2050 and whether it reaches 15 billion or 17 billion in 2100 will depend on small differences in average family size, which could be highly influenced by rebuilding the focus on family planning.”

Prof. Dasgupta seems not to have changed his views on population control, but he has developed euphemisms to conceal his intentions from the developing nations which would balk at his proposals otherwise.

He explains his vision to LifeSiteNews as nothing controversial at all. “We are discussing human impact on the biosphere, and that’s all,” he said. “Climate change is a symptom of a problem of over-extraction of the biosphere. I suppose the evidence is pretty compelling that we are and we’re trying to find ways to reduce it. To reduce our demand on the biosphere. That seems to me to be uncontroversial.”

Sachs too employs euphemisms to mask his intentions, but has in the past been more forthcoming.

In his 2008 book Commonwealth: Economics for a Crowded Planet he promoted legal abortion. “In countries with legal abortion services, households have a lower-risk and lower-cost option,” he wrote. “Legalization of abortion reduces a country’s [total fertility rate] significantly … and also reduces maternal mortality.”

More recently Sachs was one of the driving forces behind the passage of the Sustainable Development Goals. Target 3.7 of the SDGs explicitly calls for “universal access to sexual and reproductive health care services.” But in order to understand what that means, one has to look at the definition of those terms which were defined at the 1994 Cairo conference to mean providing women with “modern contraception” for “family planning” and with “safe abortion” where it is legal.

With research files from Michael Hichborn of the Lepanto Institute.