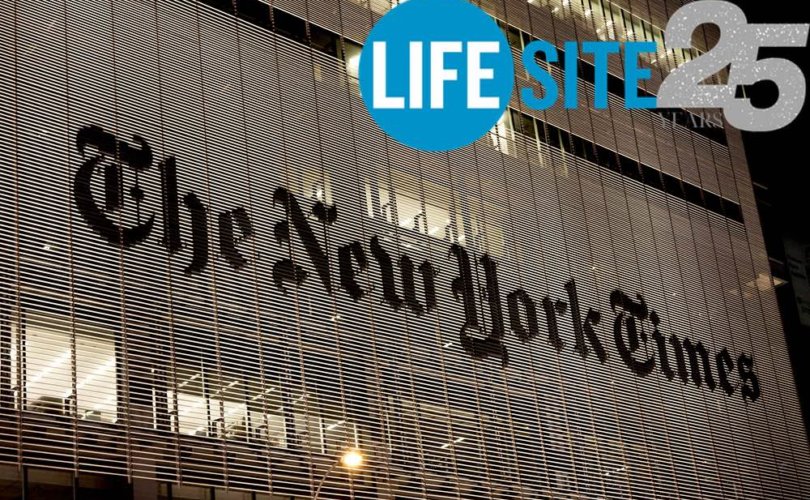 (LifeSiteNews) – LifeSiteNews started 2007 off with a bang when we forced the New York Times to admit that its magazine had erroneously reported that a woman in El Salvador was jailed for 30 years for an illegal abortion at 18 weeks. She had actually been convicted of murdering her full-term newborn.

LifeSiteNews obtained court records which indicated the case in question was actually one of infanticide rather than illegal abortion. While it was investigated on the suspicion of an illegal abortion, authorities found the dead baby hidden in a box wrapped in bags under the bed of Carmen Climaco. Forensic examination showed that the child was breathing at the time of birth. The legal opinion of the cause of death was asphyxia by strangulation.

Major television and radio talk show in the United States covered the story, which also spread like wildfire throughout El Salvador. A couple of weeks later, the Times finally issued a correction.

With information from contacts in El Salvador, LifeSiteNews pointed out in late November 2006 that the cover article in the New York Times magazine of April 9, 2006 claimed falsely that some women in El Salvador were imprisoned for 30 years for illegal abortions.

The editor’s note in the magazine’s corrections section on January 7, 2007 stated: “The Times should have obtained the text of the ruling of the three-judge panel before the article was published, but did not vigorously pursue the document until details of the ruling were brought to the attention of editors in late November.”

Then-public editor (ombudsman) for the New York Times Byron Calame admitted in a 1,500-word piece that “Complaints about the article began arriving at the paper after an anti-abortion Web site, LifeSiteNews.com, reported on Nov. 27 that the court had found that Ms. Climaco’s pregnancy ended with a full-term live birth.”

“Seizing on the misleading presentation of the article’s only example of a 30-year jail sentence for an abortion, the site urged viewers to complain to the publisher and the president of The Times. A few came to me,” he wrote.

(LifeSite readers who expressed their concerns told us that they’d had their emails rebuffed with form-letter responses from the Times indicating that there was “no reason to doubt the accuracy of the facts as reported.”)

The main source of the New York Times‘ false claim on which the magazine cover story was premised came from a pro-abortion group called IPAS. The group stood to profit financially from the legalization of abortion in El Salvador since it sells vacuum aspirators used for abortion and incomplete abortion.

LifeSite’s coverage of life and family issues in 2007 was far-reaching and impactful beyond the now-infamous New York Times correction. LifeSiteNews also produced likely by far the Internet’s most extensive series of reports, with numerous photos, of the 2007 March for Life in Washington, D.C. and Canada’s National March for Life.

And in 2007, thanks to LifeSite pointing it out, more than 17,000 people were introduced to and downloaded a very powerful tool for pro-life evangelization – namely the “Happy Birthday” music video by the rap group Flipsyde. Although 17,000 downloads may not seem huge by LifeSite’s standards today – now, our videos regularly reach hundreds of thousands of viewers and we have tens of millions of regular readers – back then, at the advent of the internet and when LifeSite was only five years old, it was a big deal.

LifeSite reporting in 2007 also led to the cancellation of a speech at a Social Justice conference by the Catholic Archdiocese of Winnipeg when we reported that while it was true that the scheduled speaker was a peace activist, he was also a very public homosexual activist, contrary to Catholic moral teaching; and an apology from a Ukrainian Catholic priest in Toronto after he had backed the nomination of a pro-abortion federal politician, and a public reprimand from the Ukrainian Catholic bishop. Meanwhile in 2007 LifeSite also sounded the alarm about the German government’s Ministry for Family Affairs promoting two booklets aimed at parents of toddlers and young children which advocated parent-child sexual massage. In addition to encouraging fathers to massage their infant daughters’ private parts, the documents encouraged unlimited masturbation. Thanks in part to LifeSite’s reporting, and concerned readers making their objections known, the booklets were removed from circulation.

That year LifeSite also drew attention to the plight of a German homeschooling family persecuted by the government under the country’s draconian anti-homeschooling law (a 1937 edict of Nazi Chancellor Adolf Hitler made homeschooling illegal).

In October 2007, LifeSiteNews was the first news service to break the story of then-San Francisco Archbishop George Niederauer giving Holy Communion to homosexual activists dressed as nuns. It exploded from there into many other news services. Eventually the archbishop publicly apologized.

Forcing a New York Times Correction and Other ways LifeSiteNews made a Difference in 2007 (December 7, 2007)