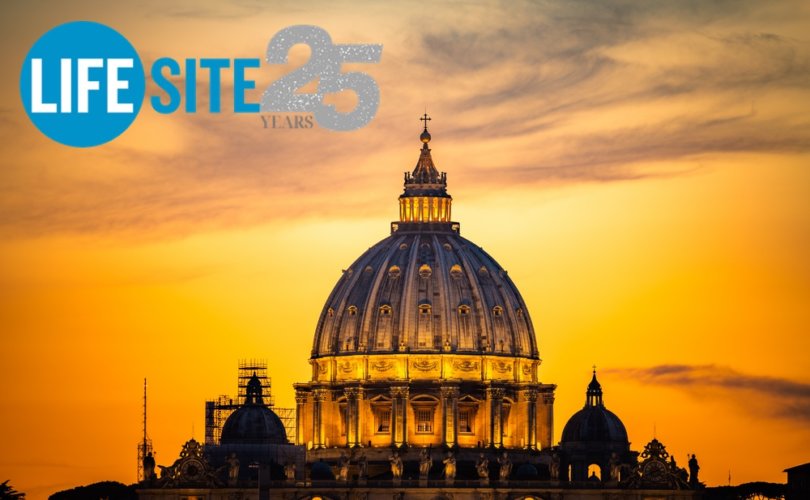 (LifeSiteNews) – The landscape of internal Catholic Church politics has changed radically over the past decade. As LifeSiteNews celebrates 25 years of pro-life, pro-family reporting, we are reposting the following article. It originally appeared on LifeSite in 2011, two years before Pope Benedict XVI’s resignation, and is an example of how LifeSite’s reporting can positively impact the direction of the Catholic Church.

Whether Church leadership and the heads of Catholic institutions are strongly pro-life, pro-family, and orthodox in general affects the entire pro-life movement. Many non-Catholic pro-life and religious leaders take direction and inspiration from the Church’s leadership on bioethics issues, and the Church has historically been a bulwark against forces of evil.

Longtime LifeSite readers and Church observers will recognize some of the figures in the below story: Cardinal Robert Sarah, then the head of the Pontifical Council Cor Unum, has since served as Prefect for the Congregation for Divine Worship and the Discipline of the Sacraments – the Vatican’s liturgy office – until Pope Francis replaced him with left-wing Archbishop Arthur Roche in 2021. Meanwhile the influence of Cardinal Oscar Rodriguez Maradiaga has grown during the Francis pontificate, despite evidence that he covered up the sexual abuse and misconduct of his auxiliary bishop and diverted millions of dollars of Church money to fraudulent investment schemes that have since disappeared.

February 22, 2011 (LifeSiteNews.com) – The Vatican has refused to allow Caritas General Secretary Lesley-Anne Knight to submit her name for reelection to her position, citing the need to strengthen the organization’s “Catholic identity,” among other concerns.

Knight was refused the “nihil obstat” (“nothing obstructs”) declaration required for candidates to be eligible for the office, despite protests from organization leaders, including Caritas President Cardinal Oscar Rodriguez Maradiaga.

Caritas Internationalis is an umbrella organization that unites numerous Catholic aid organizations worldwide, including the Canadian Catholic Organization for Development and Peace (CCODP), supported by the bishops of Canada.

Cardinal Robert Sarah, head of the Pontifical Council Cor Unum, told Zenit that “after four years, the mandate of the present Secretary General, Lesley Anne Knight, will end. In this time, Knight has done much to make the confederation more agile and professional.”

“Now Caritas Internationalis is dealing with new internal challenges, including the revision of its statutes. These challenges also involve internal collaboration, the Catholic identity of the Confederation, cooperation with the Holy See, greater participation of the various continents, a proper understanding of the autonomy of each Caritas member of the confederation,” he added.

Changes in the Vatican’s approach to international aid appear to be part of the general reform project outlined in Pope Benedict’s recent encyclical letter Caritas in Veritate (Charity in Truth).

The encyclical insisted that human development and foreign aid cannot be separated from the demands of truth: “Only in charity, illumined by the light of reason and faith, is it possible to pursue development goals that possess a more humane and humanizing value,” Benedict writes, and observes that international aid organizations are sometimes involved with abortion, contraception, sterilization, and euthanasia.

“Some non-governmental Organizations work actively to spread abortion, at times promoting the practice of sterilization in poor countries, in some cases not even informing the women concerned,” he writes. “Moreover, there is reason to suspect that development aid is sometimes linked to specific health-care policies which de facto involve the imposition of strong birth control measures. Further grounds for concern are laws permitting euthanasia as well as pressure from lobby groups, nationally and internationally, in favor of its juridical recognition.”

The CCODP, a Caritas member organization, has come under fire from pro-life groups for supporting organizations that advocate the legalization of abortion, distribute contraceptives, and support homosexualist policies. Knight vigorously defended CCODP after such policies were exposed by LifeSiteNews in early 2009 in a letter sent to donors and obtained by LifeSite.

In addition, anonymous Vatican officials told LifeSiteNews last November in Rome that similar problems exist with Catholic international aid organizations sponsored by other national bishops’ conferences and that this was a disturbing and unacceptable trend. LifeSiteNews was told that these bishops’ conferences were not conducting proper oversight over their international development and aid organizations resulting in the funding of groups whose objectives are in serious conflict with Catholic teaching.