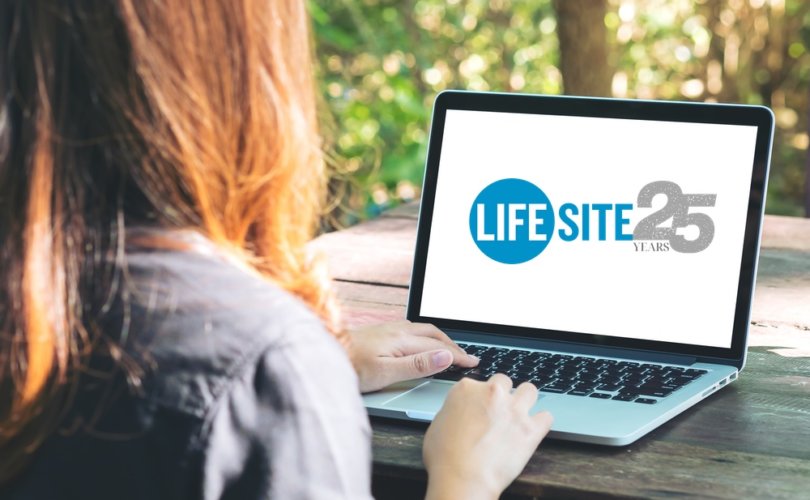 (LifeSiteNews) – At the end of 2019, LifeSiteNews hit a major milestone in our pro-life reporting: that year, we passed, for the first time, 100 million pageviews. No one could have possibly imagined the tyranny and horror that the new decade would bring – in fact, reading our announcement about passing this milestone is almost like a dispatch from a lost world.

Donald Trump was president; the U.S. economy was booming. “Myocarditis” was not a word with which most LifeSite readers, let alone the general public, had become familiar. Restrictions on freedom of movement in Western democracies were unthinkable. So were restrictions on the “right of the people to peaceably assemble.”

Seeing others’ faces was normal. Handshakes – with strangers, even! – were a part of day-to-day life.

Women could breathe normally, unmasked, as they gave birth. Families kept vigil by their dying loved ones’ hospital beds. In this bygone world, forcing someone to die alone, and denying their relatives the opportunity to say goodbye, was an unspeakable cruelty.

And yet, for all of the sanity and common sense that existed in 2019, there was plenty of evil and injustice, as evidenced by a glance at some of our most-read stories of that year. Big Tech censorship began to ramp up in 2019, though we hadn’t been permanently banned from Facebook and YouTube yet.

A great deal has changed since December 2019 and our big 100 million pageviews milestone, but LifeSite’s mission and mandate remain the same.

We will continue to bring hard-hitting pro-life reporting to as many people as possible, and provide balance and more accurate coverage on culture, life, and family matters than is usually given by other media.

We will continue to report the truth about COVID tyranny – from the incompetent blunderings of local bureaucrats to the stunning hubris of unelected health officials to the machinations of global elites – and its profound impact on bioethics, family, and freedom. We will do all of this joyfully, though, grateful that LifeSite’s reporting reaches so many hundreds of millions of people and equips them with the truth our world desperately needs.

December 19, 2019 (LifeSiteNews) — LifeSiteNews is proud to announce that we have just surpassed 100 million pageviews for 2019! We have far surpassed our previous annual pageviews record of 65.9 million, set last year, with traffic growth of over 50%.

This is a huge milestone, and a testament to our rapidly increasing ability to get out news on the most important issues facing our culture today.

Because of the support of the LifeSite giving family, we are now averaging 283,000 pageviews each and every day! Last year, we averaged 180,000 pageviews per day.

This is no small feat, especially considering that Facebook and Twitter have ramped up their efforts to censor us in the last several years. Just this month, Twitter locked our account for sharing a story about a man who think’s he’s a woman.

LifeSite’s growth is thanks to one thing: its supporters.

And now, we have surpassed the 100 million mark! That’s 34.1 million more pageviews than last year. Wow!

Part of the reason we are reaching a larger audience is because people are waking up to the lies of the establishment media. People from across the world want the truth, unvarnished and without bias about the latest pro-life, pro-family stories.

Another reason is because we have branched out into new projects.

LifeSite reporters have ramped up their efforts and have gone on the ground in Rome, Texas, Michigan, Poland and elsewhere. The stunning photographs and videos they capture have helped us reach hundreds of thousands of new viewers on YouTube and Instagram.

These shows have garnered millions of listens and thousands of followers, putting our real impact far above the 100 million mark.

If you haven’t already, be sure to sign up to receive email updates when each new show is released. Click here for The John-Henry Westen Show, click here for the Jonathon van Maren Show, and click here for Mother Miriam Live.

Here are just a few of the most read LifeSite stories from 2019 that put us over 100 million pageviews.

From all of us at LifeSiteNews, we want to sincerely thank all of our dedicated supporters for their incredible generosity in helping us reach such an enormous accomplishment. The war against life, family, and faith is raging on around us in our culture and we couldn’t accomplish our mission to restore the culture through news media without them.

If you would like to join the LifeSite giving family to support the growing needs of our mission through making an impactful gift today, click here.

Help ensure the stories that simply cannot be found anywhere else reach even more people in 2020!

With increased censorship from big tech companies and social media giants in addition to the heightened attacks on freedom of the press, we need all of our readers to consider supporting our mission with a donation today. We need your support to sustain this amazing growth in our reach if we are going to really make a difference for truth in 2020!