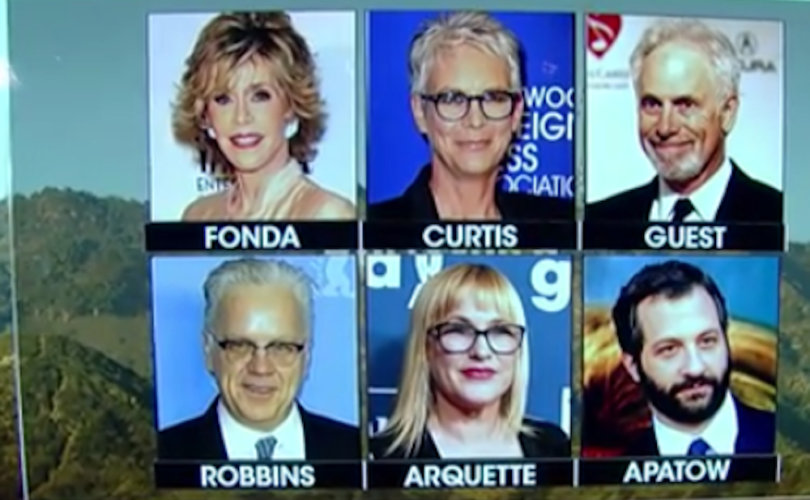 WASHINGTON, D.C., January 10, 2017 (LifeSiteNews) – As Planned Parenthood’s millions in taxpayer-funded subsidies hang in the balance with the new Congress and incoming Trump administration, celebrity friends of the nation’s biggest abortion business are planning a televised social media event on inauguration day to solicit money for the abortion giant’s coffers.

As the Trump administration is sworn in January 20, celebrities Jane Fonda, Jamie Lee Curtis, Tim Robbins and others will appear on a Facebook Live telethon to raise funds for Planned Parenthood.

The “Love-a-thon” is a Jerry Lewis-style telethon for the digital age, according to CNN.

It will be hosted from New York City beginning at 12:30 p.m. ET. The three-hour event will include comedic and musical acts from across the U.S. and celebrity emcees.

The aim is to raise at least $50,000 for the abortion behemoth and two other liberal groups, the American Civil Liberties Union of Southern California and Earthjustice.

Planned Parenthood has been in panic mode before and after Donald Trump’s historic surprise election victory over Hillary Clinton in November. The abortion provider has stepped up fundraising efforts and hyped the supposed danger that defunding would mean for birth control and abortion access, and taken concerted steps to join with other anti-Trump forces while rallying allies.

“We are bigger and stronger and more powerful and more committed than you know,” Planned Parenthood Federation President Cecile Richards told supporters the week after the election in a marketing email. “We won't shrink or hide away. We're standing strong — ready to fight. For our lives. For our health. For our rights.”

The “Love-a-thon” idea generated from 23-year-old entrepreneur Alex Godin’s personal election reaction. “I woke up like a lot of Americans feeling pretty crappy on November 10,” Godin said. “I looked for an opportunity to do something.”

Godin, who co-founded the email-based collaboration platform Dispatch and later sold it to Meetup.com in 2013, gathered other tech individuals to arrange the telethon.

Silverman said the telethon was a first for fundraising in this fashion. “Lots of people use Facebook and Facebook Live to raise money, but [the concept of] taking a telethon and applying it to Facebook Live is new.”

Aside from the novelty of the fundraising event, Godin noted the significance in backing these groups, adding, “It's a really important opportunity to support causes like Planned Parenthood, the ACLU, Earthjustice, as they gear up to do [critical] work.”