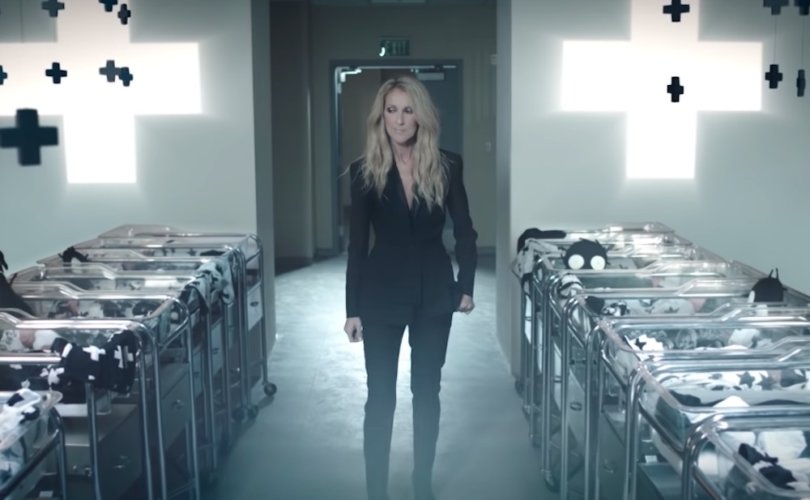 “Our children. They are not really our children, as we are all just links in a never-ending chain that is life,” the Canadian singer narrates in an ad released this week. “For us, they are everything. But in reality, we are only a fraction of their universe.”

The spot follows her breaking into a hospital and making her way to the maternity ward, where male and female newborns are evenly divided into blue and pink sides of the room.

“We miss the past; they dream of tomorrow,” Dion continues. “We may thrust them forward into the future, but the course will always be theirs to choose.” She then blows black and silver sparkles around the room, erasing the colors on the walls and transforming the babies’ color-coded attire into new black-and-white garb.

The ad then takes a comedic turn, as she’s discovered by security guards and arrested for trespassing, her celebrity status failing to save her from a night in jail.

The spot is advertising a new clothing line by Dion and Nununu, a kids’ clothing designer dedicated to “introducing children to the wonderful mystery of minimalism” and “let[ting] kids shine at every stage with a kickass cocktail of attitude and a big sense of humor.”

“I’ve always loved nununu and what they represent. Partnering with them to encourage a dialogue of equality and possibility makes so much sense,” Dion said of the partnership.

A “Celinununu” website erected specifically for the new line shows offerings in combinations of black, white, gray, and yellow. Most of the designs simply display basic shapes, individual letters, or the alphabet, though skulls and the phrase “New Order” are also recurring motifs.

The website also makes clear the project’s ideological mission to offer a “platform for a new humanistic education.” The product line “liberates children from the traditional roles of boy/girl, and enables younger people to grow on values of equality with the freedom to strengthen their own power of personality based on mutual respect,” the website claims.

Dion has apparently received some pushback against the ad already, which she sought to calm in a CNN interview. “The message I'm trying to get across is you raise your children the way you want to raise your children,” she said. “You have to decide what's right for them. We're just proposing another way to take away the stereotype.”

While the clothes themselves appear largely innocuous, and children’s color preferences alone are hardly an indicator of gender confusion, Celinununu’s promotional rhetoric echoes that of various projects in recent years to deny natural differences between boys and girls at early ages.

This summer, the BBC promoted a segment with the hashtag #NoMoreBoysAndGirls in which adult caretakers were given a baby dressed and presented as the opposite sex to play with. The segment purported to demonstrate that children are harmed when adults assume children want to play with traditionally gender-specific toys. Contrary to the BBC’s narrative, studies suggest a biological basis for children’s playtime preferences.

Despite “gender fluidity” proponents’ claims to be advancing children’s welfare, indicates that reinforcing a gender-confused child’s “identity” is at best unnecessary and at worst destructive, because it reinforces a phenomenon most kids would otherwise outgrow. This in turn can distract from diagnosing and treating the actual causes of transgender individuals’ heightened tendency to engage in self-harm and suicide.