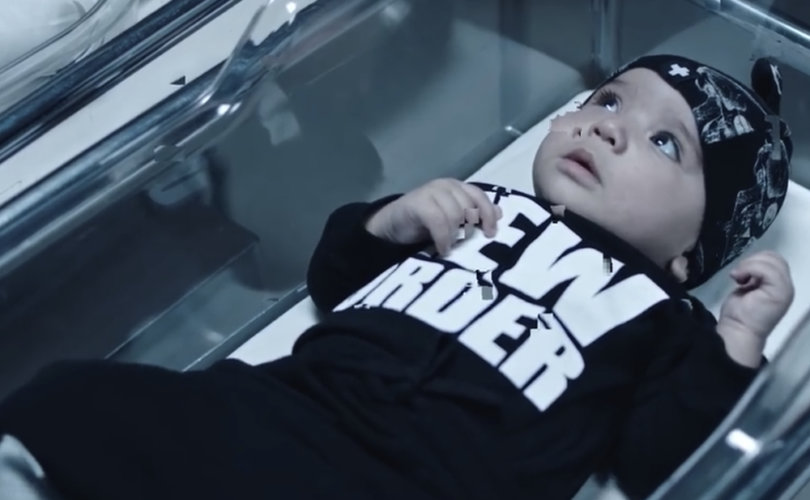 November 28, 2018 (LifeSiteNews) – As swiftly as the advertising campaign for Celine Dion’s new “gender neutral” children’s clothing line launched, judgment –– which sees intrinsic evil being inflicted upon these innocent babes – has crashed upon the ill-advised effort.

The commercial, intended to be humorous, is dark. Dion, in what appears to be an act of sorcery, blows a handful of black dust in a hospital nursery filled with babies dressed in pastel pink or blue. Suddenly, black crosses hang in the air over the children as they find themselves clothed in drab black and white onesies covered in stars and messages in big letters declaring “NEW ORDER.” Images of skulls encircle the infants’ heads.

“I’m convinced that the way this gender thing has spread is demonic,” Msgr. John Esseff  told the National Catholic Register. “It’s false. I don’t even know how many genders there’s supposed to be now, but there are only two that God made.”

Msgr. Esseff, formerly a spiritual director to St. Teresa of Calcutta, has been a priest for 65 years and an exorcist in the Diocese of Scranton, Pennsylvania, for more than 40 years.

“The devil is going after children by confusing gender,” he continued. “When a child is born, what is the first things we say about that child? It’s a boy, or it’s a girl. That is the most natural thing in the world to say. But to say that there is no difference is satanic.”

“People behind this are influencing children to disorder,” he said. “This is definitely satanic.”

“The devil is a liar and there are huge lies being told,” added Esseff. “This is being done for money, and there is divisiveness that comes from this — marks of the devil.”

Dion worked with children’s clothing manufacturer Nununu in this effort. The new partnership calls itself “Celinununu.”

Dion and Celinununu clearly state that they want to use their clothing line to mold children’s thinking to create and adapt to a genderless world. Others might see this as a effort to brainwash young minds to accept a terrible ideology.

“CELINUNUNU liberates children from the traditional roles of boy/girl,” declares the joint venture’s new website. “We believe that an educational experience is possible through children’s clothes, because fashion builds concepts deep within our minds and changes thought patterns.”

Vatican exorcist: The devil wants to confuse children about gender

Demonic disturbances that torment individuals, called diabolical obsession, “can lead to confusion about one’s gender,” “particularly in the young,” wrote Father Gabriele Amorth, who served as the chief exorcist of Rome and founded the International Association of Exorcists. Amorth performed tens of thousands of exorcisms throughout his career.

In his book, An Exorcist Explains the Demonic: The Antics of Satan and His Army of Fallen Angels, Amorth wrote that disordered ideas about gender, especially in children, can be a sign of torment from the devil.

Amorth warned that many of the devil’s “ordinary” temptations are passed off as “modern ideas” but really serve to “unhinge the principles of the faith.”

The Dion/Nununu partnership — Celinununu — through materialism and truly odd virtue signaling, seems hellbent on seducing parents to confuse their children about gender from birth.

Interestingly, Dion’s Celinununu ad perhaps betrays dark motives. The world of the children in the video is robbed of vivid color, and they instead are swathed in dull blacks and whites.

The same thing is evident at the Celinununu’s website: The media page displays unhappy children in austere surroundings wearing drab Celinununu clothing, almost admitting children’s lives will be drained of their natural humanity and happiness as boys and girl if parents succumb to the corporation’s messaging.