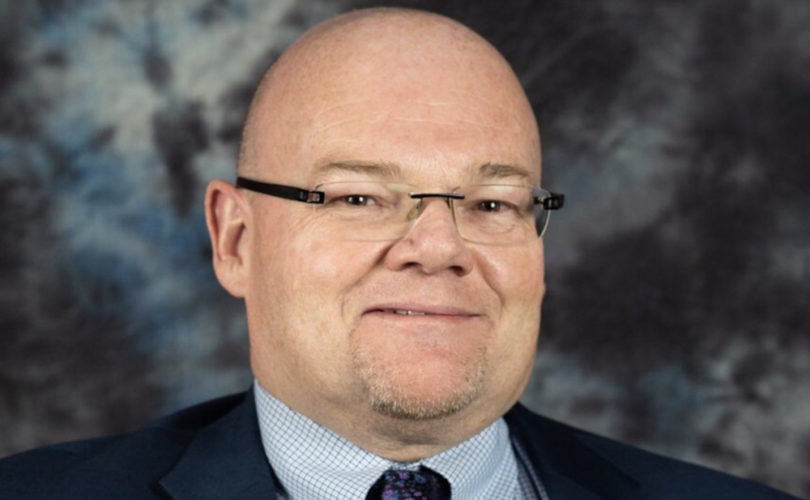 BURLINGTON, Ontario, April 23, 2021 (LifeSiteNews) — The Chair of the Trustees for a Catholic school board has called an illegal meeting to force a decision on demands for LGBT symbols and ideology in the district’s schools.

Patrick Murphy, the Chair of the Halton District Catholic School Board, has called the “emergency meeting” for Monday, April 26, bypassing the usual procedures and violating the bylaws for such meetings.

On Tuesday, the Trustees considered a proposal to show allegiance to the LGBT movement in the Halton District’s Catholic schools, both by flying the rainbow “Pride” flag outside the schools in June and by posting pro-LGBT signs inside classrooms. There were many delegates in the online meeting, representing both the pro-LGBT view and the faithfully Catholic view. At 10 p.m., the Chair asked the Trustees if the meeting could continue overtime. According to the bylaws, a two-thirds majority is needed to continue a meeting after 10 p.m. If the meeting does not continue, unfinished business is dealt with at the next scheduled meeting.

Murphy did not get the two-thirds majority, and so the question of the place of LGBT activism in Catholic schools was deferred until Tuesday, May 4, 7:30 p.m. This gave the public two weeks in which to apply to become delegates and prepare their opinions.

However, last night the Chair summoned Trustees to an “emergency meeting” on Monday, April 26, which will be solely about the LGBT question, and will therefore merely be an “overtime” continuation of this Tuesday’s meeting. Thus, Murphy has violated both the bylaws governing meetings and ignored the Trustees’ vote.

In addition, Murphy has indicated that no delegates will be permitted to speak at Monday’s illegal meeting, and thus the public will be cut out of a decision that will have both a deeply symbolic and irrevocable effect on the region’s Catholic schools.

The applicable bylaws for special meetings of the Halton District Catholic School Board are as follows:

Any unfinished business will resume under Item 14 of the Regular Meeting of the Board Agenda.

Meetings of the Board shall adjourn not later than 10:00 p.m., unless two/thirds (2/3) of the members present and voting agree to an extension of time. In any event, the Board shall not conduct its business beyond 10:30 p.m. without the unanimous consent of members’ present, save for the item on the table. Unanimous consent is required every half hour thereafter.

Murphy is believed to want the LGBT proposals to go through, in part because of an April 19, 2021, memo he sent to Ontario Minister of Education Stephen Lecce, regarding “Inclusive Racial and Cultural Curriculum.”

In this letter, Murphy said he was writing on behalf of the Halton District Catholic School Board to “request a review and revision of the Ontario curriculum to ensure diverse perspectives and experiences are better reflected in our classrooms.”

Citing a Catholic commitment “to creating safe, inclusive, and welcoming learning environments that support student achievement and well-being in our schools” and the Ministry’s own “Ontario Equity Action Plan”, Murphy asked for an ideology-based overhaul of the province’s school curriculum.

“[W]e are writing to formally request a review and revision of the Ontario curriculum to better incorporate the culture and history of racialized and marginalized students and staff, including: women, people with disabilities, Black and Indigenous People, People of Colour, and 2SLGBTQ+ individuals,” he wrote.

A trusted source told LifeSiteNews that Murphy may propose alternative measures to help the LGBT movement gain access to his schools in exchange for dropping the flag proposal. The flag, the source suggested, is only a cover for the real agenda: creating “safe spaces” in Catholic schools so that Catholic doctrine about sexuality, marriage and the family cannot be taught there. During Tuesday’s meeting, pro-LGBT delegates indicated that hoisting the Pride flag was only “the beginning.”

In addition to being the Chair of the HDCSB, Patrick Murphy is a “past-Grand Knight” of the Holy Rosary Knights of Columbus (Council #6777) in Milton, Ontario.

LifeSiteNews has reached out to the Chair, but is still waiting for a response.

To make your opinions respectfully known to the Trustees of the Halton District Catholic School Board, please contact: