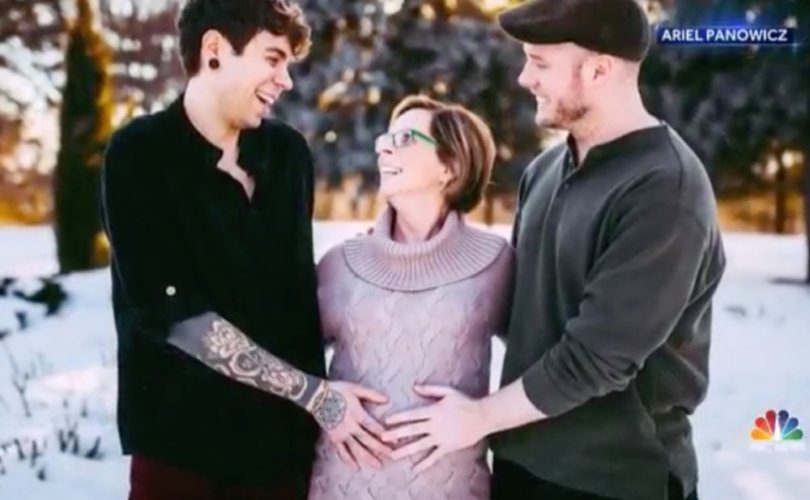 Cecile Eledge, 61, served as a surrogate mother for her homosexual son and sperm donor Matthew Eledge, 32. Eledge is in a homosexual relationship with Elliot Dougherty, 29. Baby Uma Louise Dougherty-Eledge was born without surgical intervention on March 25, 2019.

Dougherty’s married sister Lea Yribe, then 25, donated 24 eggs, one of which was used in Uma’s creation.

Hitherto Cecile Eledge was accounted the mother of three children, including Matthew. However, thanks to Nebraska’s laws around IVF and surrogacy, she, not Yribe, is legally Una’s mother and her son Matthew, as sperm donor, is legally Una’s father.

“Let’s just say we will not be framing and hanging up Uma’s birth certificate,” Matthew Eledge told a reporter.

Dougherty will have to go through an adoption process before he obtains parental custody of the child.

According to BuzzFeed News, Dougherty and Eledge spent $40,000 on the In Vitro Fertilization procedure, a project that lasted two years before it resulted in Uma’s birth. Of the 24 eggs Yribe donated, eleven were “injected with Matthew’s sperm.”  The result was seven embryos. After genetic testing, four of the embryos were killed. Of the remaining three, one was successfully implanted in Cecile Eledge and two were put into storage.

Matthew Eledge voiced some discomfort at the power he had over choosing which embryos could live and which could die–just for being the wrong sex, for example.

“I’m not a super religious person, but you do feel like you’re playing God. Like, am I choosing too much?” he remarked to BuzzFeed’s LGBT reporter Shannon Keating.

Eledge said he’d always “dreamed of having a girl” but in the end asked the doctors to choose the “healthiest” looking embryos. These were all female.

The young father now feels concerned for the two embryos “on ice.”  According to the BuzzFeed article:

“It’s this weird thing,” Matthew said. “They’re just this bundle of cells, right? But now I’m like, ‘How can you discard those?’” They spent so much money and effort creating the embryos, and transferring them in the future would be much cheaper, since they wouldn’t have to pay for the egg retrieval process all over again. For now, Matthew and Elliot are keeping their options open.

Before his same-sex “marriage,” Eledge was a teacher at a private Catholic high school. Fired after informing the school of his plans to “marry” Dougherty, he now teaches at a public school.

“There are two kinds of people in the world: those who are instinctively horrified by this, and those who think it is a glorious thing what money, technology and a willingness to break taboos can bring about,” he wrote.

Dreher observed that Uma’s conception, though brought about without sexual union between two people, involved multiple forms of incest.

“The taboo against incest is ancient, and nearly universal,” he wrote. “These people violated it multiple times, using technology — and no sex was involved. They mixed the egg of Dougherty’s sister with his husband’s sperm. In custom — 'custom,' ha ha! — Dougherty’s sister is also considered to be the sister of his spouse, Eledge,” Dreher continued.

“Plus, the egg fertilized by Eledge and his sister-in-law was implanted into his mother, so that Eledge’s mother could bear his child. Now this has happened, and the response of the world — our world — is to celebrate it as a triumph of love.”

Dreher believes that the eradication of the incest taboo, and the emptying out of meaning from such basic civilizational concepts as “mother,” “father,” and “family” will lead to civilizational amnesia and bring “catastrophic” suffering on the human race.

“We have forgotten, we are forgetting, and our forgetting will be complete in another generation or two,” he wrote.

“We are creating chaos, and calling it civilization. When the money runs out, or the technology fails, we will live with the consequences of our hubris.”

'A child is not a Christmas present'

Fiorella Nash, author of The Abolition of Woman, has written extensively of the damage the IVF industry has done to women’s health. Nevertheless, she indicated to LifeSiteNews via social media that her first concern in this case was for baby Uma.

“Don't any of the adults in this situation consider how messed up the child is going to be?” she asked.

“A child is not a Christmas present,” she said. “There are ways to express love to a son than to pillage your body and create and destroy early life.”

“It is commendable that a mother should want to make sacrifices for her son – all loving mothers do – but that is not what this is all about,” Nash continued.

She pointed out that there have been situations in which surrogacy and egg-donorship have resulted in a helpless child having no parents at all. In the Baby Manji case, a Mr and Mrs Yamada commissioned a baby using Mr Yamanda’s sperm and a donor egg. The embryo was implanted in an Indian surrogate. The Yamadas divorced, and Mrs Yamada lost interest in the baby. The donor and surrogate had signed away their rights, and as a single man Mr Yamada was forbidden by Iaw to adopt a child born in India. This meant that although Manji had four parents, she was left with none.

“How can we talk about a right to know one's birth parents if we can't define who they actually are?” she asked.