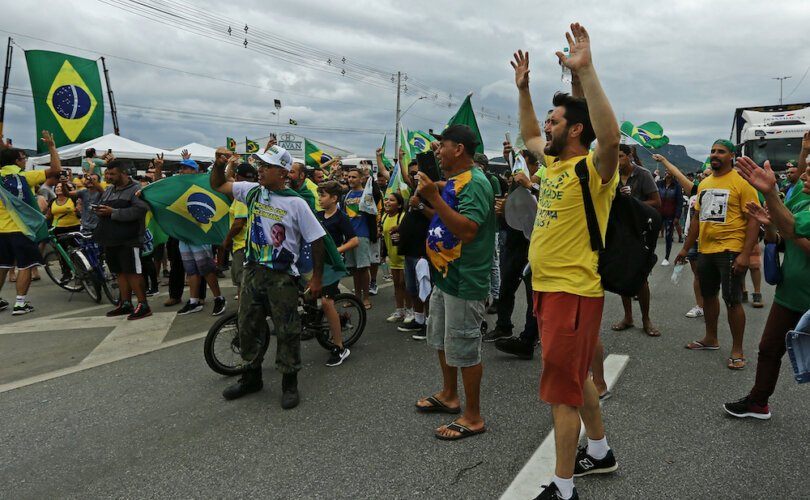 (LifeSiteNews) – After the declared electoral defeat of conservative-populist incumbent President Jair Bolsonaro of Brazil, which some commentators are calling fraudulent, a nationwide movement in support of Bolsonaro has erupted, with road blockades popping up all over the country and police joining the movement.

HAPPENING NOW: Things are developing quickly in Brazil, and not in a good way after the election that was STOLEN from Bolsonaro.

The police are starting to join with the Bolsonarista truck drivers who are protesting the fraudulent results of the Brazilian election. pic.twitter.com/FFWV7EOuDu

LifeSiteNews’s John-Henry Westen discussed this week with Bernardo Kuster, one of Brazil’s most influential journalists, the situation unfolding on the ground in Brazil and the reasons for such popular support for Bolsonaro. Click the video below to watch:

Bolsonaro has not conceded defeat to the socialist former president Luiz Inácio Lula da Silva, who spent 18 months in prison for corruption-related offenses. Silva’s tarnished criminal past and Bolsonaro’s party’s massive gains at all levels besides the presidency have cast doubt on the run-off election results according to some.

Journalist Matthew Tyrman told Steve Bannon on Monday that Bolsonaro’s party had significantly increased its presence in the Brazilian Congress, gaining 22 seats in the House of Deputies. “That’s just his party,” Tyrman said. “In the right-wing government coalition group,” which supports Bolsonaro, there were also significant gains, to the point that Tyrman said it “will dominate in both the lower house and the upper house.”

Support for Bolsonaro is continuing to grow in the days since the election, with roads between major cities being blocked in protest of what many believe to be an illegitimate result.

In São Paulo, national police have seemingly joined the protestors and have helped them gain deeper access to the São Paulo International Airport in order to continue with their demonstrations.

BREAKING: National Road Police has joined with the protesters blocking the São Paulo International Airport and has assisted them in cutting through the fencing of the airport. pic.twitter.com/sNvrms52JK

Conservative Brazilian radio host Kennedy Linhares posted a video on his Instagram account which shows a police officer speaking to a crowd with the caption: “Police officers are demonstrating all over the country, they don’t want to receive orders from a convicted criminal! Congratulations to the good Brazilians who are in the streets for the love of the country!”

In some locations, construction vehicles and farming machinery are being used to block major roadways that connect regions of the country, with the help of national policing services.

ON THE GROUND: Pro-Bolsonaro protesters are using construction trucks to haul dirt and sand to block roads. pic.twitter.com/EZzSvHm0tp

BREAKING: From a road block in Acre, deep in the Amazonic region near border with Bolivia and Peru.

According to this protester, the National Force (Federal Swat Team) in Acre met with protesters, helped them set a roadblock, and are now leaving the state and going to Brasília. pic.twitter.com/2CfLfOTpWV

The Federal Highway Police (PRF) said that truckers were blocking highways at 271 points, partially or fully, CBC News reported. The Supreme Court of Brazil has ordered police to remove the blockades which exist in 23 of the 26 national regions.

Help Brazilian pro-life hero raise his 46 adopted, disabled children
Tonio de Mello needs our help to care for his 46 disabled children, many of whom would have been aborted had he not offered to adopt them.