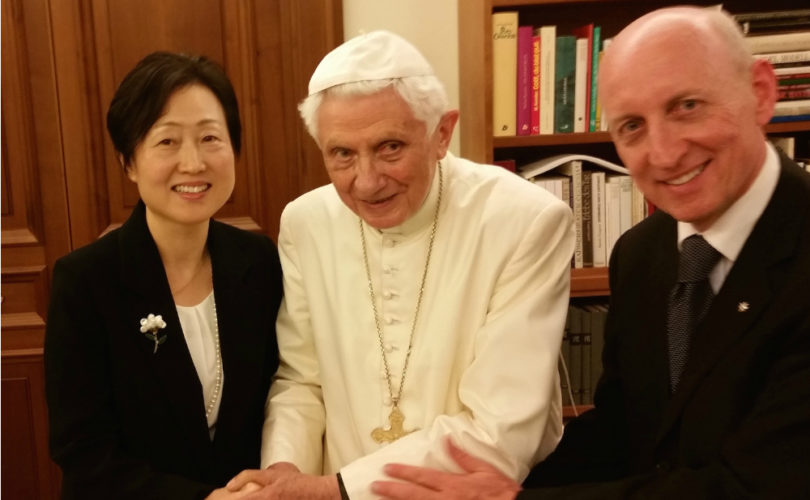 Caritas in Veritate International is starting small but it has some powerful backing. The leaders of this federation of groups that combine charity with evangelization met with Pope Emeritus Benedict XVI during their leaders conference in Rome and found strong support.

But when they thanked him for his encyclicals, especially Caritas in Veritate (which means “Love in Truth”), for inspiring their formation in 2010, Benedict responded, “The Holy Spirit is the author of this initiative, not I.”

So reports Henry Cappello, the president of CiVI, who told LifeSiteNews on Wednesday that the pope emeritus was healthy and able to visit with them for 25 minutes. Benedict also summed up neatly the point of his encyclicals and of CiVI: “He told us, ‘Faith without charity is useless. And charity without faith is useless.’”

Cappello also credited Pope Francis for inspiring the conference, which brought to Rome 120 leaders from Catholic NGOs, charities, and mission groups in 23 nations, some of them affiliated with CiVI and some not.

Cappello said the conference’s theme was Pope Francis’ emphasis on a “theology of encounter,” first presented in his apostlic exhortation Evangelii Gaudium. Explained Cappello, “The Church is not an NGO. Its primary mission is to spread the Gospel to the ends of the earth. But charities bringing disaster aid to people are in an excellent position to bring people into a personal encounter with Jesus, and it may be their only opportunity to do that in their lives. So our charity workers go into disaster areas, into developing countries, and give what help is needed, food, medicine, water. And so they build trust so that people are then ready to hear the truth of the Gospel.”

But some Catholic and Christian charities condemn the blending of material aid and evangelization, claiming that this creates “rice Christians,” who only convert in order to get food.

Counters Cappello: “We are not making the charitable acts conditional on their listening to the Gospel. We are being pragmatic.” He explained that the truth of Jesus is as much a necessity to people hit by disaster as is material aid. “I have been to many disaster areas in the past 10 years around the world. I have sat down with men and women who have lost all their children and their spouses too. Giving them food or housing won’t heal their emotional wounds. They need spiritual healing.”

Cappello goes further: some disaster-hit nations get billions of dollars worth of aid but make no progress towards recovery. “It is because their spiritual wounds are not being taken care of.”

So CiVI missionaries not only bring medicine, food and other material goods, they try to bring people into a personal encounter with Jesus.

And not just the disaster-hit population are affected, he says, so are aid workers from other organizations. That is how CiVI addresses the fact that some Catholic aid organizations proudly eschew evangelization: not by preaching or arguing with the leaders of those organizations, but by evangelizing with the people of developing countries and the other aid workers there. “At the grassroots all these agencies are working together. We do our charism in the light where others see. They come to our meetings. Our missionaries try to receive the Eucharist every day. Other aid workers come too.”

CiVI has 21 member organizations working in 84 countries, the biggest being Youth Arise International, which Cappello also heads. YAI works with the leaders of 45 youth evangelization groups around the world. CiVI’s biggest project is a 100-home complex in Haiti that will include a sports centre, a residence for abused women, a chapel, and a college preparatory school.

Cappello says CiVI encourages evangelists to do charity work and charity workers to do evangelism. When evangelists get involved in disaster relief, for example, they act out Pope Francis’ theology of encounter. As Cappello explained earlier to Zenit News, “The Holy Father is reminding us that as we reach out to the ‘periphery’, to the poorest of the poor, to the needy and the marginalized, and as we touch the wounds of the poor, we meet Jesus, we see and touch his brokenness, we understand more the cross, that leads to our conversion.”

Vatican cardinal: Catholic charity ‘is not only giving food … but giving God’