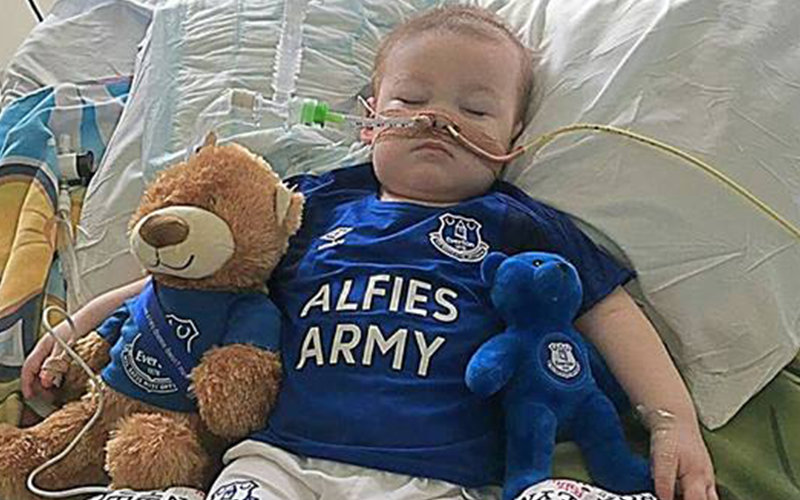 LIVERPOOL, England, August 1, 2017 (LifeSiteNews) – A Liverpool hospital wants to yank the life support of a 14-month-old baby, but his parents want to bring him to the United States for treatment.

Tom Evans and Kate James are the parents of Alfie Evans, who has been in intensive care at Alder Hey Children’s Hospital since December. Alfie has a mysterious, undiagnosed disease. He's in a coma and has seizures.

The case is reminiscent of Charlie Gard's, which garnered international attention. Charlie's parents fought Great Ormond Street Hospital for months to be able to transfer him to the U.S. for experimental treatment. The hospital wanted to remove his life support.

Charlie was removed from his ventilator at a hospice on Friday, July 28, after his parents ultimately ended their legal battle.

A video of Alfie shared on the Facebook group “Alfie's Army” shows him opening his eyes and sucking on a pacifier. Another video shows him stretching.

“Doctors have warned they may have to take legal action as Tom will not let let them switch off Alfie’s life support,” reported The Mirror.

Tom says more than a dozen U.S. hospitals have offered to help, including one in Miami.

More than 12,000 people have signed a change.org petition asking Alder Hey to keep Alfie on life support as his parents speak with specialists who “could help diagnose Alfie and give him the appropriate care.”

“The first discussion that the Hospital had with Alfie's parents suggesting to turn the life support off, was on New Year's Eve 2016,” the petition says. “Doctors said that Alfie may only have hours to live and therefore, his mother and father baptised him. Alfie's heart rate was slowing down and from head to toe, he was cold. Miraculously, Alfie pulled through this!”

Alfie's parents should be the ones who are “able to choose when it would be appropriate to withdraw life support, if it is necessary,” the petition says.

“Alfie’s case is a very disturbing development, especially after what happened with Charlie Gard, and re-emphasizes the danger of an autocratic system where life-or-death decisions are made by the state and doctors in a nationally-run healthcare system, rather than by loving parents,” Dr. David Prentice, vice president of research at the Charlotte Lozier Institute, told LifeSiteNews.

Tom and Kate have raised more than £7,000 for Alfie's treatment.

The hospital “told us to get lawyers” given the dispute over whether Alfie's life support should be pulled, they wrote on their fundraising page.

“Alfie’s case is in a sense more disturbing than Charlie’s, because there is no diagnosis … yet for little Alfie,” Prentice continued. “Yet some doctors have already discussed Alfie’s case as one of 'futile care' and proposed removing his life support, which would end his life. His support is futile in the doctors’ minds precisely because it is sustaining his life.”

Alfie's dad told UK media that they closely followed Charlie's case and were heartbroken when he died.

“When I heard about Charlie, I just held Alfie as tight as I could, cuddled him, and cried my eyes out,” he told The Mirror.

“It is unimaginable that any doctor, supposedly dedicated to preserving life and health, would decide to end a life simply because they cannot diagnose and treat a patient,” concluded Prentice.

The website Action 4 Alfie contains links through which people can donate.