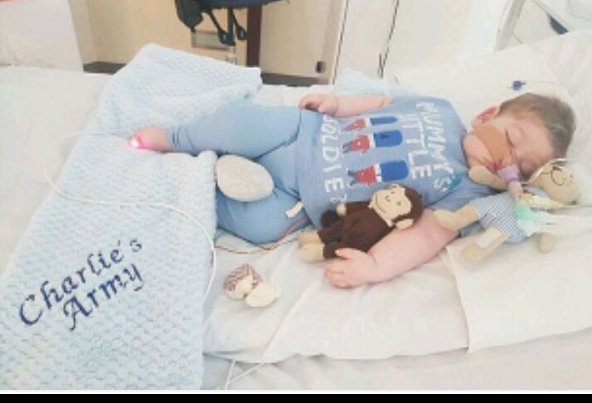 LONDON, England, August 7, 2017 (LifeSiteNews) – It took 12 minutes for Charlie Gard to die after his ventilator was removed, his parents said in a new interview, and he “opened his eyes and looked at us one last time and closed them before he passed away.”

A lengthy legal battle ensued. Charlie's parents eventually withdrew their request to have him transferred because months of delays greatly worsened Charlie's chances of survival. GOSH denied them their final wish of bringing him home to die. He was transferred to a hospice and had his ventilator removed on July 28.

In an interview with the Daily Mail, Chris and Connie detailed Charlie's last moments with them.

“We took Charlie out for a walk in a pushchair in the hospice park,” said Chris. “We had little plaster of Paris molds taken of his feet and hands with ours.”

“We dressed him in a Babygro with stars on it. He looked so beautiful and innocent,” said Connie. “The hospice staff popped in. Those last five hours had flashed by. A woman said the moment we dreaded would happen in the next five minutes. Chris and I were both crying. We laid on the bed with Charlie between us, each of us holding a hand. We were both telling him we were there, we loved him, how proud we were of him.”

Then a hospice worker unplugged Charlie's ventilator. The tube, not working, remained in his nose.

“Charlie opened his eyes and looked at us one last time and closed them before he passed away,” said Connie. “We were warned it might take five or six minutes for him to die. But it took 12 minutes until his heart stopped beating.”

Chris said it was “typical of our little fighter, our warrior, to keep fighting until the very end.”

“Through sobs, Chris and I marveled at how beautiful our son was,” said Connie.

The hospice then gave them the option of taking Charlie home in a “temperature assisted cuddle cot.”

Connie admitted she initially thought it “would be rather odd” to do this. “But ultimately, it felt perfectly natural to leave the hospice with Charlie and take him with us. Charlie was still warm as we carried him through our front door. The moment was very emotional. We had got our last wish to bring him home, but Charlie was no longer alive.”

The Daily Mail continued: “The last time they’d seen their flat was in October last year when he became ill and Connie had rushed him to the hospital. Once their son was transferred to GOSH, they never went home. Relatives picked up clothes and they stayed in special accommodation close to the hospital. … While relatives had tidied up hastily abandoned coffee cups, everything else in their flat remained as it had been since last October.”

He and Connie wept upon seeing “the 'Congratulations On Your Baby Boy' cards still lining the front room,” said Chris.

Details about Charlie's funeral haven't been released yet. Chris and Connie plan to use the $1.5 million they raised to start The Charlie Gard Foundation. It will help families in similar circumstances.