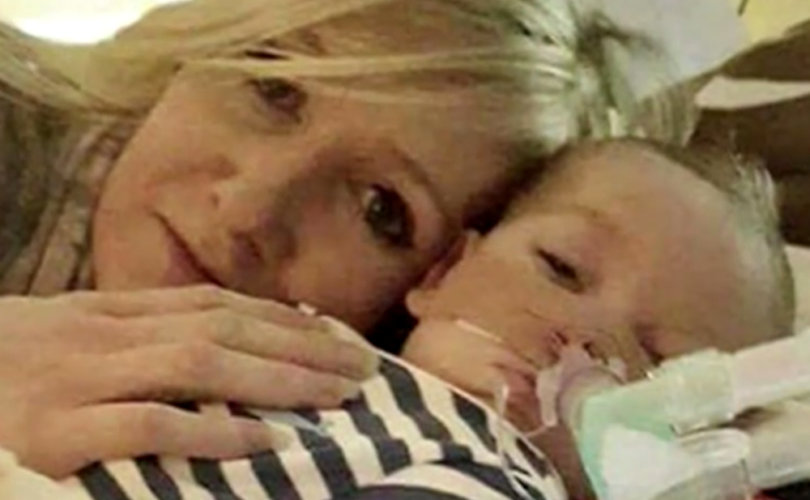 LONDON, July 24, 2017 (LifeSiteNews) – Baby Charlie Gard’s parents made a heartbreaking statement in court today as they announced they were ending their legal fight to give their 11-month-old a chance at life.

“Had Charlie been given the treatment sooner he would have had the potential to be a normal, healthy little boy,” said the statement from Chris Gard and Connie Yates, read by Connie in court this morning.

They insisted, based on consultation with U.S. expert Dr. Michio Hirano, that Charlie had normal brain function in January and could have largely recovered. But, they say, the hospital wasted precious months fighting them in court while Charlie’s muscles deteriorated to the point that treatment was no longer possible.

“There is one simple reason for Charlie's muscles deteriorating to the extent they are in now – TIME. A whole lot of wasted time,” they said.

The last 11 nearly 12 months have been the best, the worst and ultimately life changing months of our lives but Charlie is Charlie and we wouldn't change him for the world. All our efforts have been for him.

Put simply, this is about a sweet, gorgeous, innocent little boy who was born with a rare disease, who had a real, genuine chance at life and a family who love him so very dearly and that's why we fought so hard for him.

We are truly devastated to say that following the most recent MRI scan of Charlie's muscles, as requested in the recent MDT meeting by Dr Hirano; as Charlie's devoted and loving parents we have decided that it's no longer in Charlie's best interests to pursue treatment and we will let our son go and be with the angels.

The American and Italian team were still willing to treat Charlie after seeing both his recent brain MRI and EEG performed last week. He's not brain dead (and never has been). He still responds to us, even now, but after reviewing the recent muscle MRI it was considered that Charlie's muscles have deteriorated to the extent that it is largely irreversible and, were treatment to work, his quality of life would now not be one which we would want for our precious little boy. They both agreed that treatment should have been started sooner.

There is one simple reason for Charlie's muscles deteriorating to the extent they are in now – TIME. A whole lot of wasted time. Had Charlie been given the treatment sooner he would have had the potential to be a normal, healthy little boy.

His muscles were in pretty good shape in January, although obviously weaker than a child of similar age, and his brain scan was that of a relatively normal child of his age. He may well have had some disabilities later on in life but his quality of life could have been improved greatly.

The reason that treatment was not commenced in January or April this year was that Charlie was found to have 'irreversible brain damage' and treatment was considered as 'futile'. Dr Hirano and Dr Bertini, together with other internationally renowned paediatric neurologists have now reviewed Charlie's MRI's and EEG's which were performed in January and April respectively and they have confirmed that these MRI's and EEG's showed NO actual evidence of irreversible brain damage.

Unfortunately Professor Hirano did not have access to the raw data and he based what he said in April on reports. We did not have access to these second opinions before the initial trial, hence why we are where we are today. Had we had the opportunity to have raw data of the MRIs and EEGs independently reviewed, we are convinced Charlie would be on treatment now and improving all the time.

However, we are now in July and our poor boy has been left to just lie in hospital for months without any treatment whilst lengthy court battles have been fought. We have been told time and time again that Charlie has a 'progressive disease' but rather than allow treatment for him with a medication that was widely accepted to have no side effects, Charlie has been left with his illness to deteriorate, sadly, to the point of no return.

We would like to say a few words in the hope that Charlie's life will not be in vain.

We have always acted in our son's best interests from the very beginning. We were told back in November that all his organs would fail and it was likely that we only had days left with him but to this day aside from Charlie's need for ventilation not one organ has 'failed'.

We have always been led by Charlie. I promise every single one of you that we would not have fought this hard for our son if we thought that he was in pain or suffering.

There has never been any proof that he was and we still don't think that he's in pain or suffering to this day. Having said that, we have decided to let our son go and that's for one reason and one reason only. It is because the prospect of improvement is unfortunately now too low for Charlie.

Our doctors in America and Italy were still willing to treat Charlie after reviewing the MRI head scan from July 2017 as they still felt that there was a chance of meaningful improvement in Charlie's brain. However, due to the deterioration in his muscles, there is now no way back for Charlie. Time that has been wasted. It is time that has sadly gone against him.

We now have 7 experts supporting therapy for Charlie's condition which I think is proof that it was more than reasonable to try it. Nucleosides are simply a powder that would've gone into Charlie's milk and are compounds which all of us in this room produce naturally.

Unfortunately, Charlie can't produce these due to his disease, which is why he is the way he is. We want people to realise that we have been speaking to parents whose children were just like Charlie before starting treatment and now some of them are walking around like normal children. We wanted Charlie to have that chance too.

We have been asking for this short trial for the past 8 months. Charlie did have a real chance of getting better if only therapy was started sooner. It was never false hope as confirmed by many experts.

Now we will never know what would have happened if he got treatment but it's not about us. It's never been about us. It's about what's best for Charlie now. At the point in time when it has become too late for Charlie we have made the agonising decision to let him go.

This has also never been about 'parents know best'. We have continuously listened to experts in this field and it has raised fundamental issues, ethically, legally and medically – this is why the story of one little boy from two normal everyday people has raised such conflicting opinions and ferocious arguments worldwide.

All we wanted to do was take Charlie from one world renowned hospital to another world renowned hospital in the attempt to save his life and to be treated by the world leader in mitochondrial disease. We feel that we should have been trusted as parents to do so but we will always know in our hearts that we did the very best for Charlie and I hope that he is proud of us for fighting his corner.

We will have to live with the 'what if's' which will haunt us for the rest of our lives but we're thinking about what's best for our son. We have always believed that Charlie deserved a chance at life and we knew that his brain was not as bad it was made out to be and that's why we continued.

We completely understand that everyone is entitled to their opinion and this was always going to be a matter which would cause a huge debate in who's right and who's wrong. In truth, there are no winners here.

One thing is for sure though. We know deep within our hearts that we have always had Charlie's best interests in the forefront of our minds and despite what some people think of us, we will try to walk away from this with our heads held high. As I said, we know the truth, and in our hearts we know that we have done all of this for our darling little Charlie. We have never done this for selfish reasons. We didn't keep him alive just because we couldn't bear to lose him.

Charlie had a real chance of getting better. It's now unfortunately too late for him but it's not too late for others with this horrible disease and other diseases. We will continue to help and support families of ill children and try and make Charlie live on in the lives of others. We owe it to him to not let his life be in vain.

We would like to thank our current legal team who have worked tirelessly to try and save Charlie's life and they have not asked for a single penny. They won't even let us buy them a coffee. They have done it out of the kindness of their hearts because they believed in us and they certainly believed in Charlie.

We would like to thank everybody who has supported us throughout this journey in this country and thousands of people worldwide and we also would like to thank the staff at GOSH who have looked after Charlie and kept him comfortable and stable for so long. The care he has received from the nurses who've cared for him has been second to none. But most of all, we would like to thank Charlie for the joy he has brought to our lives. The love we have for you is too much for words and we love you so very much.

Despite the way that our beautiful son has been spoken about sometimes, as if he not worthy of a chance at life, our son is an absolute WARRIOR and we could not be prouder of him and we will miss him terribly. One little boy has brought the world together and whatever people's opinions are, no one can deny the impact our beautiful son has had on the world and his legacy will never ever die.

Charlie has had a greater impact on and touched more people in this world in his 11 months than many people do in a life time. We could not have more love and pride for our beautiful boy.

His body, heart and soul may soon be gone, but his spirit will live on for eternity and he will make a difference to people's lives for years to come.

As his mum and dad, we will make sure of that. We owe that to our boy. We will do our utmost to ensure that no parents have to go through what we have been through and the next Charlie that comes along WILL get this medicine before it's too late and Charlie will save many more lives in the future, no doubt about that.

We are struggling to find any comfort or peace with all this, but one thing that does give us the slightest bit of comfort, is that we truly believe that Charlie may have been too special for this cruel world.

We are now going to spend our last precious moments with our son Charlie, who unfortunately won't make his 1st birthday in just under 2 weeks' time, and we would ask that our privacy is respected at this very difficult time.

Mummy and Daddy love you so much Charlie, we always have and we always will and we are so sorry that we couldn't save you.