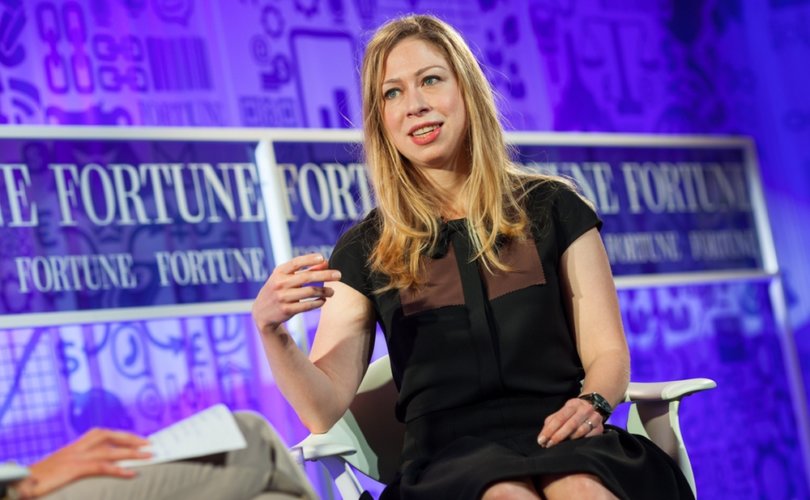 September 14, 2018 (LifeSiteNews) – Presidential daughter Chelsea Clinton is back in the news with yet another pro-abortion statement, this time invoking Christianity in support of Roe v. Wade.

The daughter of former President Bill Clinton and failed presidential nominee Hillary Clinton appeared Thursday on a SiriusXM’s “Signal Boost” interview, during which she was asked how she “keep[s] going in the hopes that your daughter doesn’t have to have this fight” to preserve Roe.

“Well, that’s the answer, isn’t it?” she responded. “I look at my children and I, to quote Jim Yong Kim, ‘optimism is a moral choice.’ Every day I make the moral choice to be optimistic. That my efforts and my energies, particularly when I’m fortunate enough to be in partnership kind of with fellow travelers, hopefully will make a difference.”

“When I think about all of the statistics that are painful of what women are confronting today in our country, and what even more women confronted pre-Roe and how many women died and how many more women were maimed because of unsafe abortion practices, we just can’t go back to that,” Clinton continued, invoking a popular yet debunked narrative that a massive number of women died from back-alley abortions in the years before Roe.

In fact, ex-abortion industry insiders admitted years ago that they inflated pre-Roe maternal deaths for political gain and that most illegal abortions were committed by licensed physicians. Additionally, statistics show that maternal deaths began declining prior to legalization, thanks largely to the invention of new drugs.

“And also, I’m sure that this will unleash another wave of hate in my direction, but as a deeply religious person, it’s also un-Christian to me,” Clinton added. That line sparked a conversation about the widespread pushback she received for her false claim last month that Roe helped add $3.5 trillion to the U.S. economy by enabling more women to join the workforce.

“I’ve been compared to slave owners and Nazis in the last couple of months,” she complained, to the sympathetic amazement of her fellow speakers.

“Just because you want women to have access to healthcare,” another participant said. Clinton agreed, and added that she was attacked for having “the temerity, as the Supreme Court did in 1992, in Planned Parenthood v. Casey, to point out that our ability to participate fully in our society, including economically, hinges on our ability to be able to make choices for our bodies and our families.”

In fact, Clinton’s critics challenged both the economic literacy and moral implications of her suggestion that the power to kill preborn children was an economic boon. Since Roe, abortion has killed an estimated 60 million people before they could be born and eventually join the workforce, almost half of whom would have likely been women.

Clinton also complained about the Nazi and slavery comparisons at the time, but never addressed the criticism’s point that abortion, slavery, and the Holocaust all entail dehumanizing and/or killing an entire class of living human beings.

As for Clinton’s latest comments, she did not cite any Bible verse or make a theological argument for a “pro-choice” Christianity, nor did she address any of the Bible’s repeated affirmations of human life or condemnations of shedding innocent blood.

In 2016, the former First Daughter claimed she left the Baptist Church “because I didn’t know why they were talking to me about abortion when I was six in Sunday school.” This January, she wished a Happy New Year to the Church of Satan’s Twitter account.