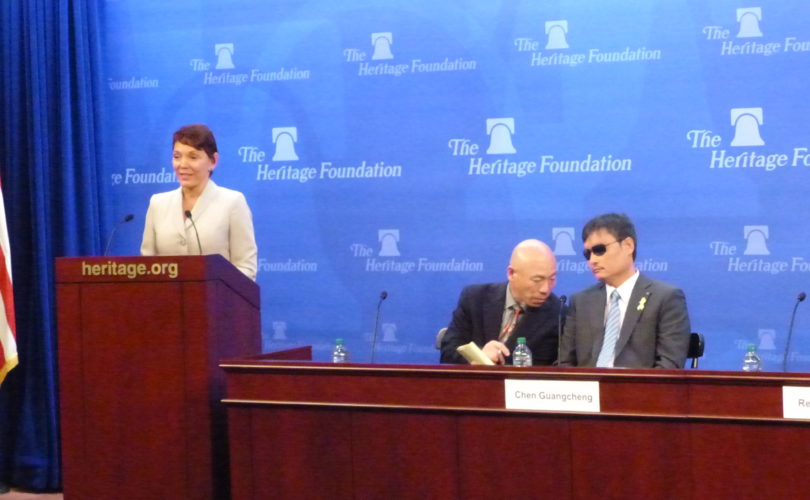 The Communist Party is “a public enemy of the Chinese people,” and is “many times more dangerous than…terrorist groups,” according to acclaimed international human rights activist Chen Guangcheng.

Chen, who is blind, came to the United States after years of being tortured and imprisoned for investigating and opposing his native China's one child policy, which is routinely enforced with forced abortions and sterilizations.

Speaking through a translator in front of over one hundred journalists, students, activists, and others at the Heritage Foundation, Chen was joined this week by Women's Rights Without Frontiers President Reggie Littlejohn and pro-life champion Rep. Chris Smith, R-NJ.

“I know of no other person on earth who has suffered so much for attempting to stop this cruelty to woman,” said Smith, addressing the crowd as he praised the much-cheered Chen. “He is a hero.”

In his remarks, Chen condemned the Chinese government, and especially its Communist leadership. “Everybody should realize that the Communist Party does not represent China, not to mention the Chinese people,” he said.

“I believe that we have underestimated the threat from the Communist regime,” he added. “They are many, many times more dangerous than the terrorist groups out there.”

According to Chen, it's not just the unborn and their families who suffer from the one child policy. Neighbors and relatives also face consequences when women have more children than the government allows.

Chen called the program “a horrible crime against the Chinese people.”

Chen – who was once a political prisoner in China – is now a Distinguished Senior Fellow at the Witherspoon Institute, a Visiting Fellow of the Institute for Policy Research and Catholic Studies at the Catholic University of America, and Senior Distinguished Advisor to the Lantos Foundation for Human Rights and Justice.

In her remarks, Littlejohn asked if pro-life and pro-abortion advocates “could at least agree on two things. Number one, forced abortion is not a choice. And number two, murder of females just because they are females is wrong.”

“The words 'it's a girl” are the deadliest words on earth when said at the birth of a child,” said Littlejohn, whose organization is dedicated to the elimination of the Chinese government's forced abortion policies, which specifically target unborn girls. “According to one UN estimate, up to 200 million women are missing in the world” because of the neglect or direct killing of baby girls because of their sex.

She said the Chinese government's estimate of some 400 million forced abortions means 1,500 abortions are happening per hour. She and Smith also pointed to other effects of the one child policy, citing a 2013 State Department report that showed 590 women a day commit suicide in China — the largest number in any nation.

Other effects of the One Child policy include demographic challenges facing China, increased incidence of breast cancer among post-abortive women, and “human trafficking and sexual slavery,” says Littlejohn. She noted that the anti-girl policies of India and China, which have one-third of the world's population, are “the biggest women's rights abuse on earth.”

Littlejohn praised U.S. allies of Chen who helped him get to safety in America. She specifically highlighted Smith and Heritage's Nick Zahn. Zahn, said Littlejohn, set up a media event that helped garner international support for Chen's plight.