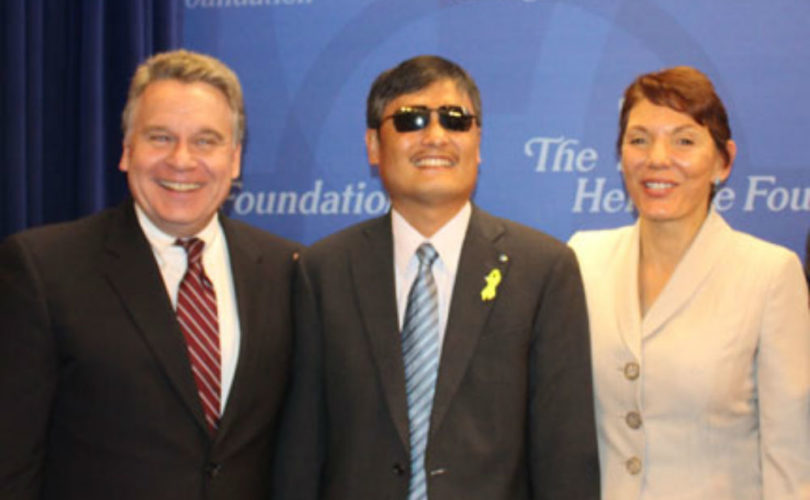 WASHINGTON, D.C., February 26, 2015 (LifeSiteNews.com) – Chen Guangcheng, the blind lawyer who exposed the brutality of China's one-child policy, is again questioning the official party line – the Obama administration's account. This time he is contradicting Hillary Clinton's story of his escape from home captivity in a new memoir.

Hillary, who was Secretary of State at the time Chen fled his captors and sought refuge in the U.S. Embassy, has steadfastly denied she lobbied Chen to leave the premises, despite tense negotiations with the Chinese. But Chen writes that he felt so pressured and abandoned by U.S. officials, he was “overcome by sadness and wept.”

Chen so angered Chinese officials by uncovering the corruption and coercion of the nation's forced abortion regime that he was imprisoned for years. After his release, he and his family were held under house arrest inside a garrisoned village.

But on April 22, 2012, Chen scaled the wall and ran, on a broken foot, for miles. After going through a series of safe houses, a car took him to Beijing, where he sought sanctuary in the U.S. Embassy.

Hillary and Chen agree on that much – but the rest of their tales diverge.

Hillary spent chapter five of her memoir, “Hard Choices” – “Beijing: The Dissident” – discussing Chen's plight. The light-selling autobiography claims that Hillary got a call on the yellow phone on April 25, telling her about Chen's plea. “I said, 'Go get him,'” she wrote, adding that it “wasn't a close call.” She later told the Council on Foreign Relations that she authorized some “James Bond-ish kind of activity” for his rescue.

But Chen's escape came just days before Clinton was to arrive in China for a diplomatic visit. Chen and those close to him have always maintained that Chen faced coercion to leave the U.S. Embassy – and that U.S. officials broke their word after he complied.

The State Department passed along threats that, if Chen did not leave the Embassy for a Chinese communist-controlled hospital, his family would face repercussions from government officials. Spokeswoman Victoria Nuland, while denying any wrongdoing, admitted that “U.S. interlocutors did make clear that if Chen elected to stay in the embassy, Chinese officials had indicated to us that his family would be returned to Shandong, and they would lose their opportunity to negotiate for reunification.”

But in “Hard Choices,” Hillary says U.S. officials were so considerate of Chen that the then-ambassador to China, Gary Locke, and State Department Legal Adviser Harold Koh “spent hours sitting with Chen, holding his hand, soothing his fears, and talking about his hopes for the future.”

Hillary maintained, “we had done what Chen said he wanted every step of the way.”

Chen tells a much different tale in his newly published memoir, “The Barefoot Lawyer: A Blind Man's Fight for Justice and Freedom in China,” portions of which were published by Canada's National Post.

Chen said he was “pressured to leave” after the State Department accepted an “absurdly inadequate deal” with Chinese officials, essentially trusting them not to harm Guangcheng and his family on their honor.

“I hadn’t expected so many people on both sides would be working so hard to get me to leave, without guaranteeing my rights or my family’s safety,” Chen wrote. “No one seemed to be putting pressure on the Chinese Communist Party; instead they were dumping shipping containers of weight onto my shoulders to get me to do their bidding.”

Ultimately, he left the Embassy, filled with “disappointment and despair.” He said he “was overcome by sadness and wept.”

“What troubled me most at the time was this: when negotiating with a government run by hooligans, the country that most consistently advocated for democracy, freedom, and universal human rights had simply given in,” he said.

Those who were involved with the events as they unfolded agree that Hillary's account is off-base.

“I completely support Chen Guangcheng's account,” Reggie Littlejohn of Women's Rights Without Frontiers told LifeSiteNews. “In sharp contrast to Hillary Clinton's self-glorifying version, the actions of the U.S. government were a great disappointment to Chen and to the human rights community.”

“Why did U.S. officials pressure Chen to leave by May 2?” asked Littlejohn, who met Chen's plane when he finally landed on U.S. soil on May 19. “This was the very day that former Secretary of State Hillary Clinton was to arrive in Beijing for trade talks. To all appearances, the State Department under Hillary Clinton was willing to sacrifice one of the great human rights activists of the world in order to conduct unimpeded trade talks.”

Littlejohn and others familiar with the events have told the same story since it occurred.

“The State Department likes to say now that they played some kind of a heroic role,” Littlejohn told LifeSiteNews in an exclusive video interview at the time. “I would dispute that characterization of their actions.”

Bob Fu, the president of China Aid and a longtime associate of Chen, said at the time that Chen Guangcheng said that “he was under enormous pressure to leave the Embassy. Some people almost made him feel he was being a huge burden to the U.S.”

After Chen left for a hospital, he said the State Department did not keep its promises to protect him.

Chen said U.S. officials were not taking his calls, nor had they accompanied him from the embassy to the hospital, as they promised. “The Embassy kept lobbying me to leave and promised to have people stay with me in the hospital,” where his room was surrounded by at least 10 plainclothes guards, he said. “As soon as I checked into the hospital room, I noticed they were all gone.”

“Nobody from the (U.S.) Embassy is here. I don’t understand why. They promised to be here,” he said.

President Obama refused to comment on the matter on April 30.

Days later, Congressional Republicans called a hearing, where Rep. Chris Smith, R-NJ, and then-Congressman Frank Wolf pressured the Obama administration to fix the “scandal.” Chen telephoned the May 3 hearing, and Bob Fu translated as Chen spoke to him: “I want to meet with Secretary Clinton. I hope I can get more help from her,” he said. “I really am afraid for my other family members’ lives.”

Chen specifically thanked Congressman Smith and other Congressional leaders in his book.

“Eventually, as a result of efforts on many fronts, the Chinese authorities had no choice but to allow me, my wife and my children to leave for the United States,” Chen wrote last year. He arrived on U.S. soil on May 19 and is now a fellow at The Witherspoon Institute.

This is not the first time Chen has criticized Hillary's book. He disputed Clinton's assertion that Chinese Communist officials had been “scrupulous” about living up to their commitments in a June 24, 2014, op-ed for The Washington Post.

“Not only has the Chinese government relentlessly persecuted members of my family since my departure, it also never investigated its prior abuses, as it committed to do. And it imprisoned my nephew, who remains in jail today,” he wrote. “Clinton and her staff were keenly aware of the attacks on my family.”

Despite the fact that Chen's account undermines a major part of Hillary Clinton's autobiography – and calls into question her judgment and commitment to human rights – it has made few ripples in the U.S. media. The two primary stories have been in Canada's National Post and the Telegraph of London.

“I bet that most of you have never heard about any of this before,” Moe Lane wrote at RedState.com. “And it’s largely because Hillary Clinton is a Democrat, and Chris Smith is a Republican.”

The America Rising PAC, a Republican political action committee, commented, “while Clinton hides from the press potentially through the summer, no one will have a chance to ask her why Chen’s account flatly contradicts her own – a story she directly profited from by including it in her book.”