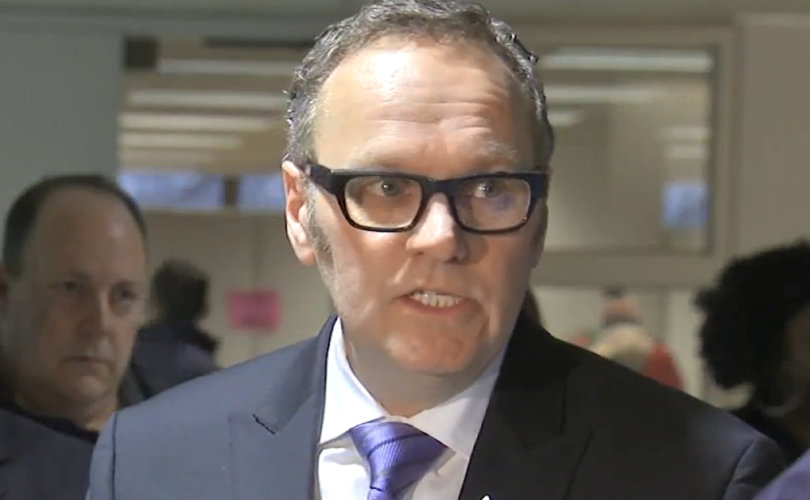 CHICAGO, Illinois, June 9, 2017 (LifeSiteNews) – A federal judge ruled in favor of the Archdiocese of Chicago and one of its parishes in a lawsuit filed by a former employee claiming discrimination for being fired after publicly announcing his same-sex “engagement” in 2014.

Colin Collette was fired from Holy Family parish in Inverness in July 2014 after he had worked there for 17 years as music director and director of worship. He refused a request by his pastor to resign after his “engagement” with his male partner was made known on social media. The late Cardinal Francis George was archbishop at the time.

The archdiocese said when Collette was fired that those working in Church ministries, including worship ministers, are expected to conform their lives publicly with the teachings of the Church, and that “This is a matter of personal integrity on their part.”

Citing the ministerial exception, U.S. District Judge Charles P. Kocoras granted the motion for summary judgment sought in the case by the archdiocese and the parish. He ruled that the Supreme Court has “recognized the right of religious organizations to control their internal affairs,” the Chicago Tribune reported, and that non-ordained employees can be considered ministerial if they are responsible for conveying a church's message, teaching the faith, and carrying out the church's mission.

As the Catholic Church faces increasing pushback throughout the country for acting to uphold Catholic principles in its employment practices, the case is a religious liberty victory for the Church. It also is of interest given the rise of apparent affirmation for the LGBT culture and its behaviors by Church leadership in various dioceses throughout the country. The affirmation has stepped up in the wake of last year’s release of Pope Francis’ controversial document Amoris Laetitia.

The document is the focus of significant ongoing debate for its suspected tacit approval of Communion for divorced and remarried Catholics, and those in other “irregular” unions, such as homosexual partnerships.

The Catechism of the Catholic Church says that “those with homosexual tendencies should be accepted with respect, compassion and sensitivity,” but also that, “under no circumstances” can homosexual acts be approved.

It states as well that “homosexual persons are called to chastity” and that “tradition has always declared that 'homosexual acts are intrinsically disordered.'”

The late cardinal has since been succeeded by Cardinal Blasé Cupich, who is known for a liberal stance on issues.

Cardinal Cupich was silent about a recent conference held in Chicago by a dissident LGBT group condemned by the Vatican and U.S. Conference of Catholic Bishops. And he has suggested more than once that if homosexual couples feel in conscience they're doing right, they should be given Holy Communion.

Cardinal Cupich has publicly criticized those who question the confusion surrounding Amoris Laetitia but was taken to task on Twitter in February for saying Amoris was in full fidelity with the Catholic Church and absolutely clear in the expression of its teaching on marriage.

Collette’s case was in progress before Amoris Laetitia’s 2015 release. He first filed suit with the federal Equal Employment Opportunity Commission (EEOC) and the Cook County Commission on Human Rights in December 2014.

He alleged that Cardinal George compelled the parish pastor to fire him and that the pastor was previously aware of his same-sex relationship.

A letter from Cardinal George had been published in Holy Family's bulletin in October 2014, the Daily Herald reported, stating Collette was dismissed for his “participation in a form of union that cannot be recognized as a sacrament by the Church.”

Collette referenced Pope Francis on Wednesday in criticizing the ruling against him.

The decision “flies in such contradiction to the wonderful things that are coming out of Rome,” Collette stated. “The pope is speaking about unity and love, and here we are creating a church of fear and division.”

But Kocoras addressed the material facts in the case and said in his ruling the law gives churches more latitude than other employers to hire and fire who they wish.

In it he wrote that whether helping to carry out Mass or playing music at Church ceremonies, Collette's responsibilities as director of music and director of worship fell into the categories he’d cited as falling under the ministerial exception — conveying the church's message, teaching the faith or carrying out the church's mission.

Collette attorney Kerry Lavelle had argued Collette's role was not ministerial, and said in a statement after the ruling that the Catholic Church has “chosen to stand behind its ministerial exception to discriminate against members of the gay community.”

“That someone of (Collette's) commitment and ability is prevented from pursuing their career in this day and age is a sign of how far some institutions have to go in accepting all members of society,” Lavelle said, “and demonstrates that there are still many individuals who are not granted equal rights in the workplace.”