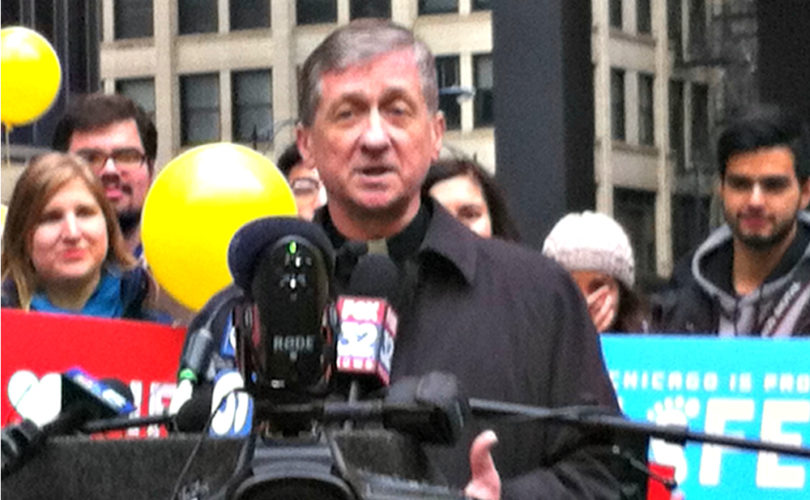 Father Martin will offer Lenten reflections on the evenings of March 22 and 23 at Holy Name Cathedral.

The Archdiocese of Chicago invited followers of its Twitter account to the Father Martin appearance on Friday afternoon and the cardinal subsequently retweeted the invite.

The invitation by Cardinal Cupich, regarded as more “progressive” among U.S. prelates, comes as heated debate surrounds Father Martin and his controversial stances in favor of LGBT activity and self-identification. The Vatican communications consultant and editor-at-large for Jesuit-run America Magazine contends that Church teaching on homosexuality could change at some point in the future.

Cardinal Cupich had expressed support during the 2015 Extraordinary Synod for those in same-sex relationships to be permitted to receive the sacraments if they have come to a decision to do so in good conscience. He has voiced that sentiment on other occasions as well.

The Archdiocese of Chicago did not respond to a LifeSite inquiry as to whether the invitation for Father Martin to speak was related to recent cancellations of several appearances the high-profile priest was to make.

Father Martin tweeted his gratitude to Cardinal Cupich within minutes of the archdiocesan Twitter invite and later shared a report on it from the dissident National Catholic Reporter that suggested the invitation was related to Father Martin’s other cancellations. He later tweeted that the cardinal extended the speaking invitation that day.

The Reporter piece led by depicting the cardinal’s invitation as God opening a window in the face of a closed door while also stating the Chicago cardinal was “the latest U.S. bishop to send a signal of support to Martin.”

The Reporter is also among the outlets reporting that “far right” protests led to Father Martin’s recent event cancellation with the Order of the Holy Sepulchre in New York City and in London for CAFOD, the Catholic international development charity in England and Wales.

The Theological College in Washington, D.C., cancelled a Father Martin appearance scheduled for its alumni days next month.

Father Martin has made statements about the cancellation being the result of campaigns against him and “anger or fear over (his) book” Building a Bridge.

In the book, he calls for the Catholic Church to be more welcoming to LGBT-identifying Catholics. However, in doing so he in part recommends the Church stop firing employees who publicly violate its teaching sexual morality and that the Church change the language on homosexuality in its catechism to be less hurtful.

Father Martin has gone so far as to call those opposed to his problematic LGBT-affirming outreach as “Catholic alt-right groups” on Twitter and in media interviews.

Other Father Martin supporters contend opposition to the priest’s stances and his appearances at Catholic venues consist of homophobia, censorship, “verbal violence” and a “cancer of vilification” in the Church.

“This campaign of distortion must be challenged and exposed for what it is,” San Diego Bishop Robert McElroy wrote in America, “not primarily for Father Martin’s sake but because this cancer of vilification is seeping into the institutional life of the church.”

“The concerted attack on Father Martin’s work has been driven by three impulses,” Bishop McElroy stated further, “homophobia, a distortion of fundamental Catholic moral theology and a veiled attack on Pope Francis and his campaign against judgmentalism in the church.”

The bishop went on to write in regard to his supposition of a distortion of Catholic oral theology that chastity is not the central virtue in the Christian moral theology and that it does not have “a singularly powerful role in determining our moral character or our relationship with God.”

And while Father Martin can draw vehement reaction for his affirmation of LGBT activity, his supporters will also attempt to equate criticism of his controversial positions with personal attacks on him, while neglecting to mention the Father Martin’s allowing unbridled nastiness from his social media followers in response to any criticism of him.

Villanova University theologian and Commonweal contributing editor Massimo Faggioli wrote in a LaCroix International piece titled “Catholic Cyber-Militias and the New Censorship” that the Theological College cancellation “was linked to a campaign of hatred and personal attacks against the priest.”

Father Martin got the lay group Catholic Vote suspended from Twitter earlier this month over CV’s chiding him for being beaten in a theological debate on the social media platform. Father Martin had contended that CV’s use of the term “beaten like a rented mule” amounted to urging violence against him.