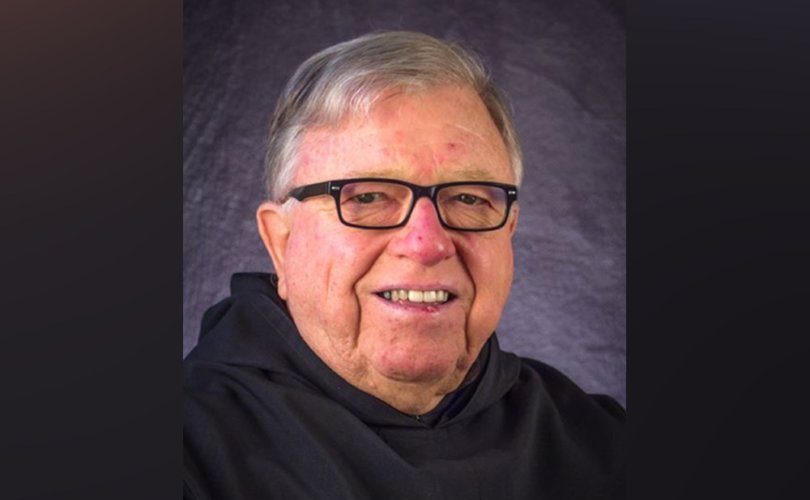 CHICAGO, October 12, 2018 (LifeSiteNews) – A Chicago priest who advertises on the internet as a “gay” masseur who does “man to man bodywork” says he has permission to host an openly homosexual group at his Catholic priory.

Openly homosexual Fr. Michael Guimon is a member of the Friars Servants of Mary — or Servites — and head of the priory at Our Lady of Sorrows National Basilica. He’s also the Servites’ formation director and senior care minister, with specialties of “spiritual companion and massage therapist.”

Fr. Guimon hosts the homosexual monthly meetup Rainbow Warriors in Our Lady of Sorrows monastery, evidently with his order's blessing.

And he appears to be thriving on Chicago’s online homosexual meetup scene.

Fr. Guimon is listed on the “Gay Body Workers” website as a professional masseur who does “Man to Man Body Work, and is signed up as both member and organizer “Michael G.” on the Mankind Pride of Chicago Meetup website for “Gay, Bi, Trans, Queer and Questioning Men.”

Moreover, Guimon’s profiles on the site (here and here) list the many homosexual meetups he’s involved with, although after LifeSiteNews contacted him, one of these has been set to private.

Fr. Guimon lives in the same archdiocese as Fr. Paul Kalchik, who was recently removed from his parish after he privately burned a rainbow-and-cross banner against the wishes of Chicago archbishop Cardinal Blase Cupich.

Fr. Kalchik, who maintains that a previous pastor of his parish died in the rectory attached to a sex-machine, remains in hiding after being threatened with commitment to a psychiatric hospital for defying Cupich and destroying the rainbow banner that once hung behind the altar as an act of “exorcism.”

Indeed, the treatment of the two priests brings into sharp relief a double standard in Chicago under Cupich’s leadership.

Known for his LGBT sympathies, Cupich’s group at the current youth synod is the only one to call for recognition of “other types of families.”  Cupich also said at the 2015 synod on the family that homosexual persons can decide for themselves if they can receive Holy Communion, a position he reiterated to ABC News.

LifeSiteNews contacted the Archdiocese of Chicago to ask if it endorsed Fr. Guimon’s activities. Communications director Anne Maselli responded by email that she would get back, but she had not by deadline.

LifeSiteNews also made multiple attempts by phone and email to contact Servite provincial superior Fr. John Fontana to verify if the Servites endorsed Fr. Guimon’s activities, but did not hear back by deadline.

LifeSiteNews also called Fr. Chris Krymski, pastor of the National Shrine of Our Lady of Sorrows, but did not hear back by deadline.

After LifeSiteNews contacted the archdiocese and the order, the Rainbow Warrior Facebook page disappeared, and the ManKindPride meetup site listing Our Lady of Sorrows as the group’s meeting site now lists it as meeting elsewhere.

Rainbow Warriors is the homosexual offshoot of the ManKind Project, which seeks to “redefine what masculinity is in today’s world,” Guimon told LifeSiteNews in a telephone interview.

The monthly meeting is a place where men are not “afraid of being judged, afraid of being told you’re no good, you’re worthless, you’re a disorder,” and where the main topic is “how we have to put up with the shame that society puts on us as gay men,” he said.

But according to the now-scrubbed Rainbow Warrior Facebook page, where Guimon’s name and phone number appeared, the men discuss much more.

They talk about “how to meet other GBTQQ men for friendship and romantic relationships, to navigating the difficulties of using social media and apps such as Grindr, where men often post false pictures or simply want to have casual sex rather than more intimate relationships.”

Or they discuss “dealing with loneliness, managing their use of pornography, developing spirituality outside of traditional religious institutions, and uncovering the gifts they can offer the broader culture.”

That’s also the description on the MKP meetup page of the group hosted by “Michael G.”

Guimon disclaimed knowledge of the Facebook page, but seemed to suggest no topic should be out-of-bounds.

“We’re talking, we’re discussing. I mean, you can’t talk about any of this stuff, only in confession?” added Fr. Guimon.

However, Rainbow Warriors is not a Catholic group, he conceded, nor is it like Courage, which supports same-sex attracted persons to live chastely.

“I mean, if you’re gay, and you want to get married, how do you live a chaste life?”

Being in ‘gay’ meetups is a ‘pastoral thing’: Guimon

Guimon stopped short of saying he supports homosexual “marriage,” but said “the whole issue of being gay in today’s church” is “an ongoing conversation in the Church today.”

“Your scope is very narrow,” he added. “A lot of Catholic theologians, a lot of Catholic people are really weary of Courage, because we know that you cannot change orientation.”

He dismissed the idea anyone would be taken aback that such a group meets in a Catholic priory.

“Oh, come on, come on. Is it really shocking to you?” Guimon said.

As for his membership in homosexual, as well as “gay” nudist meetups — where, he says, many of the men are “married” — that’s “more of a pastoral thing,” said Guimon.

“What I have discovered, it’s an opportunity for gay men to be able to talk to a priest about these issues,” he told LifeSiteNews. “I am able to listen to their questions, and be able to share information with them.”

Moreover, “I have many gifts as a gay man that society needs today,” said Guimon, an admitted fan of pro-LGBT Jesuit priest Fr. James Martin, who he sees as trying to “help people live life instead of condemning them.”

“That’s what Pope Francis is trying to do,” he added.

Guimon — who asked LifeSiteNews not to use “‘homosexual’, use ‘gay’,” — noted that “gay people are very collaborative, gay people can help heterosexual men learn how to relate with women…gay men are very spiritual.”

He also insisted he’s been a “good priest” for the last 50 years.

“Is there a problem with priests that are gay or straight, as long as we’re celibate?” Guimon asked.

“I know what the Church teaches on homosexuality,” responded LifeSiteNews.

“I don’t care about the Church teaching at the moment, I’m asking you some very important questions,” Guimon countered.

The homosexual priest was intimately connected with the case of former Servite priest Michael Bland, whose 2002 testimony to the United States Conference of Catholic Bishops of his sexual abuse by a Servite was instrumental in bishops’ adopting the Dallas Charter to protect minors.

Guimon — who said he came “out” at age 60 — was also adamant his homosexuality did not affect his judgment in Bland's case.

Ordained a Servite in 1987, Bland alleged in 1994 that then-Servite superior Fr. John Huels sexually molested him as a 15-year-old in New Jersey.

Guimon, who was second-in-command to Huels and completing a four-year assignment in Rome at the time, heard Bland’s complaint.

“Michael called me,” Guimon told LifeSiteNews. “I invited him to Rome…I facilitated the whole thing with Michael and John.”

Guimon told Huels — who admitted to the abuse — that “he had to go to treatment, he had to resign.” Guimon was elected provincial in his stead and “facilitated the whole thing until it was finished.”

As well as resigning, Huels was barred from working with minors, but did not leave the priesthood or the order. Rather, in 1997, he began teaching canon law at Saint Paul’s University in Ottawa.

When Fr. Huels’ name and place of employment became public in 2002 because of Bland’s testimony, he took a leave from Saint Paul’s, where he was vice dean of canon law, citing “severe depression.”

He also left the Servites and sought laicization from the priesthood.

However, he returned to Saint Paul’s as a layman in 2005 to teach canon law, a position he kept until September, when Bland wrote Archbishop Terrence Prendergast of Ottawa.

In the wake of the sex abuse scandals rocking the Catholic Church, Prendergast acted swiftly, writing to Bland within four days that Huels had been removed from his post, National Catholic Reporter reported.

“I can assure you that we are striving to do justice for those who have been harmed by abuse and to bring about healing,” Prendergast wrote to Bland. “Be assured of my prayers for you and all who have been victimized by clergy.”

Bland has consistently maintained the Servites asked him to reconcile with Huels, but he refused to do so, and left the order and the priesthood in 1996.

When Guimon dealt with Bland’s accusation 24 years ago, reconciliation “was in my conversation with Michael, yes, but you can’t reconcile with you’re in so much pain,” he told LifeSiteNews.

“I mean, that would be the goal eventually in life, to come to an understanding that what happened was not correct, was not the thing to do, it’s horrendous, okay?” he said.

“I would hope reconciliation would take place. That’s the message of the Gospel, to bring people together again, no matter what has happened.”