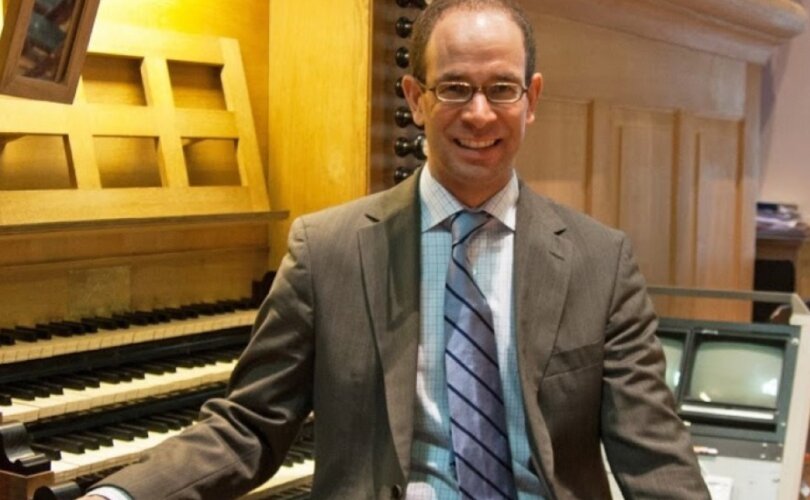 CHICAGO (LifeSiteNews) — The music director for the Archdiocese of Chicago’s cathedral allegedly attacked a leader of a monthly Rosary Rally this Saturday.

David Jonies, the organist and music director at Holy Name Cathedral, demanded that Danniel Pribble and others with the Rosary Rally stop praying on the public sidewalk outside because there was a Mass going on inside. The attendees have met every month since February to pray for an end to the Traditional Latin Mass (TLM) restrictions in the archdiocese.

“Before I could respond, [Jonies] violently tried to grab the megaphone I was using, shoving the microphone into my face as he did so. I was shocked — this was the first and only time anyone had physically assaulted any of us since we started doing these rallies,” Pribble wrote in a statement provided to LifeSiteNews.

“I immediately stopped the Rosary and told the man that what he did was assault, and that I was going to call the police,” Pribble stated. “He continued to argue that we should stop the rally, to which I responded that he should ask Cardinal Cupich to stop what he is doing to the Latin Mass. Before going back inside the Cathedral, the man said ‘I apologize’ to me.”

The organist and music director for Holy Name Cathedral, David Jonies, after reportedly pushing a Catholic leading a Rosary. pic.twitter.com/WopS4Ru6qF

Pribble’s wife called the police and a Cathedral security guard can be seen on the video immediately after the incident on the scene, encouraging Jonies to leave the situation. A priest inside the church identified Jonies from a photo he was shown.

“Later in the day, the music director / assaulter sent me an email where he used the word ‘apologize’ again,” Pribble told LifeSiteNews. “But, tellingly, he didn’t apologize for assaulting me, instead saying he was ‘deeply sorry for our interaction’ outside the Cathedral.”

While not sure of his next step, Pribble told LifeSiteNews that the incident will not sway him from fighting for what is good and true.

“The path forward with this case is unclear to me at this point,” he said.

“But what I do know is that this will not discourage us from continuing our monthly Rosary Rallies. We will never stop fighting for the Holy Catholic Faith as it has always been practiced,” Pribble said. “Up to now, the Cardinal has ignored our rallies, but we will continue, confident that Our Lady will take our poor efforts and use them for the greater glory of Her Son, and the removal of the restrictions on the Latin Mass in the Archdiocese.”

Neither Jonies nor the archdiocese spokeswoman Susan Thomas responded to a request for comment on the incident. LifeSiteNews asked Thomas if the archdiocese planned to fire, suspend, investigate or take any other actions against the music director.

READ: Leading synod cardinal defends promotion of LGBT images as part of being a ‘listening Church’

— Article continues below Petition —
Stand with pro-life priest Fr. Fidelis facing charges for trying to save unborn babies
Show Petition Text
11722 have signed the petition.
Let's get to 12500!
Thank you for signing this petition!
Add your signature:
Show Petition Text

Cupich’s archdiocese continues to be in disarray

The incident is the latest example of the disarray under Cardinal Cupich, who has continued to close churches and crack down on the traditional Latin Mass, while allowing liturgical abuses to flourish.

He has instituted a crackdown on the TLM, removing the faculties of the Institute of Christ the King Sovereign Priest for not agreeing to a variety of statements which would have gone against their charism. The document reportedly included an affirmation that the Novus Ordo Mass is the only true expression of the Roman rite.

Cupich also ordered that the Canons of Regular of St. John Cantius not say the TLM on the first Sunday of each month. His January decree banned celebration of the TLM on Christmas, the Triduum, Easter Sunday, and Pentecost Sunday, and prohibited saying Mass ad orientem without permission. No such requirement is included in Pope Francis’ 2021 motu proprio Traditionis Custodes.

The attendees at the monthly Rosary Rally have begun praying every month since February 2022 outside the cathedral, when  Cupich’s anti-TLM crackdown against Cantius went into effect.

The incident is the latest black eye for the Archdiocese of Chicago and Cupich, whom Pope Francis appointed in June 2022 to the Vatican’s Congregation of Divine Worship.

Prior to his appointment, a priest under Cupich’s purview performed the final blessing at Mass using a guitar. This same pastor and church later ended Mass, just days after the Vatican appointment, by having parishioners dance around the altar to Kool & the Gang’s “Celebration.” He also invited a lay person, in direct violation of canon law, to give not one, but two homilies.

Two weeks later, two homosexuals gave their own “Gospel reflection” during Mass at Old St. Pat’s in Chicago as part of the Father’s Day Mass.

The archdiocese, with more than 2 million Catholics, has struggled to ordain enough priests to serve the needs of the faithful. In May 2022, for example, only two priests were ordained, one of whom was with St. John Cantius.

Meanwhile, 30 priests retired, as announced by the archdiocese in April 2022.