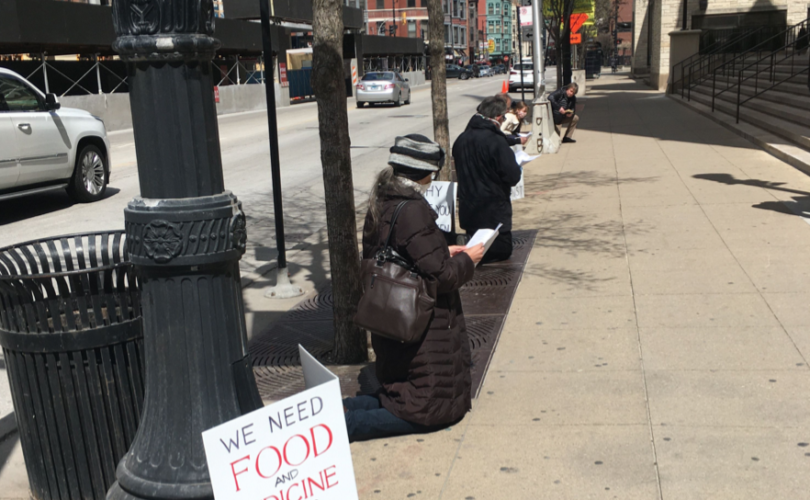 CHICAGO, Illinois, April 10, 2020 (LifeSiteNews) — Catholics from across the Archdiocese of Chicago gathered in prayer outside Holy Name Cathedral on the city’s near north side at noon today in an effort to raise awareness about how churches are and must be treated as “essential” during the COVID-19 outbreak.

Like other large cities, Chicago has been cracking down on public gatherings of any kind since pro-abortion Illinois Governor J.B. Pritzker issued his stay-at-home executive order on March 21. Chicago’s Archbishop, Cardinal Blase Cupich, has closed all schools and churches and has forbidden “any public celebrations, even outside including live Stations of the Cross on Good Friday.”

Lisa Bergman, the event’s lead organizer, said she was expecting law enforcement to show up, and that she was willing to go to jail if they did, but that she didn’t experience any problems during her time outside the cathedral. Two passersby happened to join in as Bergman, a graduate of the University of Notre Dame who now runs St. Augustine Academy Press, prayed the Stations of the Cross with her fellow Catholics.

Although less than a dozen people showed up in person for the prayerful protest, Bergman said there were “many, many more” Catholic in the diocese who expressed solidarity with her and wanted to go but couldn’t due to health issues or family obligations. One person who did attend brought a sign that read, “400 inside Costco, why not 20 in Church?” Bergman told LifeSite she was inspired by the Acies ordinata protests that have been held in Rome and Germany over the last several years.

Bergman released a statement to LifeSite explaining why she organized the protest. In her letter, she argues that it’s not reasonable or honest to say that shopping centers, liquor stores, coffee shops, and other businesses should be open while “we can’t allow a lesser number of people inside a church.”

“Throughout history, when plague and destruction have struck, Christians have been the ones to run toward it, to fulfill the call of the Gospel, to care for the sick….but now we are being told that the Church is not essential,” she explains.

Noting that “the sacraments are wellsprings of grace for the Church,” Bergman calls to mind how Peter was fleeing Rome but then Christ appeared to him and “one look from his Lord was enough to send him back” to his crucifixion. “Now,” Bergman continues, “our Lord looks at us…as we shelter away from this virus and its fearful consequences, our Lord is walking toward it.”

Bergman said that the hundreds of Catholics she reached out to in the weeks leading up to today would agree with her statement, which can be read in its entirety below. For now, Bergman does not have future plans for other protests, though she believes others will join in similiar prayerful activities in public if churches remain closed.

As we enter Holy Week, we call to mind that Christ was obedient unto death…and that the sacraments are wellsprings of grace for the Church because of our priests’ imitation of His obedience.

We too are doing our best to imitate this obedience. But as we shelter away from this virus and its fearful consequences, our Lord is walking toward it.

Where are you going, Lord?

I go to be crucified again.

Throughout history, when plague and destruction have struck, Christians have been the ones to run toward it, to fulfill the call of the Gospel, to care for the sick, feed the hungry, shelter the homeless. We give as Christ gave, because our treasure is in heaven.

But now we are being told that the Church is not essential.

We are willing to let people die utterly alone…but churches are dangerous.

For generations, Christianity has been declining in the West, but if we needed proof of where we stand, here it is.

What can we do? We feel now some of the anguish that Christ’s disciples felt as He went to His death. They could do nothing. They hid for fear. Peter denied Him three times.

How much greater was the anguish in Peter’s heart, as he fled from Rome years later, and the vision of Christ appeared to him, going to be crucified again? Every ounce of human prudence told Peter he should escape to fight another day. But one look from his Lord was enough to send him back.

Now our Lord looks at us. We are following the dictates of human prudence as we ought. He does not reproach us…but He walks the other way. He waits for us to ask Him, “Where are you going, Lord?”

We owe our obedience to our lawful authorities, both in the state and in the Church. Love of neighbor dictates that we must do our part to help limit the spread of this virus. For this reason our Bishops have released us from our Sunday obligation.

But love of neighbor is only half of what we are called to do as Christians, because our life here on earth is not the only one we have to secure. First and foremost, we must love the Lord our God with all our heart, with all our soul, and with all our strength.

If we don’t use our heart and soul and strength to defend our Lord and His Church, and insist that our churches are essential, and must be treated as such, then we must contend with Matthew 10:32-33:

It is not reasonable to assert that there can be 400 people inside your local Costco, with some woman touching every single bag of lettuce on the stack, and then to say that we can’t allow a lesser number of people inside a church.

It is not honest to say that we need to allow people to buy liquor and marijuana and mocha lattes to help keep them happy, but that we can’t allow our churches to be kept open for private prayer.

And most of all, it is not honorable to have lines for pizza takeout stretching around the block, while prohibiting churches from finding creative solutions for outdoor services to safely serve their flocks.

So if respectful Civil Disobedience is what it takes to make this point, then this becomes our duty. When we ponder the sacrifice of Christ, magnified by what the saints were willing to suffer for His sake, we must be willing to take up our cross too.

Some say that it is selfish and irresponsible to put people’s lives at risk, when we have the safe option of livestreamed Mass. But a thousand livestreamed Masses can never add up to a single live Mass, where we offer the perfect sacrifice to God, and where He comes to us. Our life on earth can end at any moment, for any reason; are we content to put souls at risk?

Every business and public place that is open right now could equally be a source of risk. But some things we can’t do without, like food, and some things it is not prudent to do without, like fresh air and exercise. People are dying without the Last Rites, and Confession is available in emergencies only. Where do we draw the line? Are we content to say that it is prudent to do without the Sacraments…that feeding our souls doesn’t matter?

What about that Korean church, or that church choir in Washington? They all got sick! Yes, and in neither case were they implementing best practices for social distancing. Our churches are not inherently dangerous; on the contrary, they are a major part of the solution to what ails us. With creativity and perseverance, we can give God the worship He is due, in ways that are safe.

We are doing our best to be patient, to offer up this sacrifice, and we have gained untold spiritual benefits by doing so. But no one knows for certain how long this will last. When we fast, we know that there is an end in sight to our fasting. God does not ask us to starve ourselves to death, nor is it His Will that we do without any of the Sacraments for long periods of time. We wouldn’t accept being denied other necessities, and we shouldn’t accept it for this.

But above all, we owe it to ourselves to look at the English Catholics who risked everything to practice their faith…at the Christians of the Catacombs who endangered their lives for every Mass…of the Catholic Church in Poland under Communism…and ask ourselves: do we not have the same call they did? Each faced a different challenge, and each rose to meet it with fidelity to the Cross. Can you name a single saint who would have tolerated what is happening right now? I can think of not one.

It is our sacred duty as the Mystical Body of Christ to insist that our faith is just as essential as food, healthcare, gas stations, hardware stores, restaurants, laundries, the postal service, plumbers and electricians, etc. This does not mean that we should recklessly disobey the mandates we have been given, to the extent that they are just and for our good; in fact, for most, it is prudent to stay home and not frequent the sacraments as often.

But to the extent that these mandates are unjust to the practice of our Faith, which is truly necessary for our health, both in this life and the next, we must do what we can to unshackle our Church and allow the healing waters of the Sacraments to flow once more. Then, lit by “the True Light that enlighteneth every man,” She can stand once more as the beacon of hope for all amidst the darkness of fear, rather than hiding that light under a bushel.