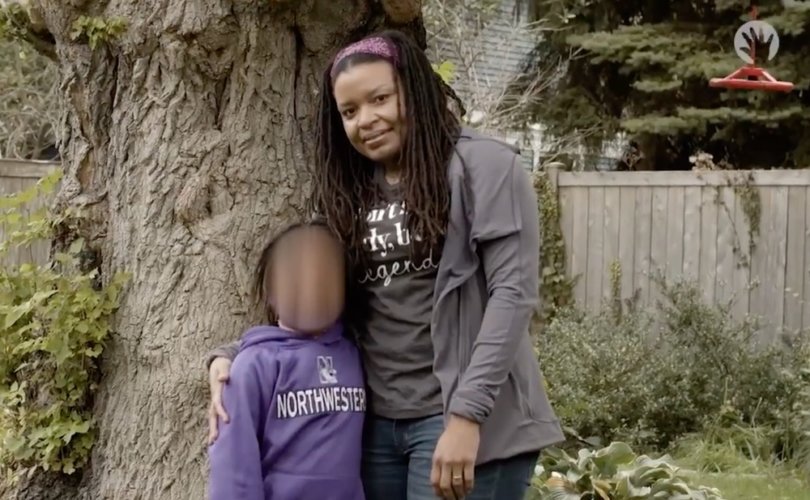 CHICAGO (LifeSiteNews) — A nationally-ranked Chicago children’s hospital is drawing backlash for a video in which an adoptive mother appeared to coach her child into discussing her adherence to radical gender ideology.

In a recently resurfaced February 2021 video published by Lurie Children’s Hospital in Chicago, adoptive mother Karla sat down with her adopted daughter “Tru” to “talk about gender.”

EXCLUSIVE: Lurie Children’s Hospital of Chicago published this video promoting a woman who facilitated her adopted child’s transition to “non-binary” at “five or six” years old. The child “wasn’t a girl or a boy” and now uses “they/them” pronouns. pic.twitter.com/e6Nir1bK37

“My birth parents said that I was a girl, but they made a mistake,” Tru told Karla when asked “what is gender to you?”

While it’s unclear what factors led the girl to allegedly adopt a divergent sexual identity, a separate video published by the hospital states that Karla herself is in a same-sex relationship.

In the video, Karla told Tru that she had also initially “assumed” her daughter was a girl and asked the child to explain when she “set” her adoptive mother “straight.”

After Tru said it began when she was “at least five or six,” Karla corrected her: “It started before that.”

Agreeing with her adoptive mother, Tru added that she’s not really a boy or a girl, but “nonbinary.”

“How do you feel about being nonbinary?” Karla asked.

Karla then directed Tru to say whether or not she had spoken with the children in her class about her gender, and how it made her feel to share her pronouns.

Tru responded that she told her classmates about her gender and pronouns, and it felt “really really good.”

RELATED: Mother claims son communicated being ‘transgender’ at ‘the earliest moment’ he ‘had words’

Daily Wire commentator Matt Walsh blasted the mother in the video during a Tuesday podcast episode.

“We’re supposed to buy that as some sort of organic conversation, while the child is obviously repeating what has been rehearsed,” Walsh said.

The writer, podcaster, and father of a large Catholic family said watching the video made him think of his own boys who he said could spend hours “running down the shoreline excitedly picking up rocks.”

According to Walsh, the subjects the child in the video is discussing, or “the lines that she’s being coerced into repeating,” are entirely unknown to his own children, who he said have never heard the term “nonbinary” and who spend “zero percent of their time thinking about pronouns.”

“No child thinks about any of this stuff or wants to think about it,” he said. “This has to be imposed from the outside. Their innocence is ripped away, and this is put in its place.”

.@MattWalshBlog on a video from Lurie Children’s Hospital highlighting a “non-binary” child: “No child thinks about any of this stuff or wants to think about it. This has to be imposed from the outside. Their innocence is ripped away, and this is put in its place.” pic.twitter.com/nKwGg4CnNI

The resurfaced video about the young girl’s alleged “nonbinary” gender identity is part of a “Never Fear” series published by Lurie Children’s Hospital in Chicago.

Other videos feature such topics as “pronouns,” “LGBTQ+ affirming schools,” sex ed, and HIV/AIDs, all aimed at children and teens.

In 2015, Lurie Children’s Hospital’s so-called “Gender and Sex Development Program” was featured in a FRONTLINE documentary about “transgender children” called “Growing Up Trans.”

Clinical services currently offered by the children’s hospital include puberty suppression, menstrual suppression, hormone therapy, and referrals for “gender-affirming” surgery, including “chest surgery, surgery involving reproductive organs, and surgery on facial structures.” The hospital states that it can begin transgender treatments for patients no older than 22, continuing until the patient turns 25.

The institution also promotes affording “transgender youth” the opportunity to have “a legal name or gender marker change,” and provides a link to an organization called the Transformative Justice Law Project (TJLP), which states it is “deeply committed” to “the universal right of gender self-determination,” along with a separate mission of abolishing prisons.

LifeSiteNews reached out to Lurie Children’s Hospital to inquire why the medical institution would advance a radical ideology that can cause irreparable psychological and physical harm to children. The hospital did not immediately respond to LifeSite’s request for comment.