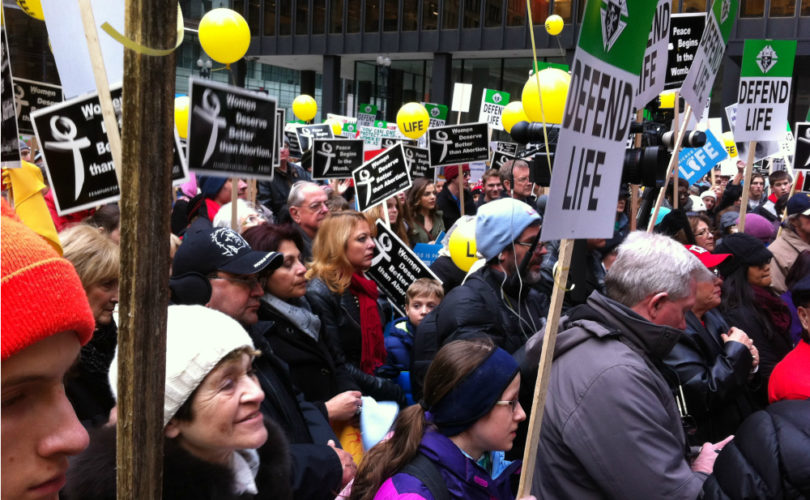 The 10th annual March for Life Chicago surpassed predictions, drawing a crowd estimated at twice the size of last year’s, while gathering notable figures and marchers across generations and religious denominations.

The numbers bested forecasts of 3,000. Illinois Right to Life, a March for Life Chicago sponsor, called the 2014 March “the largest Chicago March for Life ever,” with a crowd numbering 2,000.

“I’m so glad that thousands of people turned out to tell Chicago that life matters,” Emily Zender, president of March for Life Chicago, said in a statement to LifeSiteNews.

Marchers heard from Archbishop Cupich, chosen to head the Chicago archdiocese in late 2014.

“We are here to do everything possible to make sure that the right to life is preserved,” the archbishop told the crowd, according to the March statement.

“It's important for all of us to remember why we are here,” Archbishop Cupich said, according to the Chicago Tribune. “We need to bring to attention that there are those literally struggling to come into the world. We can't sit still. We have to march.”

Despite his battle with cancer, retired Chicago Archbishop Cardinal Francis George spoke at a March for Life Chicago brunch sponsored by the Chicago-area pro-life organization Aid for Women, a report from ABC 7 said.

“Life is never isolated. We think of ourselves as individuals, but we're not,” Cardinal George said. “We're a network of relationships first.”

Mary-Louise Hengesbaugh, former Respect Life Director of the Archdiocese of Chicago and 1999 Miss Wisconsin, was emcee for the event, which brought “huge” Catholic participation from across the Midwest, according to organizers.

There was representation from numerous faith traditions in the crowd, including Orthodox church leaders, such as the Right Reverend Anthony, Bishop of Toledo for the Antiochian Orthodox Church, and the Right Reverend Paul, Bishop of Chicago and the Midwest for the Orthodox Church in America, as well as Pastor Mark Jobe, founder of New Life Centers, and Reverend Erwin Lutzer, senior pastor of Chicago’s historic Moody Church.

Katie Melody, head of Students for Life of Illinois, remarked that young people have never known a world without abortion.

Melody said the younger generation is “hurting,” and that abortion hurts her generation the most, according to the Chicago Sun Times.

“Unfortunately for my friends and myself, abortion has always been a reality in our lifetimes,” she said. “We come of age in a world where destroying a pre-born life is considered normal.”

Congressman Dan Lipinski pledged support for the proposed bill to ban abortion after 20 weeks, with some exceptions, that is currently in the U.S. House. Congressman Peter Roskam spoke about how his daughter’s social media posts from last year’s march led a college friend to choose life for her unborn baby.

Bears co-owner Pat McCaskey read a pro-life adaption of the classic Tennyson poem, “The Charge of the Light Brigade.”

Eric Scheidler, executive director of the Pro-Life Action League, spoke along with his father, pro-life icon Joe Scheidler, as well as his son, pro-life blogger Sam Scheidler. Pro-life advocate Sandy Hiltebrand spoke as well, along with her daughter Julie Cooper, and granddaughter, Mary.

“We are fighting for your right to life,” Johnson told them, saying this is “not just about the babies, but about everyone – everyone has a right to live and breathe.”

Zender and organizers were happy with the remarkable turn out in support of life.

“Abortion tells us that we are essentially disposable. What a disservice – and insult – that is to every one of us,” Zender said. “All of these people came here to firmly proclaim that each human being, from conception through natural death, is important and has the right to life.”