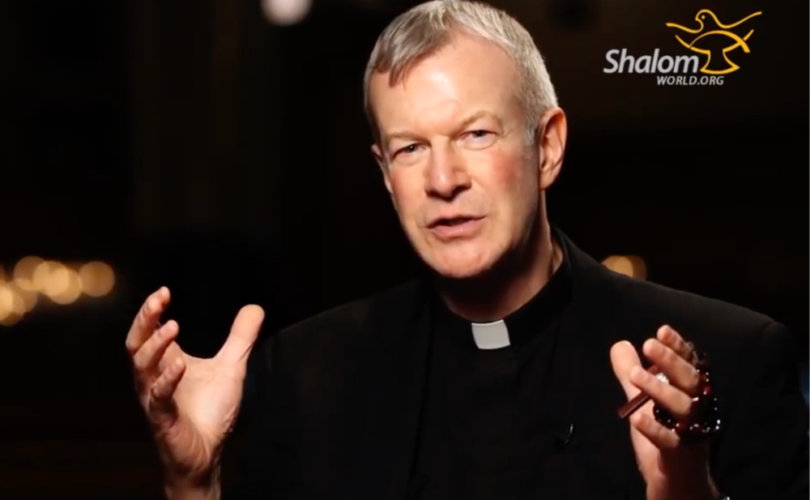 CHICAGO, Illinois (LifeSiteNews) – A well-known Chicago priest has been sternly reprimanded by Cardinal Blase Cupich after he wrote a letter to the prelate criticizing the decision to prohibit saying Mass facing east and noting how faithful Catholics are “cruelly demoralized” by persecution from Church authorities.

Father Anthony Buś, C.R, of Chicago’s St. Stanislaus Kostka Church, has been seemingly ordered into a 10-day private retreat after earning the rebuke of Cupich who suggested the priest was publicly inciting “animosities or hatred against the Apostolic See or an ordinary,” due to his request to celebrate Mass ad orientem.

The rebuke came after a series of letter between the Archdiocese of Chicago and the priest, who has been described as “one of the hardest working priests in Chicago.”

In light of Cardinal Cupich’s new restrictions on the Mass, Buś initially wrote December 15, 2021 to Chicago’s Auxiliary Bishop Robert Lombardo, asking for permission to continue to say Mass “ad orientem,” in line with the Catholic Church’s “General Instruction of the Roman Missal.”

Such a practice “has transformed my priesthood immensely and has been transformative for those who find here all those wonderful places of encounter with the Lord as written about in Sacred Scripture,” Buś wrote. Fr. Buś has previously defended and explained the practice of celebrating Mass in this manner on the parish website.

His request to continue saying Mass thus was refused by Cupich, and in a second letter dated January 13, Buś clearly stated he would obey the order: “I will comply with his directive that this is forbidden in his Archdiocese.”

The priest, who hosts a popular daily radio show, also critiqued Cupich’s outlawing of Mass ad orientem. “Even so, the Archbishop does not provide evidence that ‘Ad Orientem’ was abrogated at the Second Vatican Council,” Buś wrote.

“As I read Sacrosanctum Concilium and the Roman Missal, the implication is ‘Ad Orientem’ was not abolished or prohibited — on the contrary.”

Buś slated those who had a “glorious time after the Council, taking liberties to ‘change the face of the Church.’”

He referenced the “constant chiding” of Pope Francis toward Catholics who want to “remain in solidarity with our ancestors who heroically and courageously defended the faith in times of persecution,” and how such Catholics are being “cruelly demoralized — thrown into confusion, which is something the Pope admittedly takes joy in, and are purposefully being pushed to the fringe.”

“I don’t mean to be offensive, but my words come from a place of having been offended over and over again for far too long,” Buś lamented. “I speak for many because I listen to many who are away from the faith or trying hard to hold to the faith.”

Accused of inciting unrest in the Church

Following the two letters, which were published on the parish website and elsewhere, Fr. Buś was reportedly summoned to meet with Cupich on January 17, and hours later posted a new letter online that replaced his original. In the new letter, Buś expressed his “deep-felt sorrow” that his January 13 letter was “interpreted by social media as though I was being unjustly critical of, disrespectful to, or lambasting the Holy Father, the Cardinal Archbishop of Chicago or Bishop Lombardo.”

Buś wrote: “As was stated to me, the letter verges on a violation of Canon 1373: ‘A person who publicly incites among subjects, animosities or hatred against the Apostolic See or an ordinary because of some act of power or ecclesiastical ministry or provokes subjects to disobey them is to be punished by an interdict or other just penalties.’”

Wow! Father Anthony Bus, The Chicago priest who wrote to the auxiliary bishop to share with him the pain he felt about not being permitted to offer Mass ad orientem, has been called in and threatened. It seems Card Cupich is interpreting the heartfelt letter as a personal attack. pic.twitter.com/VwCj5lQQFp

Buś further noted how he had been accused by the Archdiocese of possibly violating Canon 1369, suggesting that he “utters blasphemy, gravely injures good morals, expresses insults, or excites hatred or contempt against religion or the Church.”

Buś reiterated that he had no intent of violation either aspects of Canon Law, and simply “wrote for love of the Church to whom I’ve given my life. I have always acted for love of God and I have the deepest regard for the Papacy and the Prelates of the Church.”

“As a priest, I am bound to the Lord in service to His Mystical Body,” he added. “As a priest, as with all popes, prelates, priests, and deacons, I am not above challenge.”

Reaffirming his “high regard” for the documents of the Second Vatican Council – which he had originally quoted when defending the practice of Mass ad orientem – Buś does not wish for “any further division in the Church.”

“I do, however, feel the Body of Christ is broken and I felt before Almighty God and the Blessed Virgin Mary, I had acted in a manner to assist in its healing,” he added.

He announced that he will now spend 10 days in retreat to “reflect on my priesthood.”

“I will be praying for all of you and the Church Universal,” Buś closed. “I will always safeguard the peace and tranquility of our worship here at St. Stanislaus Kostka Parish – the people entrusted to my care and whom I love dearly.”

LifeSiteNews contacted the Archdiocese of Chicago for further comment but received no answer.

The faithful priest was defended by Bishop Joseph Strickland of Tyler, Texas, who criticized Fr. Buś’ punishment, and stated he saw “nothing disrespectful” in either the “tone or in his actual words.”

I’ve re-read Fr Bus’s letter and I see nothing disrespectful in his tone or in his actual words. It is a heartfelt cry from a priest who is hurting deeply & speaks for many, many others. He should be comforted rather than being disciplined. https://t.co/qgnel3rXg2

Thank you, Your Excellency.

Respectfully expressing concern for souls to your superior is never “disobedience” and should be encouraged, not punished. https://t.co/BwThUJnrzp

A bishop repeats his praise for a priest in another diocese for challenging his own bishop. https://t.co/411gwQKSpS