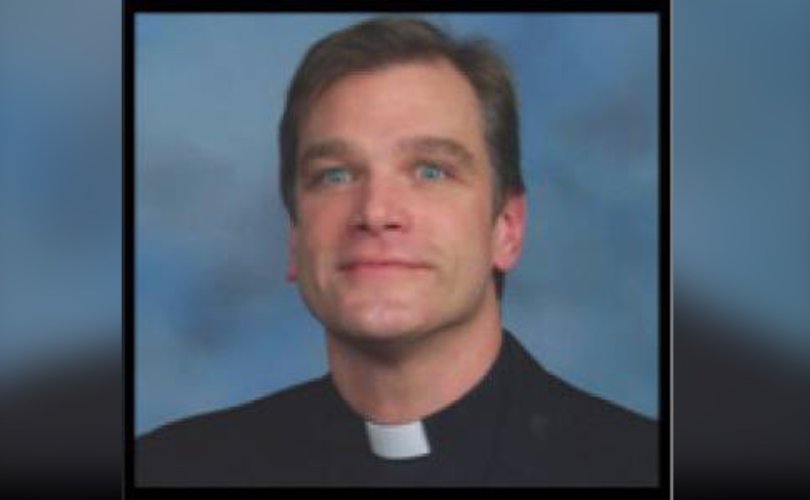 September 19, 2018 (LifeSiteNews.com) – A Chicago priest and his parishioners have burned a rainbow flag that was once displayed at the parish, in an act that the priest has called an “exorcism,” in apparent defiance of the Archdiocese of Chicago, led by pro-LGBT Cardinal Blase Cupich.

Although a spokeswoman for the archdiocese told the Windy City Times that “the pastor has agreed not to move forward with these activities,” after Fr. Paul Kalchik of Chicago’s Resurrection Parish said he would burn the flag publicly, the priest went ahead with the event in private, joined by several members of the parish. They reportedly prayed prayers of exorcism as well.

Kalchik told the Chicago Sun-Times that he was the victim of homosexual sex abuse by a neighbor as a child, and defended his actions as a response to homosexualist “propaganda” in the Catholic Church.

“That banner and what it stood for doesn’t belong to the Archdiocese or Cardinal Cupich. It belongs to the people of this parish who paid for it,” Kalchik told the newspaper. “What have we done wrong other than destroy a piece of propaganda that was used to put out a message other than what the church is about?”

“The people of this parish have been pretty resilient and put up with a lot of B.S.” Kalchik told the Sun-Times. “And it was just by accident that this banner that was made to celebrate all things gay … did not get destroyed when I first got here.”

It is not clear if the priest also burned donation pledge cards as he had planned to do, in likely response to corruption in the archdiocese revealed in recent scandals involving Cardinal Cupich.

The burning was carried out in “a private way, a quiet way, so as not to bring the ire of the gay community down upon this parish,” Kalchik told NBC News on Monday. “It’s our full right to destroy it, and we did so privately because the archdiocese was breathing on our back.”

Kalchik told NBC News that the flag was a “profane” symbol because it mixed the LGBT rainbow with a cross, and said that using the cross as anything other than a “reminder of our Lord’s passion and death . . . is what we consider a sacrilege.”

“So in a quiet way we took matters into our own hands and said a prayer of exorcism over this thing,” he said. “It was cut into seven pieces, so it was burned over stages in the same fire pit that we used for the Easter vigil mass.”

The event followed an announcement in the parish bulletin on September 9 that stated, “On Saturday, September 29, the Feast of Saints Michael, Gabriel, and Raphael, we will burn, in front of [the] church, the rainbow flag that was unfortunately hanging in our sanctuary during the ceremonial first mass as Resurrection parish. We will also burn our pledge cards and prayerfully sing Psalm 141, ‘Let my prayer arise before you like incense, my hands like an evening offering.’”

“As our long Church History has shown us, few betrayers of Christ are like Judas, who came to some sense of remorse, and exited out of his own accord. Most stick around and wreak havoc for as long as they possibly can. Arrogant narcissists do not give up power easily,” Fr. Kalchik wrote to his parishioners in the same bulletin, and quoted the “cutting reflection of” a Catholic priest of the Anglican Ordinariate, Rev. Dr. Jules Gomes. Gomes wrote: “The lust for power and the power of lust, are often intertwined,” in an apparent reference to the sex abuse and gay predation scandals recently arising regarding ex-Cardinal Theodore McCarrick and those bishops who are perceived as associated with him.

“What, you might be wondering, do the faithful remnant need to do today?” added Kalchik. “Firstly, pray, pray for the strength to remain faithful during these trying times, but also for the RESTORATION of an orthodox Roman catholic Church, and not some denigrated semblance of it run by some bad bishops.”

“The focus must always be on bringing people to Christ and saving souls,” continued Kalchik. “We cannot let the current troubles keep us from our mission to go make more disciples for the Lord, nor should modern day distractions like global warming, LGBT ‘rights’ or even immigration issues ever take precedence over that mission.”

No announcement has been made yet of retaliation against the priest by Cupich. However, Fr. James Martin, a Jesuit priest who actively promotes the LGBT agenda and homosexuality in the Catholic Church, condemned the burning on his Twitter account.

“I cannot imagine a more homophobic act, short of beating up an LGBT person. Note that the pastor defied the archdiocese and took part in the ‘exorcism.’ And connecting it to the Easter Mass is a scandal: Easter is about love; this is about hate.”