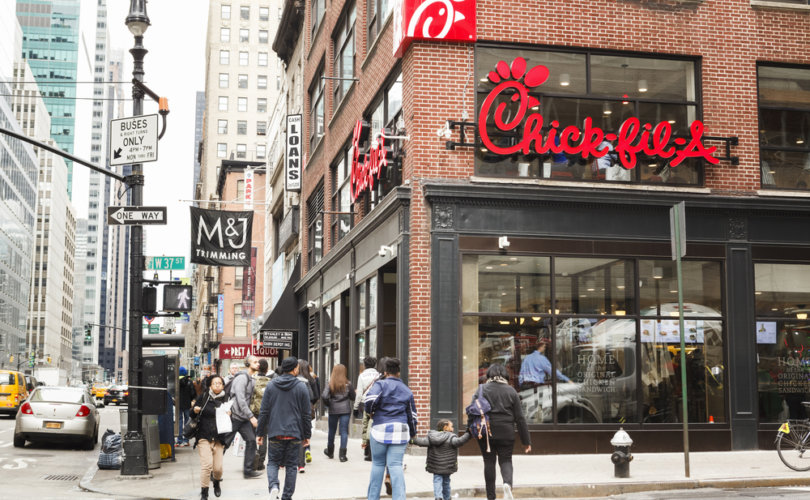 May 17, 2019 (LifeSiteNews) – The head of Chick-fil-A’s charitable organization defended its association with socially-conservative nonprofits this week, explaining in a new interview that it serves a moral duty beyond the objections of any ideological lobbying groups.

Chick-fil-A is famously operated on the Christian principles of its national leadership, including closing on Sundays, listing “to glorify God” as part of its corporate purpose, and its active charitable arm. For years, liberals have advocated boycotting the chain due to CEO Dan Cathy’s stated opposition to same-sex “marriage” and the company’s donations to social conservative groups such as Family Research Council and Focus on the Family.

The attacks on Chick-fil-A intensified somewhat after a report from the left-wing ThinkProgress that despite prior word that Chick-fil-A might be scaling back such donations, tax filings showed the company donated more than $1.8 million in 2017 to the Fellowship of Christian Athletes (FCA), Paul Anderson Youth Home, and Salvation Army, all of which have been attacked as “anti-LGBT” for taking traditional biblical stances on homosexuality.

The Christian Post reported that Business Insider published Tuesday an interview with Chick-fil-A Foundation executive director Rodney Bullard, who addressed those complaints among other topics.

“In the case of the Fellowship of Christian Athletes, it really is about the kids and it's about the effort,” Bullard said. “I think the reporting hasn't talked about what it actually is. In that case, it's very important to not forget the mission of what we're doing.” The Salvation Army partnerships, he added, have “nothing to do with anything but bringing kids over and helping to expose them.”

The report then quoted Carrie Kurlander, Chick-fil-A's vice president of external communications, who explained that the “intent is to expose them to all of the gateway to college exposure, in sports, as role models, all of that.” The company expected going in to “get dinged” over FCA’s purity pledge but decided to proceed anyway because “the impact is real and authentic.”

“At the end of the day, the calling for us is to ensure that we are relevant and impactful in the community, and that we're helping children and that we're helping them to be everything that they can be,” Bullard said. “For us, that's a much higher calling than any political or cultural war that's being waged. This is really about an authentic problem that is on the ground, that is present and ever present in the lives of many children who can't help themselves.”

He rejected the notion that Chick-fil-A’s Christian values “exclude anyone,” because “It's every child regardless of any type of religion, ethnicity, geography, anything. It's every child. So there's no balance on that part. It's not something that we ever have to think about.”

When Business Insider’s Kate Taylor asked whether Chick-fil-A would ever consider partnering with an LGBT youth organization, Bullard said the company would “consider any partnership that was impactful and that was authentic” to “get work done,” but would not “do it just for reasons that weren't authentic.”

Despite pro-LGBT activists’ common insinuations that the company’s Christian conservatism translates to “excluding” or otherwise mistreating anyone, many homosexual employees and customers have attested to positive, welcoming experiences with Chick-fil-A. Nevertheless, the company has faced efforts to exclude it from college campuses, airports, community events, and more.

New York Mayor Bill de Blasio and Twitter CEO Jack Dorsey are among the prominent figures who have condemned the company as beyond the pale. In March, pro-LGBT media outlets criticized President Donald Trump for serving Chick-fil-A during the North Dakota State University Bisons’ visit to the White House.