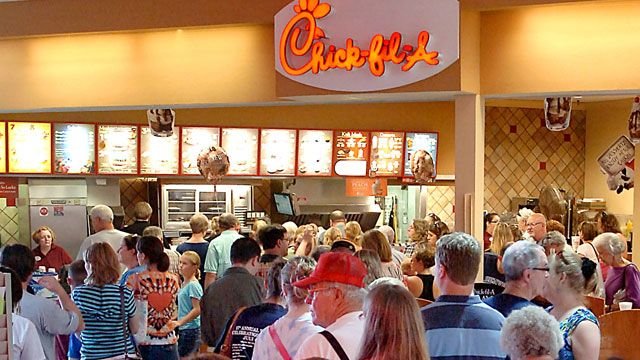 November 18, 2019 (LifeSiteNews) – For years Chick-fil-A has risen the fast-food ranks thanks in no small part to its proud Christian identity. But in a stunning reversal, the chicken restaurant announced Monday that it will end charitable donations to several Christian groups branded by pro-LGBT activists as “anti-gay.”

Chick-fil-A enjoys tremendous success and an overwhelmingly positive reputation due to its service as well as its charitable bent and volunteerism during tragedies and disasters. Furthermore, for all the “anti-LGBT” branding, many homosexual employees and customers have attested to positive, welcoming experiences at Chick-fil-A.

The chain’s steady success in the face of left-wing pressure campaigns – its sales have actually doubled since the boycotts began – would seem to have closed the matter, yet Bisnow reports that starting next year, Chick-fil-A will stop donating to Salvation Army, the Fellowship of Christian Athletes (FCA), and the Paul Anderson Youth Home in favor of refocusing its giving on the causes of education, homelessness, and hunger, through the organizations Junior Achievement USA and Covenant House, as well as to various community food banks.

All three of those organizations have been attacked as “anti-LGBT” for taking traditional biblical stances on homosexuality.

The company is framing the change not as an express disavowal of the previous recipients, but as part of a reorientation toward “critical issues in communities where we do business in the U.S.” But statements from company officials do appear to acknowledge a public-relations motivation, as well.

“We made multi-year commitments to [Salvation army and FCA] and we fulfilled those obligations in 2018,” a Chick-fil-A spokeswoman told Reuters. She did not answer whether pro-LGBT protests influenced the company’s decision.

The news was met with swift disapproval from various conservative and pro-family commentators:

Chick fil A defied the LGBT rage mob for years and only grew in popularity because of it. Now all of a sudden they cave. This is the most pointless and counter productive surrender I’ve ever seen.

Shame, shame on you, @ChickfilA. You are the 3rd most successful fast food franchise in the US. You had no reason to capitulate. But you did. Yes, shame on the progressive bullies too — yet the greater shame is yours, Chick-fil-A, you cowards. https://t.co/eTfALNMUz4

So now chicken restaurants can't feed the poor, unless Christian missionaries endorse sodomy. But hey, this was all about “tolerance” remember?

Dear @ChickfilA,
America rewarded you for standing up to the progressive bullies. Why would you do this and align with the same people that STILL hate you, over your own allies? So disappointing.https://t.co/q1Y28rSOsy

Wanna know why the Left keeps cancelling everyone and going after corporations like #ChickFilA?

Because it works. Because most people cave.

Chick-fil-A’s latest move stands in stark contrast to the company’s defense of the so-called “anti-LGBT” donations as recently as May, when Chick-fil-A Foundation executive director Rodney Bullard and Chick-fil-A vice president of external communications Carrie Kurlander defended the good work all three organizations did for children.

“At the end of the day, the calling for us is to ensure that we are relevant and impactful in the community, and that we're helping children and that we're helping them to be everything that they can be,” Bullard said at the time. “For us, that's a much higher calling than any political or cultural war that's being waged. This is really about an authentic problem that is on the ground, that is present and ever present in the lives of many children who can't help themselves.”