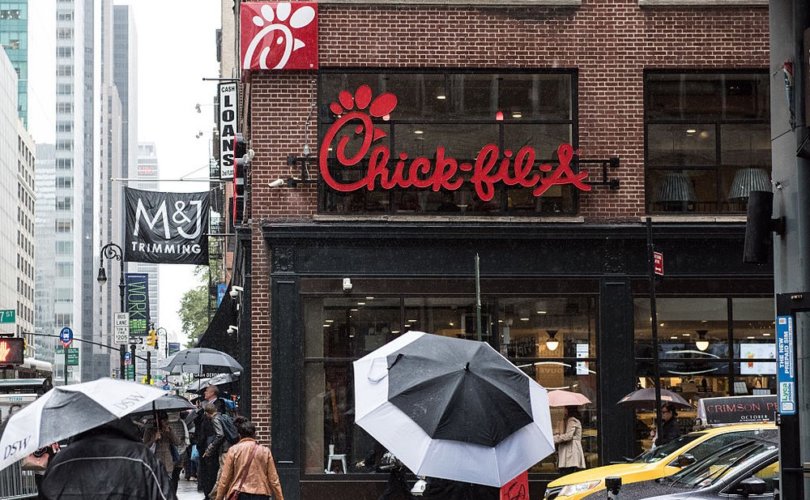 ORLANDO, June 14, 2016 (LifeSiteNews) – They don't usually work on Sunday, but just this once, Chick-fil-A served up its famous filets and iced tea on the Lord's Day.

The chain's owners, the Cathy family, are outspoken Christians and have maintained an official policy of never opening their stores on a Sunday since they went into business in 1946.

Why is this day different from all other Sundays?

The Chick-fil-A in Orlando, Florida, called its workers in to provide food to anyone who took part in a blood drive after the terrorist attack inside a gay nightclub that left dozens of patrons dead and 53 people injured.

“While we have a corporate policy that firmly states we are closed for business on Sundays, there have been rare cases that move our local operators to respond with food donations to help communities in need. The events in Orlando stirred our local restaurant owners and their teams to band together to provide nourishment to first responders as well as volunteers who donated blood,” a spokeswoman for Chick-fil-A told The Huffington Post.

Chick-fil-A locations around the country have held blood drives as part of their regular community service. The Chick-fil-A store in Hurst, Texas, has held a “Be the Match” event for three years, encouraging people to become blood and bone marrow donors.

However, the family's support for what CEO Dan Cathy called “the Biblical definition of the family unit” has made it the target of backlash across the nation.

Numerous cities and their leaders have said, Christian values or no, they don't want the stores in their cities.

New York Mayor Bill de Blasio groused last month that, while the store has “a legal right” to serve chicken in the Big Apple, he would urge a boycott of their stores.

Boston Mayor Tom Menino said he wished the chain should not be allowed to operate in Beantown.

The student government of Johns Hopkins University appealed to the university to ban the chain from campus.

There is no word as to how many sandwiches Chick-fil-A distributed in Orlando this Sunday, but area blood banks told local media they had not seen an outpouring of support like that since 9/11. At one time, an estimated 600 to 700 people stood in line at one blood bank alone.

“We do not think this requires any recognition,” the Chick-fil-A spokeswoman said of the Orlando drive. “It is the least we can do in this community we love.”