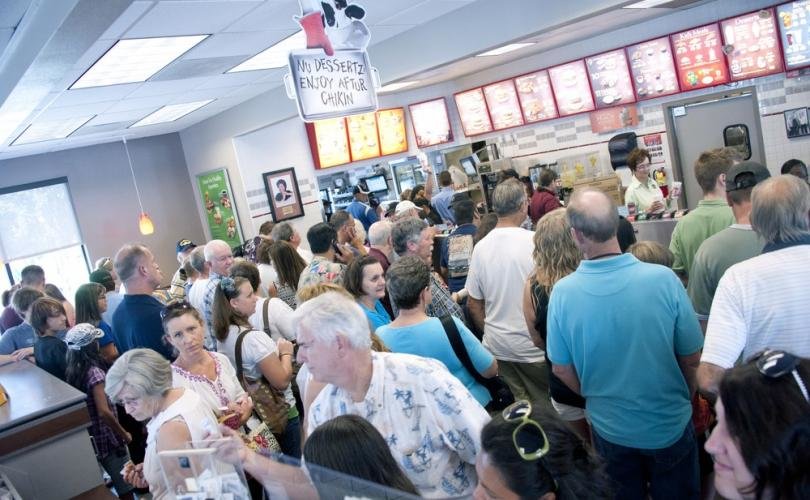 September 19, 2019 (LifeSiteNews) – Persistent cries of “homophobia” have done little to prevent Chick-fil-A’s rise among the fast-food ranks, and recently-highlighted data show the Christian chain’s business is making twice the money it was when the LGBT attacks first started.

Chick-fil-A enjoys tremendous success and an overwhelmingly positive reputation due to its service as well as its charitable bent and volunteerism during tragedies and disasters. Furthermore, for all the “anti-LGBT” branding, many homosexual employees and customers have attested to positive, welcoming experiences with Chick-fil-A.

Nation’s Restaurant News (NRN) ranked Chick-fil-A as the nation’s third largest restaurant chain in July, and an analysis by Restaurant Business shows the company’s system sales steadily climbing from $4.6 billion in 2012 (the year Cathy’s position on same-sex “marriage” went public) to more than twice that amount in 2018 at $10.5 billion – potentially indicating that part of the chain’s success stems from Christian and conservative Americans’ desire to reward the chain for its values and rebuke its attackers.

“Can they reach $30 billion? I think that's also a realistic goal if you give them enough time. And that should put them ahead of Starbucks,” Kalinowski Equity Research founder Mark Kalinowski said.

“The only ones who seem to have any kind of beef with the wildly popular chicken restaurant are a minivan-size group of squeaky extremists on the far left,” Focus on the Family’s Glenn Stanton told Christian Headlines. “They’ve concluded that Chick-fil-A is bigoted without the slightest bit of evidence – only that their founders believe in natural marriage. Their position sits very well with the rest of us.”

“Not only have they doubled their sales in the last few years, but they have won the prize for the fast-food establishment with the highest customer service rating the last four years running,” he added. “Bigoted businesses do not tend to rate well in customer satisfaction.”

The numbers come as left-wing activists seek to pressure Purdue University to bar Chick-fil-A from opening a location on campus, demands the administration has so far rejected. In July, Texas Republican Gov. Greg Abbott signed a law barring the state or local governments from acting against businesses on the basis of the owners’ religious beliefs, dubbed the “Save Chick-fil-A Bill” because it passed partly as a response to the San Antonio City Council excluding the food chain from San Antonio International Airport over the owners’ Christian view of marriage and sexuality.