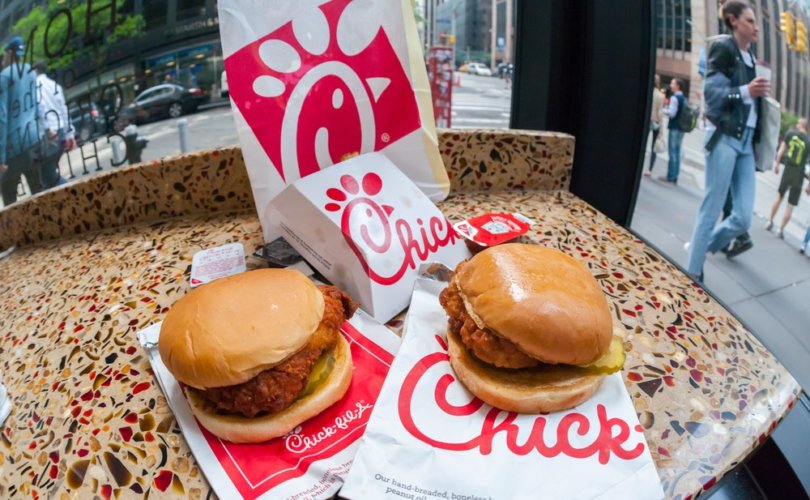 When Chick-fil-A revealed that it would stop donating to The Salvation Army and the Fellowship of Christian Athletes – groups that LGBT activists have for years deemed to be “anti-gay” for their Christian stances on certain issues – the move was interpreted by many observers and faithful patrons as knuckling under to pressure from LGBT political forces.

The restaurant that had earned hero status among Christians because of its courage in standing up to the homosexual juggernaut was suddenly seen as having betrayed millions of its loyal customers.

Chick-fil-A’s announcement was followed by the revelation it had donated in 2017 to the far-left, anti-Christian Southern Poverty Law Center (SPLC). It was a “hate map” produced by the SPLC that inspired domestic terrorist Floyd Lee Corkins II to attempt a mass shooting at the pro-life Family Research Council (FRC) in 2012. He was stopped by the security guard he shot.

Corkins had with him a backpack of Chick-fil-A sandwiches. He said he’d planned to smear them on the corpses of FRC employees.

“As you have seen, recently we announced changes to our giving strategy at the Chick-fil-A Foundation,” wrote Cathy in his December 5, 2019 response. “These changes were made to better focus on hunger, homelessness and education. We understand how some thought we were abandoning our long-standing support of faith-based organizations.”

“Some also questioned if our commitment to our Corporate Purpose was waning. Let me state unequivocally: It is not,” he added.

Wildmon said that Cathy’s response “was a welcomed clarification.”

“It appears that Mr. Cathy understands how many evangelicals perceived the company's decision, as he stated that these Christian groups were ‘inadvertently discredited,’” said Wildmon. “The fact that Dan Cathy called these two Christian groups ‘outstanding organizations’ will mean a lot to evangelicals.”

However, I also mentioned in my initial letter that Chick-fil-A stated that the company would support Covenant House, a ministry to homeless youth, including homosexual young people. While it is admirable to help hurting youth in desperate circumstances –– including those who are LGBTQ –– Covenant House also openly promotes homosexuality as normal, natural, and healthy. This was evident in Covenant House's participation in the NYC gay pride parade and a number of other efforts that make it clear the ministry does not hold to a biblical view of human sexuality.

“As a result, AFA will continue to monitor Chick-fil-A's corporate giving, at least for the foreseeable future,” continued Wildmon. “We believe our supporters rely on us to do so.”

Covenant House, which is ostensibly Catholic, has supported one of the most controversial recent developments in LGBT activism: Drag Queen Story Hour. The movement’s New York City page lists Covenant House New York as having provided “community space” to host events in which adult crossdressers read to children about “intersectionality” and “learn[ing] to see beyond the pink and blue gender binary,” according to the organization’s own website.

More than 116,000 concerned individuals had signed an AFA petition in November, joining with Wildmon in asking Chick-fil-A to clarify the organization’s attitude toward The Salvation Army and the Fellowship of Christian Athletes.

Elsewhere in his letter to Wildmon, Cathy promised, “Chick-fil-A will give to faith-based and other organizations that we believe to be highly effective in a particular area.”

“Grant recipients will likely rotate, as we assess from year to year partners who help us meet our stated goals,” continued Cathy. “Also, our Operators in your community will continue to invest in local causes that are meaningful at their discretion. Additionally, our family will continue to fund and operate our family foundations and give to other charities of our choice. We have been entrusted with much to share and the needs are great.”

“We understand Chick-fil-A can support whatever groups it wants but we wanted to protect the reputation of FCA and the Salvation Army,” Ed Vitagliano, an AFA executive vice president, told OneNewsNow.

Over 43,000 people have signed a LifeSiteNews petition asking Chick-fil-A to reverse course.