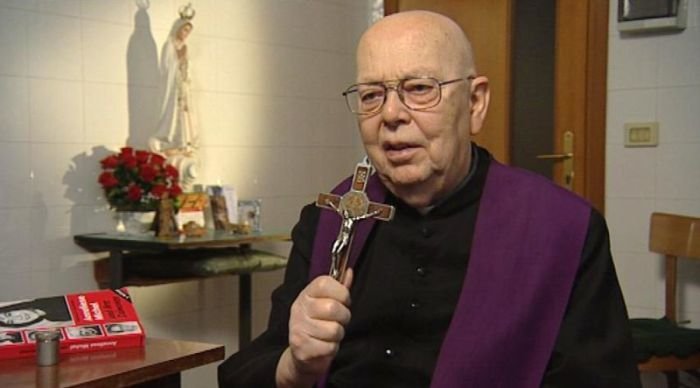 ROME, September 21, 2016 (LifeSiteNews) — Fr. Gabriel Amorth, the chief exorcist of Rome and herald of the fight against spiritualism and secularization of culture, died Friday, September 16, in Rome at age 91.

Fr. Amorth, probably the most well-known exorcist in the world, was born in Modena, northern Italy, on May 1, 1925, and ordained to the priesthood in 1954. In 1986, he officially became an exorcist under the tutelage of Candido Amantini, the former chief exorcist of Rome whom he would later succeed. In 1990, Amorth founded the International Association of Exorcists of which he was president until 2000 when he retired. In his 30 years of service as exorcist, he performed tens of thousands of exorcisms.

Amorth published countless books in Italian in which he was never afraid to topple prejudices against exorcisms or de-mask modern tendencies toward spiritualism, occultism, and demonic affinities as opening the door for the devil.

Among the famous statements of Amorth during his term as chief exorcist was his expressed conviction in 2006 that senior officials of the Nazi Party were actively involved in Satanism – a claim that has hitherto been demonstrated by historical research – and that both Adolf Hitler and Joseph Stalin were possessed. He also openly stated that the devil is not restrained within the Vatican walls: Amorth attributed the assassination attempt to St. John Paul II in 1981 by Ali Agca to demonic influences.

And the devil is not only active among leaders of society but in general culture as well. “People have lost the faith, and superstition, magic, Satanism, or Ouija boards have taken its place, which then open all the doors to the presence of demons,” he explained in an interview in 2006.

In an interview with LifeSiteNews in 2015, he condemned the martyrdom of Christians in the Middle East while pointing toward Our Lady for recourse. He topped off his remarks by saying in a Facebook post the same year that ISIS is Satan: “Evil is disguised in various ways: political, religious, cultural, and it has one source of inspiration: the devil. As a Christian, I fight the beast spiritually.” The secularization and degeneration of morality in the West, he claimed, were signs of the end of time. “Without the Lord, progress too is misused. We see it in laws that go totally against nature such as divorce, abortion, ‘gay marriage’… we have forgotten God!”

The priest was also known was strong condemnation of attacks on life, the family, and morality. He told LifeSiteNews in the same interview: “Divorce has been a disaster; abortion has been a disaster. Each year, 50 million children are murdered by abortion. And euthanasia, the broken family, cohabitation … It is all destruction! The Lord gave us sex for a purpose and He also declared: ‘May no man divide what God has joined.’ Sexual fun is one thing; love is another. Today there is much talk of love, but there truly is none!”

Modern and popular cultures are permeated with spiritualistic and possibly demonic influences, he proclaimed, pointing to the “Harry Potter” novels by J.K. Rowling. He criticized how in the novels the author falsely makes a distinction between black and white magic (bad and good magic), which “does not exist because magic is always a turn to the devil. By reading ‘Harry Potter,’ a young child will be drawn into magic and from there it is a simple step to Satanism and the Devil,” he said. Such books are steppingstones to satanic concepts.

When invited to a film festival to introduce “The Rite,” the famous film about an exorcist that is based on true events, he also indicated yoga as a step to Satanism. He reasoned that because it leads to the practice of Hinduism, “and all eastern religions are based on the false belief in reincarnation,” then “practicing yoga is satanic; it leads to evil just like reading ‘Harry Potter.’”

Amorth never failed to preach hope to the Christian faced with the seemingly insurmountable challenges posed by modern society in the West. “Evil exists, but it is afraid of the Lord,” he used to say, stating that “faith and prayer, as well as the regular reception of the sacraments, is the best antidote to demonic influences.”

Every year, the Vatican gathers a wide range of experts and exorcists from all over the world to discuss demonic possession from a theological and scientific perspective. Their goal is to face the reality of demonic possession and prepare priests to be exorcists.  The course is called “Exorcism and Prayer of Liberation.” It is designed for priests and lay people who are interested in the study of demonic possessions. Last year’s conference ran in April at Rome’s Regina Apostolorum University and focused on the distinction of demonic possessions from psychosocial and mental conditions. The next course will take place May 8-13, 2017.

Pope Francis warns constantly against the influences of the devil. “The devil exists and we must fight against him,” he said in a homily last year.  And in February during his Mexico visit, he warned the crowd from a “dialogue with the devil.”

No official successor for the office of Rome’s chief exorcist has been nominated yet.

Fr. Gabriel Amorth, 91, was chief exorcist of Rome, author of An Exorcist Tells His Story and An Exorcist: More Stories. He founded and led the International Association of Exorcists. He has performed thousands of exorcisms in more than 30 years in that capacity. Fr. Amorth addresses the Synod on the Family among other issues.