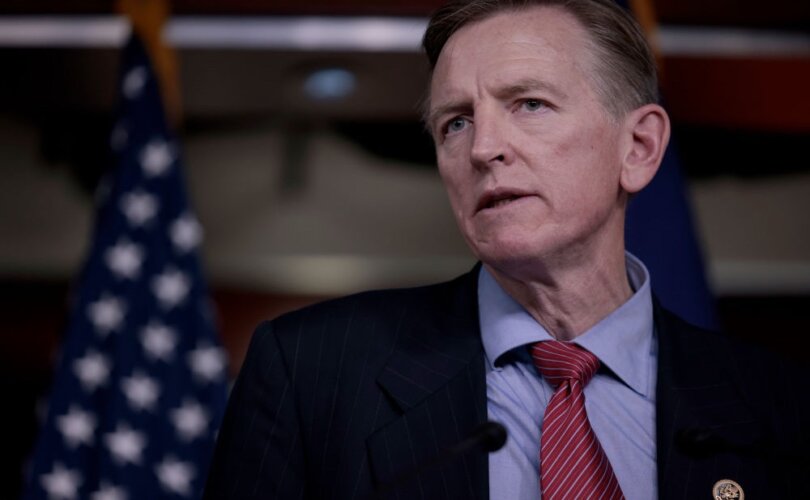 Gosar, who has represented Arizona’s fourth district since 2013 and is currently running for reelection, made the remarks in an October 21 letter addressed to NIH Acting Director Dr. Lawrence A. Tabak, D.D.S., Ph.D., and Dr. Karen Parker, Ph.D., M.S.W., who heads up the NIH’s Sexual & Gender Minority Research Office (SGMRO).

Noting that the SGMRO is slated to conduct a workshop to “identify and prioritize key infrastructure and research” to support “gender affirming care for transgender and gender diverse population,” Gosar urged the officials to look into existing research that he said debunks theories about the beneficial effects of surgical and pharmaceutical gender interventions.

Our children are the very future of our civilization, and they must be protected at all costs.

Here is my letter to the NIH opposing the use of tax money to sexually mutilate and castrate children. pic.twitter.com/nBTg5aEgyQ

“Gender-affirming care (GAC) includes the use of puberty blockers and cross-sex hormones that can lead to infertility and other serious permanent medical maladies,” Gosar wrote in the letter, adding that the “removal of sexual organs,” which “is also considered GAC … is obviously irreversible.”

“That any of these surgeries and treatments are being provided to minors is nothing short of child abuse,” he argued.

Gosar pointed out that Lupron, a popular drug used as an off-label puberty blocker, can cause a range of serious side effects, including heart attacks, osteoporosis, cracking teeth, and difficulty speaking, according to research conducted by endocrine specialist Chandler Marrs.

The Arizona Republican also blasted claims that transgender surgeries and hormone treatments improve the mental health of recipients, citing a 2011 Swedish cohort study that found “persons with transsexualism, after sex reassignment, have considerably higher risks for mortality, suicidal behavior, and psychiatric morbidity than the general population.”

Gosar also referenced a “heavily cited 2019 study” by Richard Bränström Ph.D. and John E. Pachankis, Ph.D. that appeared to support the theory that “GAC” improves mental health but was later retracted. A 2020 correction to the study found the “results demonstrated no advantage of surgery in relation to subsequent mood or anxiety disorder-related health care visits or prescriptions or hospitalizations following suicide attempts in that comparison.”

The study’s authors later admitted that their “conclusion based on the findings at hand in the article, which used neither a prospective cohort design nor a randomized controlled trial design, was too strong.”

In light of the lack of scientific backing for transgender surgeries and hormone treatments, Rep. Gosar called on the NIH to investigate evidence that psychological counseling instead of surgery or pharmaceuticals should be used to treat gender dysphoria.

Explaining that he is “not persuaded that the medical profession should indulge temporary psychological gender confusion with physical, permanent, and irreversible surgical and drug treatment,” Gosar argued that “[r]esponsible health care would recognize the severe psychological distress transgendered people are suffering and address it with psychological treatment.”

According to the Arizona representative, surgical and pharmaceutical intervention “not only ignores the mental health issues at stake but reinforces them.”

Gosar concluded his letter by calling on the NIH to do “a deep dive” to investigate “the negative side effects of drugs and surgeries used in GAC” in order to address “the physical and mental health of people suffering from gender dysphoria.”

RELATED: Most children who experience gender dysphoria eventually grow out of it, celebrity kids are proof

Gender clinics across the U.S. have policies permitting the prescription of puberty-blocking drugs and performance of certain surgical interventions for adolescents, leading to spiking rates of medical mutilation for minors.

The World Professional Association for Transgender Health (WPATH), upon which many hospitals and clinics rely for guidance on transgender treatments, recently updated its recommendations on minimum ages for transgender surgeries and hormones.

The new guidance suggests dropping the minimum age for cross-sex hormones from 16 to 14, and suggested that some breast and genital surgeries may be done on 15- or 17-year-olds.

Revelations regarding ongoing transgender medical interventions for minors have generated outrage among opponents and spurred a thriving political movement to protect children against chemical castration and physical mutilation.