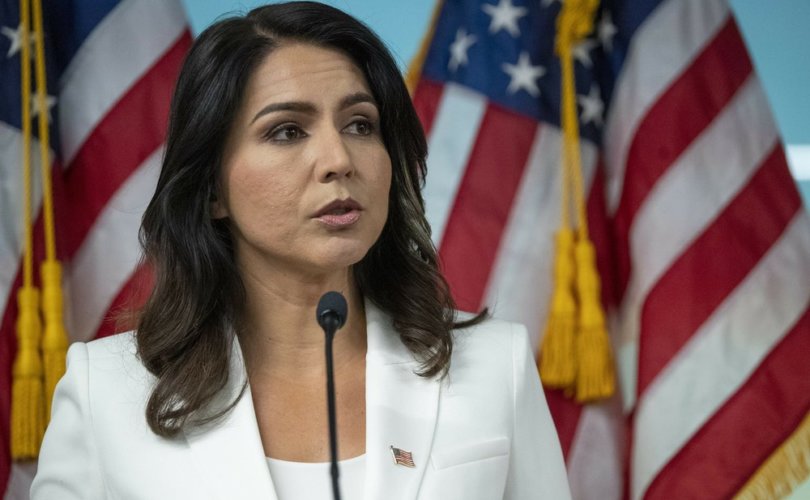 (LifeSiteNews) – Former 2020 presidential candidate and Democrat Rep. Tulsi Gabbard of Hawaii stated in a video posted to Twitter Sunday that the Biden administration’s promotion of puberty blockers for children is a form of child abuse, following a warning released by the U.S. Food and Drug Administration (FDA) last month stating that puberty blockers could have serious side effects.

“The FDA made a disturbing, but not at all surprising announcement just a few days ago about children’s health,” Gabbard began.

Puberty-blocking procedures promoted by the Biden/Harris Admin are child abuse. The FDA has just confirmed these hormones/drugs have extremely dangerous side effects, like brain swelling and vision loss. pic.twitter.com/NqYZYjieWU

“Now, if you haven’t heard about it, or, if you missed it, it is because the mainstream media and the Biden-Harris administration have been completely silent on it, and this warning that the FDA issued was basically saying that puberty blockers can cause serious health risks for our kids,” she continued. “Unfortunately, at almost the exact same time the FDA issued this warning, Biden-Harris administration officials were making public statements actively promoting the use of puberty blockers and irreversible surgeries for kids.”

Last month, the FDA released a report that said that puberty blockers could lead to pseudotumor cerebri, a condition that mimics a brain tumor caused by elevated spinal fluid pressure on the brain. The agency began investigating puberty blockers after AbbVie, the company that markets Lupron, found several publications that identified the condition in girls taking the drug that had early-onset puberty, an FDA spokesperson said.

The report was released shortly before Assistant Health Secretary Richard “Rachel” Levine, a gender-confused man, endorsed the use of puberty blockers in children during an interview for MSNBC.

When asked for an opinion on states barring gender-confused men from women’s sports, Levine said “we really want to base our treatment and affirm and to support and empower these youth, not to limit their participation activities in sports and even limit their ability to get gender-affirmation treatment in their state.”

When people are aware of the science they see how important it is to have rational policies. New study shows that 54% of Floridians support access to gender-affirming healthcare for minors when its recommended by their doctors or supported by their parents https://t.co/RaduG0wtWU

Puberty-blocking drugs like Supprelin LA and Lupron are linked to serious, permanent side effects, such as osteoporosis, cognitive impairment, and sterility. Republicans recently proposed several bills to protect children from irreversible gender transition operations and drugs.