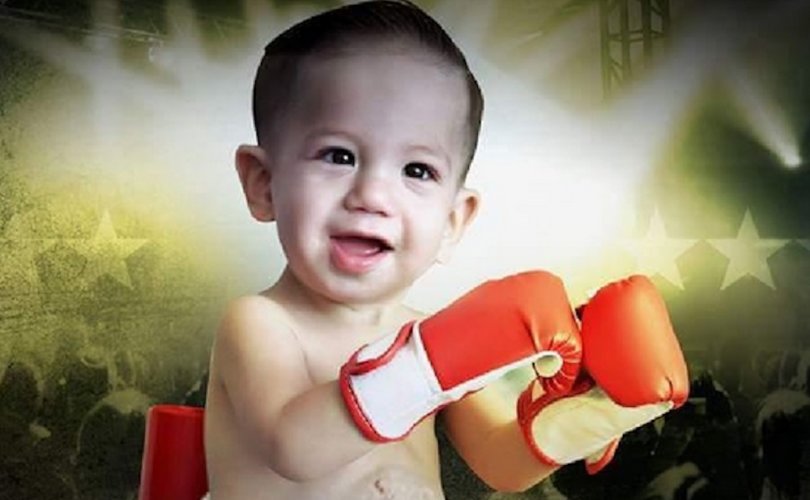 LAS VEGAS, Nevada, October 4, 2016 (LifeSiteNews) – A child born with a “universally fatal” condition just celebrated his first birthday and his parents are calling him a miracle who has brought them closer to God.

“I never used to believe in hope or in God,” Desteny Amaya said of her son, Ezekiel Conseco. “When I prayed for him, it was my first time praying.”

Ezekiel was born with a rare defect called Pentalogy of Cantrell that can affect the diaphragm, abdominal wall, pericardium, lower sternum and the heart. In Ezekiel’s case, his heart developed outside of his body.

“They thought he wasn’t going to make it,” Amaya said in a report from 3 News Las Vegas. “So to me, he’s my miracle.”

Dr. Van Bohman, a Las Vegas perinatologist, had only seen the condition six times in 30 years of practice.

“Almost universally it's fatal,” Bohman told the news station in February when Ezekiel was five months old. “These kids never survive, in fact this is the only one I've ever seen that has survived.”

Despite the likelihood of more medical treatment down the road, Ezekiel should be able to grow up, hold a job, become a father and have a rewarding life, Bohman said.

Bohman also helped Amaya understand that it was OK for her to want to give her child a chance.

“I was thinking, ‘Am I being selfish for me to want him to be born for him to go through all this?’” she said at the time. “But then I talked to Dr. Bohman and he explained to me it's not selfish wanting your baby to be here.”

So while Ezekiel wasn’t supposed to make it, he was saved by several surgeries, and not only has he survived, the boy has thrived.

His parents threw him a boxing-themed first birthday party this past weekend, with lots of presents, a cake almost the same size as him, and joyful guests all around.

Doctors attribute Ezekiel’s survival to pre-planning while he grew in his mother’s womb, along with the operations that began after his delivery by C-section and have continued during his young life, with more to come.

The case exemplifies how an adverse prenatal diagnosis does not have to mean despair or abortion, the latter often encouraged and pushed for by doctors.

In most accounts of health difficulties, the children have still given their parents untold joy, such as former U.S. Senator Rick Santorum and wife Karen’s daughter Bella, who has survived and thrived for eight years with Trisomy 18.

There are examples as well where the children have achieved great accomplishments, most recently the case of Eliza McIntosh, whose parents were told she would have no quality of life and therefore they should abort her. McIntosh has gone on to compete in the U.S. Paralympics, breaking a Guinness world record, and this past August she was crowned Ms. Wheelchair America.

Even when the child does not survive an adverse prenatal diagnosis, parents who choose life still say it is well worth being open to life.

A UK couple whose son was diagnosed in 2014 in utero with ectopia cordis, another rare condition that can result in circumstances with the heart similar to Ezekiel Conseco’s, was advised to abort and instead chose life, fighting for him throughout the pregnancy.

Dennis and Samantha Kerr recognized that the value of their son, Gabriel, whose name means miracle, was not tied to his health or chance of survival, and they cherished him for the few hours they had him after birth in March 2015.

“We spent four precious hours with Gabriel before he passed. It was almost like he felt his time was running out and wanted to meet us,” Samantha Kerr said in a Kent Online report. “We celebrate him and the time we had. We are so amazed to have been given such a precious gift.”

Ezekiel’s father, David Conseco, had a message for other parents facing a difficult prenatal diagnosis, and that was to never give up.

“For everybody that has a baby with a tough situation, it’ll turn out good,” Conseco said. “God has something for you.”