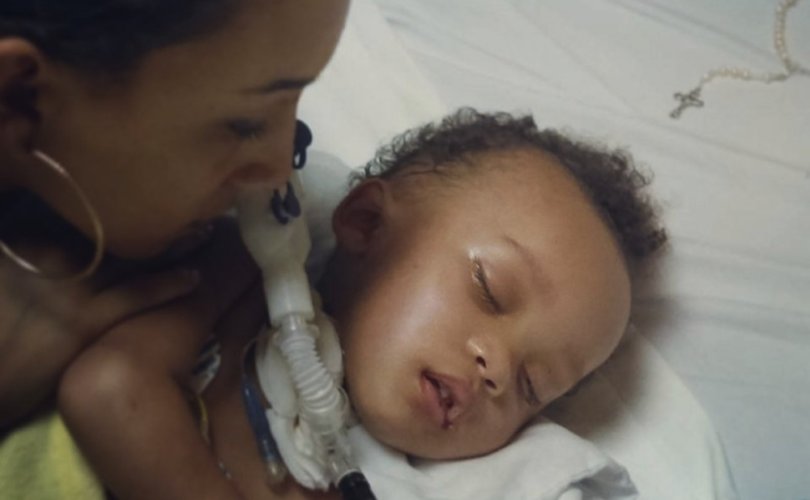 LOS ANGELES, California, August 26, 2016 (LifeSiteNews) — After months of going to extraordinary lengths to fight for their child’s life, a California family lost their young son after his life support was pulled.

Israel Stinson died Thursday when Children’s Hospital Los Angeles removed him from life support after a Los Angeles Superior Court judge dissolved the latest restraining order keeping him alive. The family was in the process of filing a court appeal, but the hospital took the two-year-old  off life support anyway.

The recent handing of Israel’s care and the shocking way in which his life ended was bizarre and awful, an attorney for his family told LifeSiteNews.

Alexandra Snyder, executive director for the Life Legal Defense Foundation (LLDF), said it became increasingly clear during the few short weeks Israel was at the hospital where he came for treatment that the intent all along was to disconnect him from his life support. Not only did the hospital pull Israel’s life support against the family’s wishes while they were in the midst of filing an appeal, his mother and father were told to leave their son’s side in the hospital upon his death.

“As soon as it happened, they told the parents to leave, to get out of the hospital,” Snyder told LifeSiteNews, “which means they could not properly say goodbye to their son. It was just horrendous.”

“There’s got to be a better way to do this,” she said.

Israel came to Children’s Hospital Los Angeles the first week of August after spending the previous two-plus months in a Guatemala hospital, airlifted there in late May to avoid withdrawal of his life support at Kaiser Permanente Hospital in Sacramento, California, which was near his home and had declared him “brain dead.”

The family fought the Kaiser facility for weeks to keep their son alive while searching for long-term care elsewhere after he suffered a severe asthma attack in early April that resulted in cardiac arrest and brain injury. Israel’s family maintained throughout that he was showing signs of responsiveness, and an outside specialist’s findings disputed the Kaiser brain death diagnosis, yet Kaiser persisted in seeking withdrawal of Israel’s life support.

Israel did very well in the Guatemala hospital, Snyder said, and defied the Kaiser diagnosis with his improvement.

As one example, she said, Kaiser’s contention that the toddler could not process nutrition was “complete baloney,” because he was able to do so at the other hospital, and his EEGs there showed brain activity.

“They did everything in their power to help him,” she said. “It was amazing.”

Snyder wasn’t directly involved in arranging Israel’s transfer back to the United States and Children’s Hospital Los Angeles. That was done through a family member, but she said doctors at both facilities communicated throughout the process, meaning the LA hospital was fully aware of Israel’s improvement and agreed to take him while knowing the family’s intent to procure him long-term care.

Instead, roughly 10 days after his arrival at the Los Angeles facility, his parents were in court having to secure an August 18 restraining order enjoining the hospital from pulling Israel’s life support just two hours before it was set to happen.

Snyder said the LA hospital would not consider the Guatemala facility’s brain activity test and did not conduct one of its own, instead using Israel’s Kaiser test from April to validate its action, signaling to Snyder that something was amiss all along. A lot had happened in the way of Israel’s improvement in the five months since he became ill, she said, but the hospital refused to consider it.

“I’m baffled why they would take him when that was their intention from the beginning,” Snyder said. “Why would a hospital with no obligation to take him agree to take him and give these parents hope, with the singular intention of ending his life?”

This was further underscored by the fact that while the family was asking for an independent brain activity test to be done, the hospital rushed an ex parte motion to remove Israel’s life support as soon as possible instead of the September 9 end date of the restraining order, leading to Thursday’s hearing and Israel’s subsequent death.

“They really expedited things today (Thursday) to make sure that the test did not take place,” Snyder stated. “I don’t understand the action of the hospital because it appears they agreed to take him, to make sure he never left the hospital.”

“They were on a mission to make this happen,” she continued, acting swiftly to end the toddler’s life while there was pending legal action.

Not once did Israel’s parents get a chance to discuss their son’s condition with a physician whom they trusted, she said.

Snyder called the hospital futilely asking for Israel’s parents to have more time with him after he died. The hospital was so intent on getting this done, she said, that there had been no discussion with Israel’s parents about how to handle his remains.

Patients who have been declared brain dead have recovered on numerous occasions, and Israel’s family was trying to get him to a facility where he’d have time and a chance.

They focused on New Jersey, where state law does not recognize a “brain death” declaration in situations where the family members believe that life continues until the patient’s heart stops beating, though they would have taken him anywhere that would have allowed him time to get well.

Snyder told LifeSiteNews that Israel’s case is a tragic illustration how the controversial concept of legal brain death is especially contentious in California, where laws defining when someone is declared “brain dead” are more permissive than other states.

“This whole case shows that it’s not as clear as they say it is,” she said, “or as they want it to be.”

INTERVIEW: Parents ‘won’t give up’ fight for 2-year-old son on life support