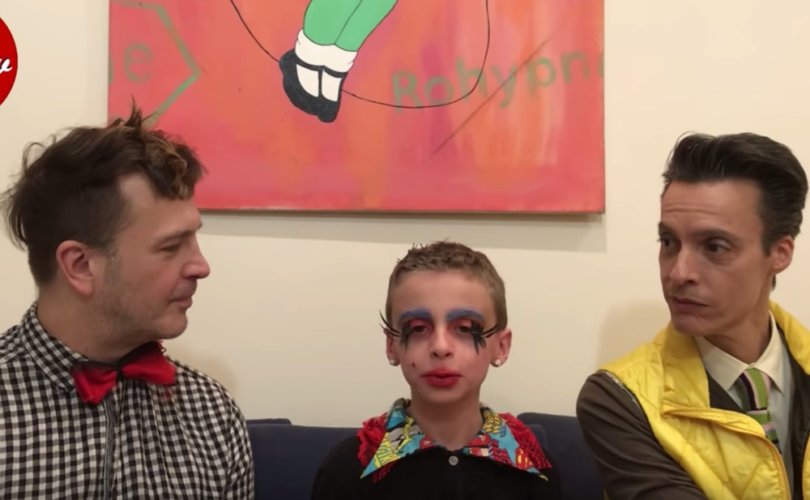 NEW YORK, New York, December 20, 2018 (LifeSiteNews) – Concerns for the welfare of a child “drag” performer are increasing as new information and videos about his involvement with a very adult world come to light.

Desmond Napoles, 11, has been celebrated in national media for emulating the female impersonators, or “drag queens,” he sees on television. His many fans have applauded him for his choice of clothing, wigs, and make-up, seeing him as a champion of “being yourself, always.”

Last week conservative media published concerns for the boy when photographs and video footage of Desmond – or, to use his stage name, “Desmond is Amazing” – dancing on stage at nightclubs in New York and San Francisco went viral. In both venues, Desmond was showered with money as he did an awkward impersonation of singer Gwen Stefani. In the footage of his San Francisco appearance, Desmond rips off his dress to reveal his midriff-baring top as adult men hoot their appreciation.

This week commentators have found more evidence that Desmond, who has autism, may need protection from his parents’ choices. Last December, the child appeared on a YouTube talk show hosted by Michael Alig, a 1990s New York dance club personality who spent almost 17 years in prison for manslaughter after the violent death and dismemberment of a drug dealer named Andre Melendez.

“What I do is very inspired by what you guys do,” Desmond told the men, who referred to the boy as “the world’s youngest Club Kid.”

The men joked that they felt excluded from Desmond and his mother’s planned “Haus of Amazing,” a club for “drag kids,” because it is meant for children and teens. The Desmond is Amazing web page lists other projects that the child is purportedly organizing.

Is Desmond his mother’s ‘cash cow’?

Meanwhile social media messages posted by the child’s mother Wendy Napoles and GoFundMe accounts launched on her behalf suggest that the family is barely scraping by, and that Desmond may be the family breadwinner.

“Unless something has changed fairly recently, Wendy is unemployed. Last Christmas, some friends did a Go Fund Me for her and the boy…. If she was so broke as recently as one year ago that she had to turn to Go Fund Me, it seems fair and even necessary to ask: is her 11-year-old son Desmond her cash cow?”

Dreher posted a screenshot of a second GoFundMe account opened for the family this August. The family friend wrote, “Desmond’s star continues to climb, but what little income is generated through his work does not cover basic living expenses for them [his family] – at least not yet.”

“Both parents remain unemployed,” the friend wrote. “Desi’s father continues to look for work, as does his mom, although she is consumed more and more with managing Desi’s schedule. They are in the process of trying to secure rent assistance from the City, but the red tape is overwhelming. In the meantime their landlord has begun eviction proceedings against them for back rent.”

The friend complained that “haters” have on several occasions sent Child Protective Services to check up on Desmond, which he believes to be a “waste of valuable resources.” Apparently CPS had found nothing wrong in how Desmond was being raised.

“Why are these able-bodied people unemployed?” Dreher asked. “Who paid for [Desmond’s] expensively designed website? For Desmond’s lavish costumes?”

While saying he doesn’t believe the parents are forcing the child to do what he does not want to do, Dreher declared that they are “clearly exploiting him.”

The Kid and the Ketamine

During an “ad break” for Alig’s art business during his interview with Desmond, a colorful keychain showing a painting of a bottle of ketamine was featured twice. Ketamine, or “Special K,”  is a recreational “club” or “party” drug commonly used amongst clubgoers in the homosexual and transgender lifestyle. It causes disinhibition, risk-taking behavior, and apparently heightened sexual arousal. Heath providers blame such party drugs for increased rates of sexually transmitted diseases in urban LGBT communities.

Although only 11 years old, Desmond clearly illustrated an adult knowledge of what ketamine is in a livestream video he appears in with an adult drag queen (editor’s note: the video title incorrectly identifies Desmond as Lactatia, another child drag queen).

Reading live comments from strangers, Desmond and his friend react to the remark, “What has this world come to?”

“And people do ketamine on a couch,” says his friend.

In response, Desmond smiles and snorts an imaginary substance from his hand.