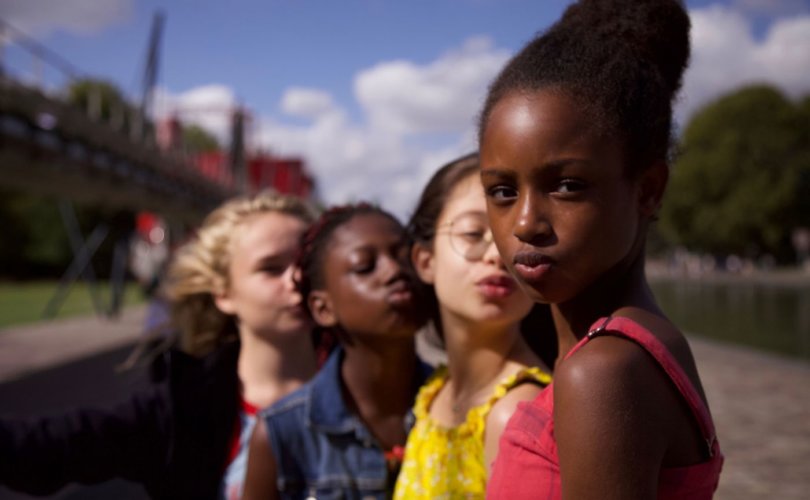 September 10, 2020 (LifeSiteNews) — Conservative commentators and social media users are calling for Netflix to be “cancelled” after a new film about girls as young as 11 performing sexualized dance acts went live on the platform.

Clips from the film released on social media have provoked increased outrage online, with many saying the film is promoting pedophila. Some are too disgusting and disturbing to describe or share in this article.

IMDb’s guide for parents for the film currently details that in one scene “A pair of tight leather pants on an 11 year old girl are forcefully pulled down in the midst of a scuffle; the camera glances at her underwear exposed bum.”

Screenshots posted online show that IMDb’s guide previously gave much greater detail about some of the disturbing aspects of the film and even noted that some of the content of the film “is lawfully defined as pedophilia.” An archived version of the IMDb website also shows their original guidance for parents.

“This is lawfully defined as pedophilia and can be extremely distressing to many viewers.”https://t.co/oO7cveIqhT https://t.co/fs1zBJWNcf

The text which previously appeared on IMDb’s website included the following:

that movie cuties dropped and wtf. this is straight from IMDB �� pic.twitter.com/y4RVyQ51ox

If you watch 11 year olds twerk, you’re a creep.

If you taught 11 year olds to touch themselves on camera, you’re abominable.

Conservative journalist and commentator Matt Walsh says that “Cuties” is a part of a “push to normalize pedophilia in our country.”

Netflix released that “Cuties” movie about twerking 11 year olds. Fuller clips of the film are now circulating. It’s way worse than I thought, and I thought it would be extremely bad. VERY explicit sexual dancing, girls grabbing themselves, crotch shots, etc. These are children.

There is a push to normalize pedophilia in our country. That’s not a conspiracy. It’s a fact.

Nevertheless mainstream media outlets have lauded the film, with The Telegraph awarding it four out of five stars and describing it as a “provocative powder-keg for an age terrified of child sexuality.”