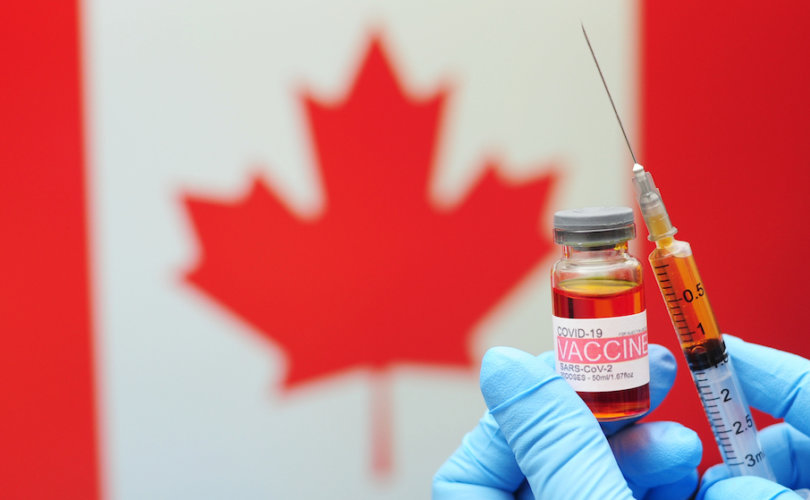 OTTAWA, Ontario (LifeSiteNews) – A six-year-old girl and an eight-year-old boy are among the more than 2,000 Canadian reports of fatal and potentially lethal heart disorders after COVID shots, according to Health Canada.

The majority of myocarditis/pericarditis reports (1,178) followed vaccination with Pfizer-BioNTech’s COVID-19 shots, which public health officials are strongly marketing to children as young as five years old.

At least one eight-year-old boy was among the 692 males diagnosed with myocarditis following Pfizer’s novel mRNA injection. The oldest male affected was 84 years old; the median age of males suffering heart inflammation after COVID shots was 24 years.

A six-year-old girl was among 438 reports of myocarditis following Pfizer’s shots in Canadian females; the median age was 40. (The sexes of two further case reports were listed as “other,” and sex was not specified in 46 cases).

Moderna’s mRNA Spikevax vaccine (approved for ages 12 and up) resulted in 641 reported cases of myocarditis/pericarditis. The Spikevax jab, according to Health Canada, poses a higher risk of the disease for all ages than Pfizer’s shots. Most cases (442) occurred in males ranging as young as 13 years old to 95, but with a median age of 27 years.

Women as young as 18 were affected with myocarditis following Spikevax injections, with the median age of diagnosis at 35 years.

While Health Canada maintains that symptoms of myocarditis “resolve quickly after seeking medical care,” and many public health statements dismiss the adverse event as being mostly “mild,” there are no long-term studies of the effects of vaccine-induced heart conditions, and previous studies indicate that “myocarditis mostly does not sufficiently respond to symptomatic medication for heart failure, and mortality is high in spite of treatment.” Active myocarditis has a 25 percent to 56 percent mortality rate within three to ten years, according to a published review paper on the subject.

“Data in Canada now indicate a higher number of cases in younger people (less than 40 years of age) than would normally be expected in this age group in the general population,” states Health Canada, though there is no clear instruction to vaccine administrators to warn youths of this documented danger.

Health Canada told LifeSiteNews by email that “unfortunately” no further data were available on how many Canadian children were affected by heart conditions following COVID shots.

In the U.S., at least 4,559 cardiac-related deaths are among adverse events reported to the Vaccine Adverse Event Reporting System (VAERS), including 21 deaths of children aged six to 17 years old. Reported deaths include the collapse of a child on a soccer field before dying, a 17-year-old dying suddenly, and a 12-year-old boy found dead in October after a second dose of Pfizer.

One report describes an eight-year-old from Wyoming who was “totally healthy and active” prior to getting a first dose of Pfizer’s injection and was diagnosed with myocarditis and admitted to the ICU for treatment after getting a shot.

Another adverse event report filed from outside the U.S. describes a six-year-old who was hospitalized for eight days with myocarditis following a Pfizer injection.

An explosion in the number of athlete deaths and collapses on fields has been linked to myocarditis and the mandated vaccine.

The U.K.-based Daily Exposé observed that the number of professional soccer players who have died due to cardiovascular issues is doubling every three months, with the number of deaths occurring in December 2021 matching the annual average over the previous 12 years.

Deaths among professional soccer players in 2021 were four times higher than the average death rate recorded between 2009 and 2020, The Daily Exposé reported.

A number of sudden deaths of teenagers and adolescents, particularly among athletes, have been observed since COVID vaccines rolled out to youths in the summer of 2021.

Devonte Mumphrey, 15, also collapsed and died in Texas from a sudden cardiac arrest on the same day.

Tobiloba Taiwo, an 18-year-old student at the University of Minnesota, passed out February 21 at the university recreation center while playing basketball and died at the hospital.

A video series called Young Hearts presents montages of recent sudden collapses and deaths of athletes from cardiac issues since the vaccines rolled out.

ECGs to rule out heart damage

At least one pediatrician has noted the problem. Mariah Livesay Bennett snapped a photo last week at Jackson River Pediatrics in Covington, Virginia of a notice on a window directed at “student athletes.”

“Sports physicals are done primarily to make sure you are not at high risk for sudden cardiac death on the playing field. COVID vaccination affects your risk,” the notice states.

“In response to worldwide experience and vaccine adverse-event monitoring, we are adopting a more precautionary sports physical sign-off policy: If you have received doses of any COVID shot, we will not be able to clear you to compete in sports without completing lab work and possibly an echocardiogram to rule out potential heart damage.”

A study published in the Journal of the American Medical Association in January reported that Pfizer’s COVID-19 shot is associated with a 133-times greater risk of heart inflammation for teenage boys.

Health Canada’s website states that myocarditis first “emerged” in Israel and the United States following COVID vaccination in May 2021. Data from Pfizer that the pharmaceutical giant was forced by court order to begin turning over in November 2021, however, reveal that the company was aware of serious cardiac events including myocarditis as early as February 2021, three months before Health Canada says it “emerged.”

Up to February 28, 2021, Pfizer had received 42,086 adverse event reports (in the first 10 weeks of its rollout), including 1,403 reports of “cardiovascular” adverse events, including two affecting one child and one adolescent. These events included 32 pericarditis events and 25 myocarditis reports.

Asked whether it had access to Pfizer’s data, Health Canada replied by email to LifeSiteNews that it could not answer the question, but stated that Health Canada “reassures Canadians that COVID-19 vaccines continue to be safe and effective at protecting them against COVID-19.”

The U.S. Centers for Disease Control and Prevention (CDC) has also acknowledged a higher-than-expected rate of myocarditis/pericarditis among vaccinated children and youths, but also continues to recommend the vaccine to children as young as five.