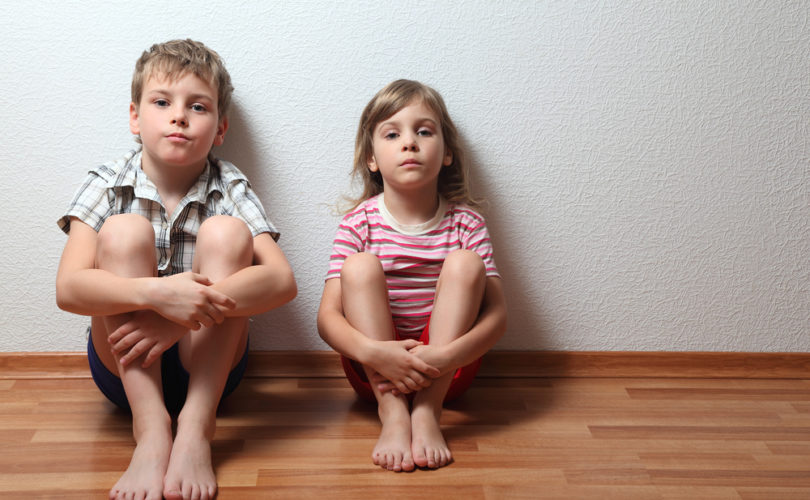 The number of young children – some as young as three – being referred to the UK's National Health Service for transgender treatments has quadrupled in the last six years.Shutterstock

LONDON, April 8, 2015 (www.LifeSiteNews.com) – The number of young children – some as young as three – being referred to the UK's National Health Service for transgender treatments has quadrupled in the last six years, according to the Tavistock and Portman Trust, a NHS center that specializes in gender issues for children under 18.

The mental health clinic reported that 77 children under 11 years old had been referred to its Gender Identity Development Service in 2014. Of those, 20 were only three or four years old.

A spokesperson for Tavistock and Portman Trust said that while gender dysphoria in children is a “complex and rare condition” which is “frequently associated with distress which may increase at puberty…there is not one straightforward explanation for the increase in referrals.”

He added that “it's important to note that gender expression is diversifying, which makes it all the more important that young people have the opportunity to explore and develop their own path with the support of specialist services.”

Noting this trend, British media reported the story of eight-year-old “Jessica,” a biological boy, who told the BBC that he is so happy now that he can live as though he were a female. “I really didn't want to be a boy,” he said. “It was really frustrating for me. It feels like I'm in the wrong body.”

The boy's mother, who is in a lesbian relationship, was accused by a relative of “conditioning” her son to want to be female. She reportedly dismissed this claim as “absurd.”

However, not everyone is celebrating. Columnist and commentator Carole Malone wonders why health care money is being “wasted” on transgender treatments for three-year-olds who “can't decide whether he wants fish fingers or baked beans for tea.”

“How on earth would he know he was born in the wrong body?” she asked. “And how would such a young child be able to express that kind of emotion?”

She warned, in an editorial in the Mirror, that, “My fear in all this is that if a child is put into a state-funded 'transgender' monitoring system at three – they might never get out of it. They might never be able to – or be allowed to – think independently, and be steered into believing they're something they are not.”

In an article published earlier this year in Aleteia, Dr. Fitzgibbons said that “important medical and psychological issues need to be considered before the educational, medical, political and judicial systems rush headlong into a process of affirming in youth and in their parents a fixed false belief that a person can be a sex that is not consistent with their biological and genetic identity and that such individuals have the right to transgender surgery. Fixed false beliefs are identified in the mental health field as manifestations of a serious thinking disorder, specifically a delusion.”

“Today youth with gender confusion are being encouraged to consider sexual reassignment surgery without being warned of the severe risks associated with such surgery or being given informed consent about other treatment that could resolve their confusion,” he said.

“For example,” Dr. Fitzgibbons continued, “a 2011 follow up of SRS [sexual reassignment surgery] from Sweden demonstrated that persons after sex reassignment, have considerably higher risks for mortality, suicidal behavior, and psychiatric morbidity than the general population.”

Dr. Paul McHugh, the former chair of psychiatry at Johns Hopkins, wrote in the Wall Street Journal about finding such evidence in his research.

Dr. McHugh said, “Most shockingly, their suicide mortality rose almost 20-fold above the comparable non-transgender population. This disturbing result has as yet no explanation but probably reflects the growing sense of isolation reported by the aging transgendered after surgery. The high suicide rate certainly challenges the surgery prescription.”

McHugh observed that, “When children who reported transgender feelings were tracked without medical or surgical treatment at both Vanderbilt University and London's Portman Clinic, 70 to 80 percent of them spontaneously lost those feelings.”

Dr. Fitzgibbons also points to the dissemination of “gender theory” in the education system as a cause of the perceived increase in gender identity disorder (GID) in children and youth.

“Today,” Fitzgibbons wrote, “another important motivational factor related to transgender identity is the exposure of youth to gender theory in college, which can result in their embrace of postmodern philosophies focused on freedom as an end in itself.”

He said that such ideas came from sources including the writings of Friedrich Nietzsche and Jean-Paul Sartre.

“If freedom (some would call it license) is the greatest good in the world, then why should anyone be constrained by biology?” he asked. “One’s sex as male and female is seen not as a gift but as a constraint that must be overcome, so if technology can alter one’s body, then so be it.”

Dr. Fitzgibbons said that information about the serious medical and psychiatric issues associated with transgender treatments must be made available to youth who are confused about their gender.

“Pediatricians, mental health professionals, physicians, nurses and school counselors have a clear legal responsibility to do so and parents, family members, educators, politicians and clergy have a moral responsibility to protect youth,” Fitzgibbons concluded.