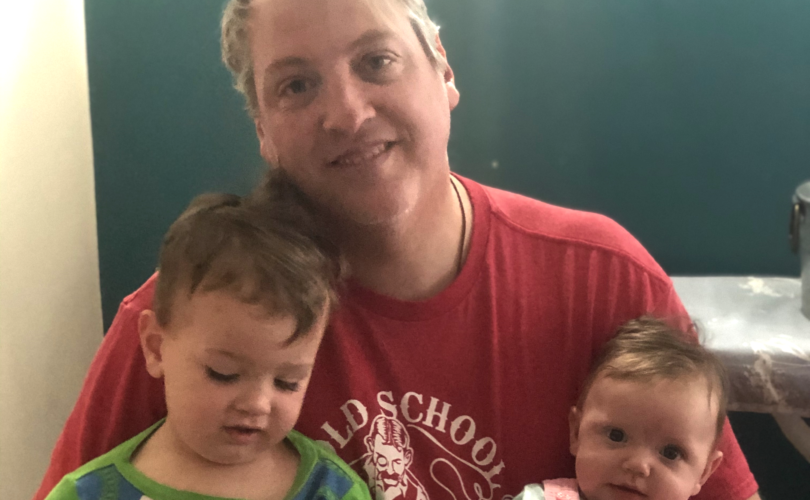 OTTSVILLE, Pennsylvania (LifeSiteNews) — The pro-abortion man who verbally assailed Mark Houck’s 12-year-old son last year, leading to a minor altercation that then triggered the FBI’s terrorist raid of the Houck home last Friday, is now the recipient of prayers from Catholic school children in the family’s local community.

Brian Middleton, a spokesman for the Houck family, shared a video with LifeSiteNews of students from The Regina Academy at St. John the Baptist, just five miles from the Houck family residence, praying for Mr. Bruce Love, who served as an “escort” for a Philadelphia abortion mill and was pushed by Mark last October when he aggressively entered the personal space of his son.

Titled “Love for Love” by Middleton, he said this video “shows how Catholics respond to those who persecute us. In these children, one can see Jesus.”

The 1:42 clip, taken this morning, shows a young early teen student leading the school in prayer for Mr. Love.

The young man begins by speaking of “our loving God who talks to us about praying for people who persecute us. This is Jesus’ way of teaching us how to respond through the virtues of love and peace.”

“Recently, one of our community families had an encounter with Bruce Love, a man who needs our prayers. We will offer our prayers today for Mr. Love,” he said.

“As children of our Heavenly Father, together, let us offer three Hail Marys for the well-being of Mr. Love,” the boy said.

At this point, the whole room turned to the crucifix on the wall and prayed three Hail Marys with a melody of young voices chiming in.

Finally, they young man concluded, “May God’s blessings be upon him. Jesus, meek and humble of heart, make our hearts like unto Thine.”

Regina Academy is a classical Catholic education school that has been presented as a model for reforming parochial education, and exhibiting the profound value and necessity of doing so in service to fostering the thriving of parish communities and, most important, the salvation of souls.

The mission page of the Academy’s website presents the goal of having their graduates prepared “intellectually, morally, and spiritually to go into their communities as virtuous leaders who will stand up to cultural pressures and transform society in the image of God.”

“Although the Houck children are homeschooled, many of their cousins and close friends attend the Academy,” Middleton said. And “the school children wanted to show support for the Houcks.”

On the Tucker Carlson show last night, a video of Mr. Houck was presented where he explained one instance of how he and his young son lived out this teaching of Jesus Christ to pray for one’s persecutors outside one of the abortion centers in Philadelphia.

In the clip, he shared how they had spoken to a woman leaving the facility and offered her post-abortion healing and then promised her prayers. After they began praying the Sorrowful Mysteries of the Holy Rosary on their knees, he explained how she began attacking them personally, “spewing all this vulgarity.”

Houck’s response was one of resignation. Out of love, he said, “this is what it’s going to take. This is what we have to do. This is part of the journey.”

LifeSiteNews broke the now-viral story of Houck’s Friday arrest by the FBI. The arrest stemmed from an alleged altercation between Houck and Love outside a downtown Philadelphia Planned Parenthood last year, where Houck was praying with his young son.

Prosecutors allege Houck, the founder and president of The King’s Men, which promotes healing for victims of pornography addiction and promotes Christian virtues among men, violated the Freedom of Access to Clinic Entrances (FACE) Act when he allegedly pushed an abortion clinic employee twice in one day in October 2021.

Houck pleaded not guilty to two counts on September 27 in a Philadelphia federal court.

The pro-life leader’s wife, Ryan-Marie, told LifeSiteNews on Friday the abortion facility worker had been harassing their son by using vulgar language and getting into the boy’s “personal space,” and that Houck had shoved him away to protect his son.

On Tuesday, Houck’s attorney, Thomas More Society vice president and senior counsel Peter Breen, backed up Ryan-Marie’s account of the October incident, explaining that Mr. Love had been “extremely aggressive” and was “harassing” Houck’s son before an “altercation ensued.”

Breen explained that the case against his client had been tossed out of the state courts but was picked up again by the Biden administration’s Department of Justice (DOJ) almost a full year later.

“This is a political prosecution,” Breen added. “And what’s clear from the Department of Justice at its highest levels, which is directing this case, [is] that they are trying to send a message to pro-life and people of faith: ‘Don’t mess with us.’”

“They want to intimidate — they want to cause good people like Mark to stop praying and counseling at the abortion clinics of our country,” the attorney said. “And that’s not going to happen.”