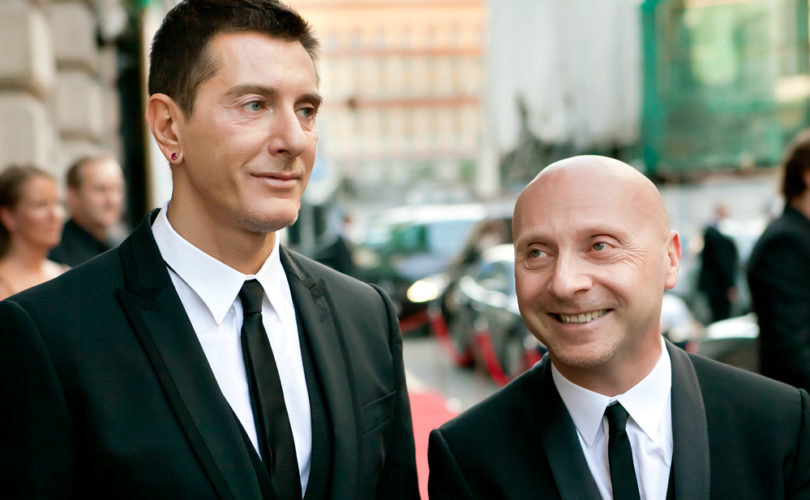 Note: To sign a petition to Dolce and Gabbana urging them not to back down from their remarks supporting traditional marriage, click here.

Gay activists, spearheaded by singer Elton John, have condemned the pair and urged a boycott of their fashion line after they told the Italian magazine Panorama that they oppose gay “marriage” and adoption, find in vitro fertilization unnatural, believe procreation “must be an act of love,” and that “the only family is the traditional one.”

The letter, published in Tempi this week, says the six signatories – five women and one man – “want to thank you for giving voice to something that we learned by experience: Every human being has a mother and a father, and to cut either from a child’s life is to rob the child of dignity, humanity, and equality.”

“We know that you will come under tremendous pressure, especially now when both Italy and the United States are being pushed to override our concerns for our rights to a mom and dad, in order to please a powerful gay lobby,” the group said.

They explained that it was their experience that, “Nobody receives more vicious attacks from the lobby than those who come from the gay community and question its policies: children of gay couples just as much as the gay men who defend them (like the two of you).

“You have shown yourselves to be extremely brave. You have given us great inspiration as all six of us prepare to submit letters to the US Supreme Court against gay marriage.”

“We want to praise your courage and thank you for your inspiration,” the signatories said, and implored Dolce and Gabbana “not to surrender when the backlash grows in intensity.”

“If you back down from what you said and apologize,” the group concluded, “it will leave the children of gay homes even more vulnerable and discredited. It is important for our sake, for the sake of Italian children as well, that you not apologize or capitulate. Please support the idea that all children need to be bonded with their mothers and fathers. It is a human right.”

“It's not us who invented the family,” Dolce said in the recent interview in Italy’s Panorama magazine. “You are born and you have a mother and a father.

“Or at least it should be so, that's why I'm skeptical about what I call the sons of the chemistry, synthetic children, wombs for rent, seeds chosen by a catalog. And then, let's go to these children and explain them who is their mother. Would you ever accept to be a daughter of the chemistry? Procreation needs to be an act of love.”

“There is a supernatural sense of belonging” in the family Gabbana added.

The English translation of the letter titled “Dear Dolce & Gabbana- a letter of support from children of gays and lesbians” is available on the blog asktheBigot.