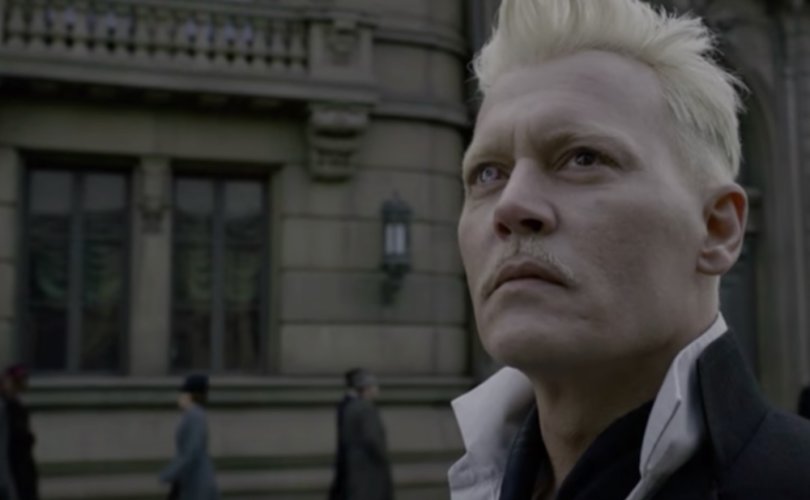 Johnny Depp as Gellert Grindelwald in Fantastic Beasts: The Crimes of GrindelwaldYouTube

March 19, 2019 (LifeSiteNews) – Harry Potter creator J.K. Rowling has once again opined on the subject of her characters’ sexual attraction, in the process pleasing neither pro-family audiences nor pro-LGBT activists.

During her 2007 tour for the final book of the original Harry Potter series, Rowling told a crowd that the elderly mentor “Dumbledore is gay, actually,” despite the character’s sexual attraction not being referenced in the books themselves. The bombshell earned her accolades from pro-LGBT activists but also criticism from parents concerned about exposing their kids to adult and morally objectionable themes.

Pro-LGBT fans were pleased to see homosexual “representation” in the popular children’s franchise but disappointed the detail was confined to the creator’s commentary rather than being clear in the actual text. They hoped the situation would be rectified with the Fantastic Beasts films, a prequel series exploring the backstory of characters like Albus Dumbledore.

In particular the second Fantastic Beasts movie, The Crimes of Grindelwald, was set during the period when Rowling says a young Dumbledore (played by Jude Law) fell in love with and was ultimately heartbroken by the titular Gellert Grindelwald (played by Johnny Depp). IGN reports that Rowling addresses the topic in a behind-the-scenes feature included with the movie’s home video release.

“Their relationship was incredibly intense. It was passionate, and it was a love relationship,” she said. “But as happens in any relationship, gay or straight or whatever label we want to put on it, one never knows really what the other person is feeling. You can’t know – you can believe you know.”

“So I’m less interested in the sexual side – though I believe there is a sexual dimension to this relationship – than I am in the sense of the emotions they felt for each other, which ultimately is the most fascinating thing about all human relationships,” Rowling added.

Rowling’s comments are the latest in a contentious back-and-forth between the author and her own fans over her assertions not matching what appears on the page or screen. Last fall, director David Yates teased that the November 2018 release would “doesn’t focus on his sexuality,” but makes “clear in what you see […] that he is gay. A couple of scenes we shot are very sensual moments of him and the young Grindelwald.”

The film featured a moment of Dumbledore gazing at an image of Grindelwald through a magical mirror that “shows a person their heart’s truest desire,” but lacked express confirmation of a homosexual element. “Fantastic Beasts 2 re-closets Dumbledore in an act of queer-baiting that is a detriment to the story it’s trying to tell,” Delia Harrington complained in Den of Geek’s review of the movie.

Accordingly, many pro-LGBT fans have taken Rowling’s latest comments as too little, too late, based on reactions collected by CNN and Breitbart:

J.K. Rowling Confirms Some Characters in Her Books and Movies Are Gay Everywhere Except in the Books or the Movies https://t.co/Y5gcbMWNB9

Like, way to miss the point and undermine everything you COULD have done to rectify the mistake of leaving Dumbledore’s orientation out of canon. This further reduces queer relationships and queer characters just to sex in media commentary. Which is the last thing we needed.

imagine writing a series that deals with the way the adults you look up to can turn out to be actually Not Great People who actively harm kids with by clinging to and reinforcing problematic views and then…………deciding to be living example of that. amazing.

Yates, Law, and Rowling have previously suggested that a full exploration of Dumbledore’s homosexuality may be held for future Fantastic Beasts movies, but the LGBT lobby appears to be out of patience with waiting.

Rowling is an outspoken liberal who has called President Donald Trump a “fascist,” condemned the Mexico City Policy for barring U.S. foreign aid to abortion groups, and suggested that God is a black woman.

Critics of Harry Potter, such as the late Vatican exorcist Father Gabriel Amorth and Pope Emeritus Benedict XVI, say the series' subversive themes can negatively predispose children to curiousity about the occult.