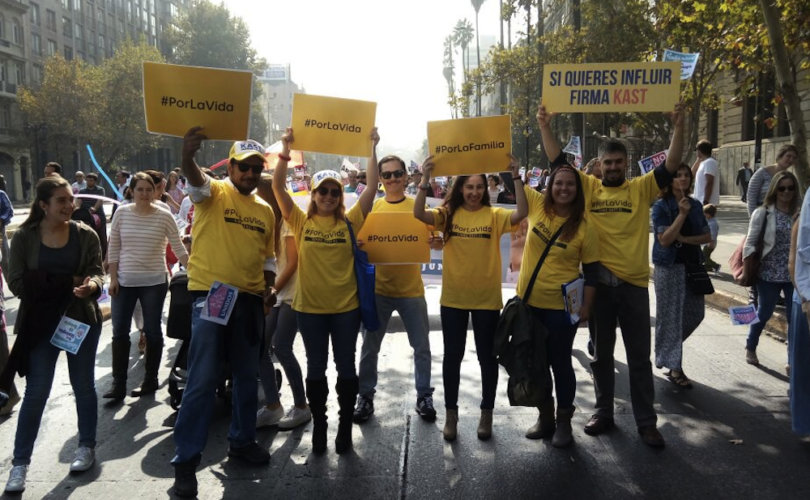 March for Life in Chile

SANTIAGO, Chile, March 29, 2017 (LifeSiteNews) — A “massive” pro-life march brought Chileans together to stand for the sanctity of innocent human life on Saturday.

With the country moving toward legalizing abortion, concerned citizens took to the streets on the Feast of the Annunciation, March 25, to oppose “killing our children.” Chileans call the feast a celebration of “The Day of the Unborn Child.”

As many as 10,000 pro-lifers marched down Santiago's main street, according to organizers. Other pro-life rallies or activities took place in seven other Chilean cities including Villarrica, where thousands of pro-lifers rallied in response to the local Catholic Church's call.

The mood for the march was festive. Men, women, and children carried colorful balloons and happily danced and interacted. Some held signs reading “Chile No Mates” (“Chile, don't kill”).

President Bachelet's abortion proposal now being considered in the Senate would legalize killing an unborn child who presents a threat to his or her mother's life, or a child whose intrauterine diagnosis indicates he or she may have a condition incompatible with life, or a child conceived through rape.

On January 25th, the Chilean Senate, with the votes of 3 Christian Democrat senators approved “the idea of legislating” on the abortion issue – 20 Yes, 15 No, and 2 abstentions.  The Senate commissions are currently studying recommendations on the details of the legislation. The full Senate is expected to possibly vote on a final version in April.

Pro-life leaders have not given up hope to stop the bill. International pro-life experts see Chile as a “light to the world” due to its current model legal system where both mother and unborn child are protected equally in law, and for its excellent care for pregnant women. Chile has the lowest maternal mortality rate in Latin America. Many are praying that the abortion proposal will be ultimately rejected and Chile’s light will continue to shine.