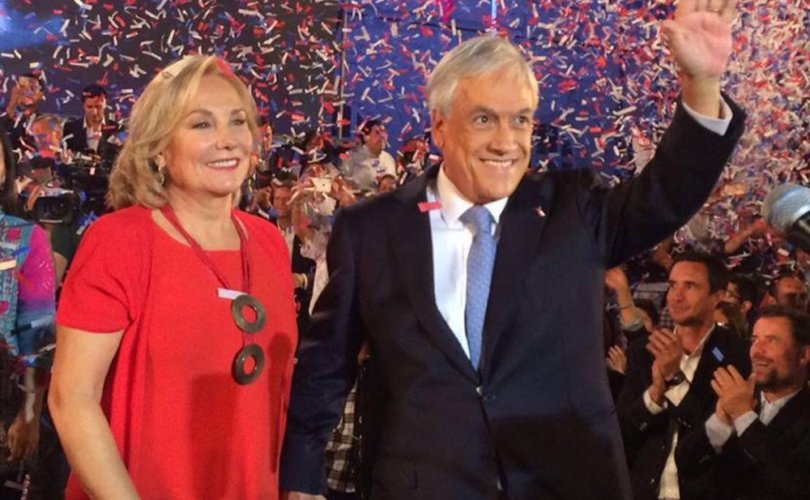 In 2011, a group of pro-life organizations active at the United Nations presented the Pinera with an award for Chile’s then complete prohibition of abortion. The award recognized how his government had maintained policies caring for women facing difficult pregnancies and promoted the value of human life via television campaigns.

Pinera’s victory this past weekend was a significant relief for the pro-life cause, pro-life advocates say, but just how much so remains to be seen. Pinera’s win means the reversal of Chile’s legalization of abortion, which took place earlier this year, is more likely.

A Guillier presidency would have ensured a continuation of the pro-abortion policy of outgoing president Michelle Bachelet.

It was under her leadership that legal abortion came to Chile after three decades of no legal abortion. The legalization was ushered in with the “limited” circumstances of rape, fetal disability, and life of the mother exceptions.

Abortion advocates had been pushing to legalize abortion in Chile for years. Protest marches both for and against have been conducted throughout the roughly two-thirds Catholic country.

Before abortion was legalized, mothers and their unborn children were protected equally under Chilean law. The country had the lowest maternal mortality rate in Latin America, even rivaling or achieving a lower rate than that of the much more economically developed United States.

Bachelot won key votes and the support of politicians of the Christian Democratic Party. Also helping her was the public’s unawareness of this danger and how “limited” abortion is used to usher in abortion on demand.

Guillier had supported the decriminalization of abortion.

The strong pro-life candidate for president in Chile’s primary elections was lawyer and politician Jose Antonio Kast, who then swung his support to Pinera for the final election.

Key pro-life leaders then worked hard for Pinera's election, along with other strong pro-life senators, such as Manuel Jose Ossandon and Francisco Chauhan, who actively campaigned for Pinera.

“The support of Jose Antonio Kast has been critical for Pinera's election victory,” said Carlos Polo, director for Population Research Institute in Latin America. “We all recall that as soon as the results of the first round of elections were known, Kast publicly came out in support of Pinera.”

“That political gesture was decisive,” Polo told LifeSiteNews. “Respect for the life of unborn children from conception, and marriage between a man and woman are basic points for Kast voters. It's up to Pinera to honor that support.”

Pinera won roughly 37 percent of the vote in the election’s first round on November 19 to Guillier’s almost 23 percent. Twenty percent voted for Beatriz Sanchez of the leftist Broad Front coalition. Five other candidates, including Kast, split the remainder. Pinera needed 50 percent to avoid the December 17 runoff.

Pro-life leaders are hopeful that, with help from the Catholic Church, they can harness Pinera’s win to reverse the current abortion situation.

Pinera will take back the presidential office on March 11, 2018.