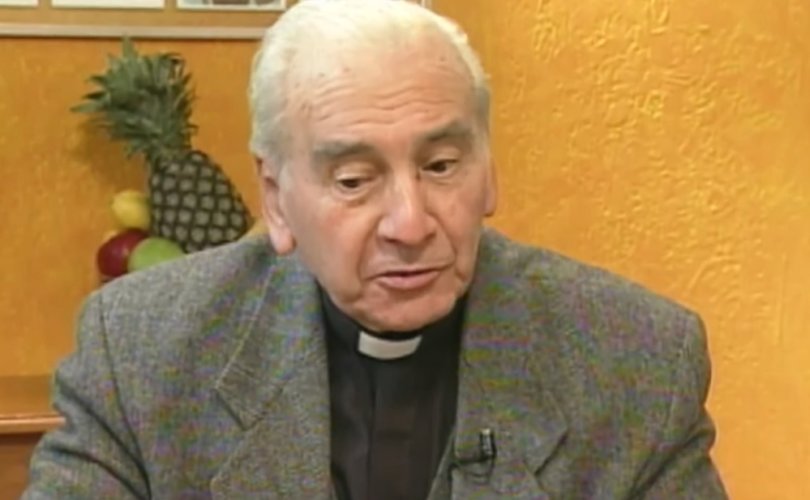 SANTIAGO, August 14, 2019 (LifeSiteNews) — An internal investigation by Jesuits in Chile revealed that Jesuit priest Renato Poblete had committed over 50 years of sexual and emotional abuse of women and girls as young as three years old.

Rev. Renato Poblete, S.J. was the chaplain of the Hogar de Cristo (Spanish for “Christ’s Home”), which was founded by Father Alberto Hurtado in the 1940s as a charity and shelter for the poorest of the poor. As a successor to the saintly Hurtado, Poblete is believed to have abused 22 female victims, of whom there were three minors, including a three-year-old girl. The abuse stretched from 1960 until 2008, just two years before the abuser’s death. Compiled by attorney Waldo Brown at the Jesuits’ request, the probe recorded the recollections of the victims, who recalled their manipulation by Poblete. One of the victims was a nun, who accused Poblete of assaulting her in a confessional.

Poblete is accused of using his authority as a priest and charity executive to compel his victims into sexual situations. “Without me, you people wouldn’t eat”; “If you’re fat, you won’t get anybody”; and “Rape is inevitable: just relax and enjoy it” were among Poblete’s remarks to the victims, they allege. The report also alleges that the abuses continued for nearly fifty years, which included beatings. The report noted the apparent impunity with which Poblete operated, as well as a cover-up in which at least 15 fellow priests cooperated.

Poblete died in 2010 at the age of 86, but not before receiving one his country’s highest awards for public service. He served at Hogar de Cristo from 1986 to 2000. During his lifetime, many Chileans thought of him as a living saint, naming a park in his honor after his death, complete with a bronze statue in his likeness. Since the accusations became public, the statue was taken down.

President Sebastián Piñera of Chile, a Catholic who considered Poblete a mentor, expressed shock and anger at the revelations in the Jesuit report. On a morning talk show, the president said: “For me, personally, this has been like an earthquake because in life one needs reference points, persons in whom one can confide, love, appreciate, admire. And Father Poblete was one for me.”

According to the report, seven Jesuits received information over the years about Poblete. Of these, five admitted to hearing rumors or comments made by third parties, two received information directly from victims, one received a request from a victim to refrain from reporting, while another made a formal accusation. The report determined that the failure to act on the rumors and reports did not meet the definition of a criminal cover-up. It was Father Jaime Ochagavia, S.J., a companion of the saintly Father Hurtado, who reported Poblete to the Jesuit provincial. The report indicated that no further action was taken.

According to reports in Chilean media, a spokesman for the victims, Daniel Palacios, described Poblete as a criminal. He also questioned the Jesuits — the Society of Jesus — on how they could have failed to report Poblete’s crimes. Helmut Kramer of Chile’s Network of Survivors of Church Abuse called Poblete a sadistic sexual criminal.

Poblete once said in an interview that he modeled himself on the founder of Hogar de Cristo, Fr. Hurtado, who died in 1952 and was declared a saint by Pope Benedict XVI in 2005. Hurtado was renowned in Santiago, Chile’s capital city, for seeking out impoverished street children and bringing them to the refuge he devised in 1944. Despite what spokesmen for Chile’s Jesuits said was a thorough Vatican investigation leading to Hurtado’s canonization, prosecutors in Chile said the saint is not above a criminal investigation despite having died decades ago and a reputation that had remained unblemished until now.

Marcela Aranda, who has been identified as the woman with whom Poblete had the most enduring relationship, has accused him of hearing her confession and then administering the Sacrament of Reconciliation after another one of their sexual encounters. Of the six women with whom Poblete had serial relations, only two gave testimony. Two of them did not consider their relations abusive, while the remaining two are dead. Aranda (53), who is now a professor of theology at the Pontifical Catholic University of Chile, accused Poblete of forcing her to abort three of her babies. “He took me to where other men raped me and beat me by turns,” Aranda told local media. According to Aranda, Poblete began abusing her when she was 19.

In a televised interview, Aranda said that “what is most terrible and makes me suffer is that he forced me to abort not just once but three times. Three children who I could never embrace, wiped out by a horrible man.” Aranda first revealed her history with Poblete to a Vatican commission led by Archbishop Charles Scicluna, who investigated accusations of abuse committed by Chilean clergy.

Fr. Cristian del Campo, S.J., provincial for the order in Chile, told a July 31 press conference that it was thanks to Aranda that the investigation was begun in January. Apart from the four minors, Del Campo said the remainder of the victims were adult women who had suffered “unwanted and violent sexual assaults that included attempts at kissing and touching.” He said fellow Jesuits never suspected Poblete.

According to Father Del Campo, the investigation carried out for the Jesuits determined that Aranda’s accusations against Poblete are “plausible and believable.” The remainder of the accusers did not wish to reveal their identities, while Del Campo urged them to give their testimony to civil authorities once they are prepared to do so. A summary of the 407-page report has been given to prosecutors.

At the press conference, Del Campo begged forgiveness for the Jesuit order as a whole, recognizing that it had failed to take appropriate action in earlier years and heed the victims. He announced the founding of the Center for Prevention of Sexual Abuse and Healing by the Jesuits in Chile. He said that the group will serve to listen to victims and receive accusations of sexual abuse committed by any member of the Society of Jesus. It will be led by attorney María de los Angeles Solar and psychologist Francisca Salinas.