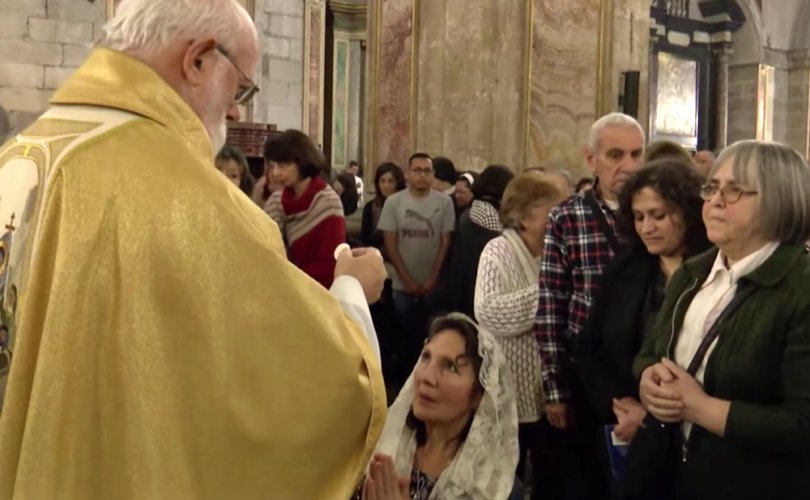 May 8, 2019 (LifeSiteNews) — The Chilean bishop who denied Communion last month to Catholics kneeling to receive the Eucharist at a diocesan Mass has since distributed the sacrament to the faithful who were kneeling at a subsequent Mass.

The Archdiocese of Santiago de Chile posted two photos on its Facebook page of Bishop Celestino Aós distributing Communion to kneeling Catholics at a Divine Mercy Mass on April 28.

The text with the post says only that Aós is observing Divine Mercy at the parish. The translated version stated:

Aós had refused to administer Communion to Catholics who were kneeling at an April 18 Chrism Mass at the Cathedral of Santiago de Compostela, and the video created a backlash on social media.

Catholics may receive Holy Communion while kneeling and should never be denied on that basis, according to the Congregation for Divine Worship and the Discipline of the Sacraments’ 2004 Instruction Redemptionis Sacramentum.

The Vatican-sanctioned Missal for Argentina, Chile, Paraguay, and Uruguay states plainly that both options are possible unless a bishops’ conference dictates differently, which the Chilean conference has not done.

The Chilean guidelines further dictate that faithful who do not kneel should make another sign of reverence before receiving Communion.

Aós is the temporary head of the Archdiocese of Santiago, Chile, beset by controversy related to the Church’s clergy sex abuse scandal.

Aós’ denial of Communion to Catholics wasn’t the only controversy connected to the Santiago archdiocesan Chrism Mass.

Ezzati, who is under investigation by civil authorities for cover-up and also been named in a complaint for failure to report the rape of an adult male that allegedly occurred in the Santiago cathedral, took part in the entrance procession for the Mass, Crux reported.

Several priests walked out of the Chrism Mass. Crux identified at least two of the priests, including one who had sent video of Aós denying Communion to the kneeling Catholics.

Ezzati was one of several Chilean bishops being investigated for abuse or cover-up in Chile who appeared at Holy Week liturgies.

Some of the accused bishops were discreet about their Holy Week appearances. At the same time, others were concelebrants to the apostolic administrators appointed to replace them.

Aos’ withholding Communion to the Catholics and allowing Ezzati to partake in the Chrism Mass, according to Crux, “enraged many in Chile.”